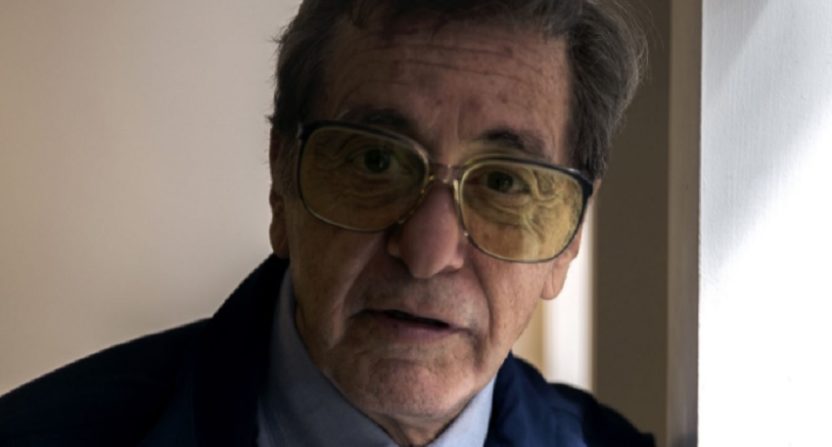 We’ve known for quite some time that Al Pacino was going to portray legendary Penn State football coach Joe Paterno in a HBO biopic. Earlier this summer, details of the production were released, with the story being less of a career-spanning biopic (based on Joe Posnanski’s biography), but more of a focused narrative on the aftermath of the Jerry Sandusky scandal and how his legacy was affected by the lack of institutional control around his program during that time.

Shortly after being fired as Penn State football coach in 2012, Paterno died due to complications from lung cancer. He was 85 years old.

Considering how long it’s taken to develop this Paterno film, it would be natural to question how long it might take to finally get a finished product to the screen. But on Sunday, HBO released a photo of Pacino as Paterno that should signal that this production is ready to get underway. (Or at the very least, get people thinking about what Pacino looks like as Paterno with make-up and so forth.) Filming is reportedly taking place through September.

Here’s a look at Al Pacino as Joe Paterno for the upcoming, as-yet-untitled film (IMDB lists it as “Happy Valley“), directed by Barry Levinson.

Playing real-life figures who became infamous late in the lives has become something of a career for Pacino. In previous HBO biopics, he’s portrayed Jack Kevorkian and Phil Spector.

In addition to the Pacino photo, HBO released a few more casting details. Riley Keough (The Girlfriend Experience) will play reporter Sara Ganim, who first brought this story to light for The Patriot News as a 23-year-old. (She eventually won a Pulitzer Prize for her investigative work and is now a reporter for CNN.) Kathy Baker is cast as Paterno’s wife, Sue, while Greg Grunberg will play his son (presumably Jay, who was on his father’s coaching staff at Penn State). Annie Parisse is portraying his daughter, Mary Kay.

As of yet, no one has been announced to play Jerry Sandusky, but it’s possible that he won’t have that much of a role in this story. That may apply to Penn State administrators Tim Curley and Graham Spanier, who were sentenced to prison in connection with the Sandusky scandal, as well. The narrative may very well focus on Paterno and his family.