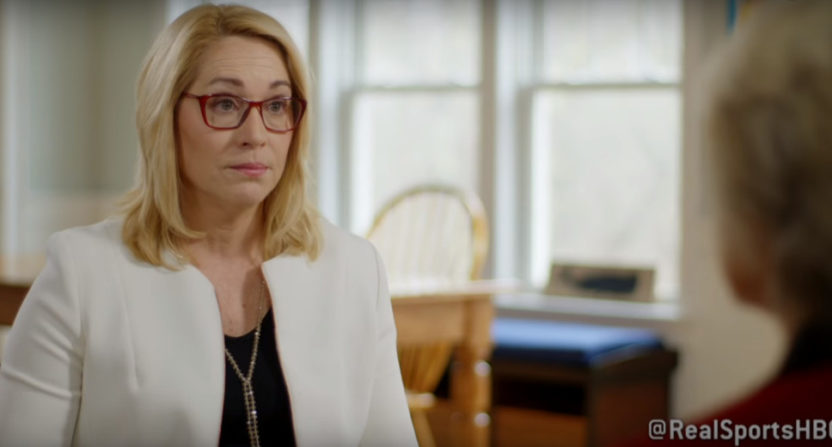 This fall, Doris Burke became the first woman to serve as a regular game analyst for a national NBA package, getting that call for ESPN after over a decade at the network as a sideline reporter and occasional guest analyst on NBA games and as a regular analyst for men’s and women’s NCAA games (she gave the latter role up last spring to focus on the men’s game).

HBO’s Real Sports with Bryant Gumbel features Burke in a 10-minute “She Got Game” segment from Andrea Kremer tonight (the program airs at 10 p.m. Eastern/Pacific), which includes an extensive interview with Burke, an interview with colleague Jeff Van Gundy, and lots of clips of Burke’s broadcasts over the years.

There’s a lot of interesting commentary in there, from Burke describing some of the pushback she’s received for being a woman in what’s perceived as a man’s job to her talking about how producers told her to change the way she dresses to receive better assignments (something she’s discussed before) to Van Gundy saying she’s even better as a NBA analyst than he is (something he’s also mentioned before).

But what’s perhaps most notable is the way the segment closes. It involves Burke discussing how she won’t opt for plastic surgery, and how she wants to see female broadcasters able to continue high-profile jobs in their 60s without criticism of their appearance. As she notes, male announcers don’t usually receive much blowback there.

“I promise you I’m not having plastic surgery. I’m 52. I’ve earned every wrinkle on my face. I actually like my wrinkles. And guess what? There are a lotta 60-year-old men who have wrinkles, no hair, glasses, and nobody gives a damn. It’s about time that a woman my age or above, if she chooses to go into her 60s as an announcer, she should be allowed to do just that.”

Burke is absolutely right there, and it’s highly unfortunate that there’s been so much commentary directed at female broadcasters’ appearance and so few prominent roles for older female broadcasters when that isn’t anywhere near the case with male announcers. One of the themes of the overall piece is about Burke wanting to be known for her analysis rather than her appearance, and this closing commentary certainly fits there.

Here are some other comments she makes along those lines from earlier in the program:

“Just listen to what I say. Don’t look at — you know, what does my hair look like? What is my outfit? Just listen to what I have to say. …“Listen. I understand their objection, Andrea. When something in life is new you might recoil from it initially. And I could tell you of people, men, who have come up to me and said when I first heard you, I’m thinking, ‘What is she doing there?’ But then I listened. And you’re okay.’”

It’s worked out well for Burke so far, with her knowledge and insight praised by everyone from Van Gundy to LeBron James to Drake. But even with that, it was challenging for her to earn a regular analyst role on ESPN’s NBA broadcasts. She says that happened thanks to Van Gundy encouraging her to make it clear she wanted the job after Doug Collins left ESPN in September to join the Bulls. She pushed for the job and got it, and it was an incredibly emotional moment for her.

Here’s a clip from the interview discussing that:

The whole segment on Burke is quite well done, and it’s well worth checking out for those interested in her career and wider issues women in sports media face.

The Real Sports with Bryant Gumbel episode with the Burke piece will air on HBO tonight at 10 p.m. ET/PT (9 p.m. Central).