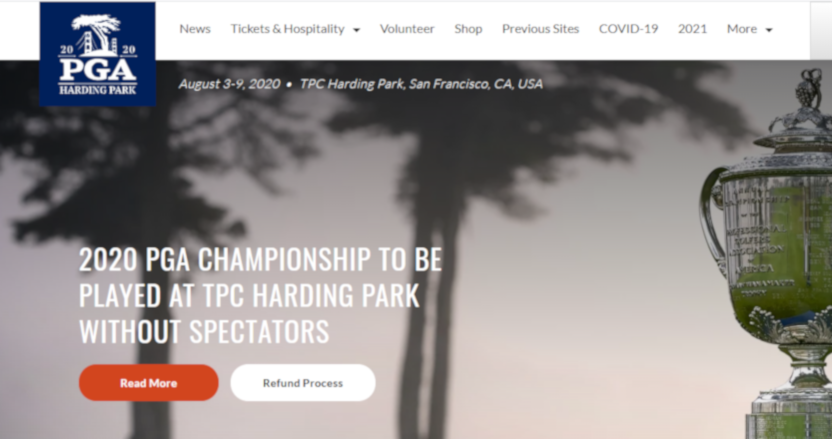 While the 2020 PGA Championship is set to be held at TPC Harding Park in San Francisco from August 3-9 (moved from the original May 14-17 dates), it will be held without fans, and media access will be very different as well. The PGA of America sent out an e-mail on media policies for the new event (which will be the first golf major to actually be held this year) Wednesday, revealing that only a limited number of outlets will be allowed to cover the event in person. Here’s more from that e-mail:

This is all relatively understandable. Many of the sports that have resumed so far have done so with minimal or no on-site media access. Interestingly enough, though, while the PGA Tour proper has resumed without fans, it’s already had some on-site media access, and there have been lots of stories filed from the sites. (The broadcasts have seen a lot more remote work than normal, though.) So it seems like the PGA Championship media restrictions may be tighter still (of course, that depends on what “a limited number” actually is). And that could be related to current COVID-19 restrictions in San Francisco in particular and in California as a whole, which remain tighter than in some other places.

But this definitely seems unfortunate for many media that had planned on covering this tournament in person. And while the virtual access is better than nothing, it won’t be the same. That’s especially true with a setup that has no ability for one-on-one interviews. Group interviews over video conferencing aren’t as good, and won’t provide as interesting pieces.

However, safety is a huge concern for everyone at the moment. And the PGA Tour is definitely seeing that this week with multiple players withdrawing from this week’s Travelers Championship after either they or their caddies tested positive for COVID-19. And limiting the amount of people at an event certainly has some merit as a precaution, and it’s positive to see the PGA of America already reaching out to media to advise them of the new plans and what they’ll be doing to try and facilitate remote coverage. We’ll see how this pans out.