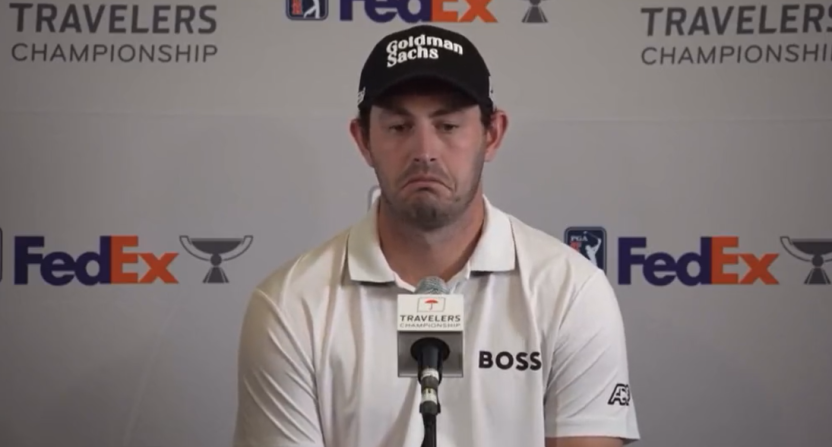 Even with a major last week, the nascent Saudi-backed image laundering venture LIV Golf continues to be the dominant storyline in men’s golf.

The PGA Tour today outlined the first steps in their response, boosting prize money at some of their biggest events and announcing plans for new big-money events on top of what’s already on the schedule.

Considering the weight of the LIV/PGA Tour standoff and the fact that LIV continues to poach talent, players taking the media center dais at the Travelers Championship had to know they’d be asked about it. If Patrick Cantlay spent any time preparing his response, he hid it very well.

“My team handles all that kind of stuff, whether it be just any of the sponsors that I have or anything in that department. I haven’t had any direct contact with them recently. So I really, you know, I don’t have anything like that outstanding.”

So, hey, that’s certainly one way to answer what should have been a fairly straightforward, yes-or-no question! If anything, it reads much more as confirming that discussions have taken place, especially with the key use of “recently” in there.

In fairness to Cantlay, he had already answered a lot of questions about LIV and his thoughts on the growing schism, with somewhat more openness, although those answers were pretty much directed outwards. For anyone who wanted to read more into things, he also noted he skipped the big meeting between players and PGA Tour commissioner Jay Monahan.

But, really, this is less about whatever Cantlay does or doesn’t decide to do and more about just how he managed to string those sentences together. You’ll rarely see such a fascinating, difficult to diagram non-denial denial. It’s not a masterclass in obfuscation, because he doesn’t actually obfuscate anything!

Before and after the media cast a dark cloud over the Travelers Championship. pic.twitter.com/DZUm8bDfs7

What an answer. If (maybe when, depending on your interpretation) Cantlay is LIVing it up within the next year or so, it will be hard not to flash back to this particular press conference answer.