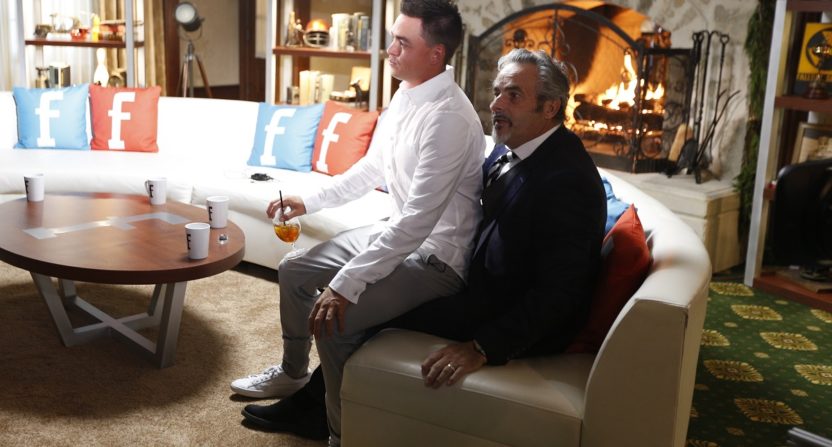 His Golf Channel show Feherty returns for an eighth season next Monday at 9 PM with guests Jack Nicklaus, Rickie Fowler, and tennis player Bob Bryan. David was kind enough to speak to Awful Announcing about his Olympic experience, where to draw the line with fan conduct at golf tournaments, and Tiger’s potential resurgence.

You just got back from covering your first Winter Olympics; how was that experience?

It was really fucking cold! That was the first thing I noticed about it. Much colder than the Summer Olympics. You know, Rio was kind of weird, I guess. The culture was a little different. The town itself was kind of a shock, to see it. South Korea is like a different planet, culturally. It was really a very interesting experience being there.

The people were really nice, very kind, very helpful. Not a whole lot of English spoken, but what English was spoken was better than my Korean, so I didn’t complain. The international broadcast center was just so massive. I had forgotten what it was like, in Rio, and it seemed like it was in equal size to the Summer Games. It’s just a huge operation, and to be a part of it was really cool.

You’ve covered both the Winter and Summer Olympics now. If NBC said “David, we love you so much, obviously, but we can only put you on one of them going forward, but we’re going to let you choose.” Do you have a preference?

I would go with the Winter Games. I fell in love with a couple of the sports that are so different when you get to see them live. The short track speed skating was just unbelievable. It really was. The ski jumping was incredible to see. All of the sliding sports. The curling I was very interested in because I did a piece with Matt and Becca Hamilton, the two from Madison, Wisconsin, the blood brother and sister that competed. And of course Matt was on the winning U.S. team. That was really cool.

I stayed up until four in the morning watching that final the other night.

The eighth season of Feherty premieres next Monday, correct?

Sorry, you’re probably time-zoned out, I should have gone with the date.

Yeah, I don’t know whether I’m blown up or stuffed.

There’s a new roundtable format; is that a different challenge for you, being more of a moderator than a straight interviewer?

It is a challenge, and it’ll take a little getting used to, I think. I’ve shot four episodes now and I’m a little more comfortable with it. Having either two or three guests on a semi-circular sofa, it’s been interesting. You get the crosstalk that the guests have with each other and I can sit out a little bit. It’s been fun.

On the premiere episode you have Rickie Fowler and Jack Nicklaus; it’s obviously tough to compare any player to Jack, but those are two players who are, respectively, faces of very different eras in golf. Can you share anything interesting that came out of that conversation?

Well, Jack’s take on anything is interesting, as the greatest ever. What I thought was interesting to viewers is the relationship he has with players like Justin Thomas and Rickie Fowler and Jason Dufner, kids that are members of the Bear’s Club. There are probably, boy, 15 of them, who don’t just have Jack’s number, but who come around the house with him and Barbara. Jack loves to see them, and he loves giving them advice. I think it’s really cool for both Rickie and Jack.

It feels like golf is in many ways a completely different sport than when Jack played.

It’s interesting that he’s still able to develop those relationships and connections with players now.

It is a different sport, much more sort of blast and go find it now. Whereas Jack was a great technician, playing golf courses backwards, wanting to know where he’d leave the ball, stuff like that. But that’s the sort of thing you need to know when you’re playing an Open Championship. Any time the Open is played, Jack won so many of them, these kids will get on him about what way they should play it, what advice does he have.

You have a run of five weeks of tournaments on NBC starting this weekend. It’s an interesting part of the golf calendar, before the Masters, with two WGC events, and there’s a really fun tournament in Tampa at Innisbrook. I wondered if there’s any event in particular you’re looking forward to over the next few weeks?

Yeah, I always enjoy Tampa. Innisbrook is kind of a cool course, and it’s got the Snake Pit there, there’s a little raucousness to it, which I really like. I like to see that. I don’t want to see Phoenix every week, but I think we can get a little more energetic. I don’t want to see the sort of thing that happened to Justin Thomas, where people are making negative remarks, shitty behavior like that. But the crowd being louder, and a little more out of control, I’m all for it.

I wrote about the Thomas incident yesterday, I wondered if you had any thoughts on it. It’s a fine line, and anything yelled out during a player’s swing, and anything vulgar, there’s certainly no place for that.

I missed it. I heard about the incident, I didn’t see it on television. There was something on SportsCenter this morning, where he just had the guy removed. If someone’s following you, kind of stalking you, making negative comments, that’s not part of our game. I understand people shouting “You da man!” and all that, although I think there should be summary execution for that kind of thing, that particular one. “Mashed potatoes!” Yeah, absolutely. Dragged off the arena.

But I don’t think there’s any place for someone who has a vendetta against a player.

The Ryder Cup’s a good example of people rooting against, but they root against after the fact. There’s none of it before a shot is taken. It’s applause afterwards, yelling and screaming, that kind of thing, if a putt is missed. If it starts getting where people are heckling before a player hits a shot, that’s an issue.

I have an obligatory Tiger question, as you might expect.

He had a really good week at the Honda, and it feels different this time than it has the past few years.

He looks different to me. I didn’t get to see much of him this week but a few swings. His body language is a little different, he’s carrying himself a little higher. It’s as if something’s happening, you know. Maybe the beast is awakening, I don’t know. But I know if he plays well, he’ll win and if he can stay healthy, he’ll play well. It all comes down to the back. If it holds up, I think you’ll see him win again.

Tiger did so much for the game, he laid the foundation for where it is. Then he was gone for a few years, which created an opportunity for other players to become stars. We haven’t had the chance to see Tiger playing at his best alongside this new crop of talent. With this comeback now, how big of an opportunity for golf is this over the next few years?

The game is so much better with him in it. The game has been really good with these kids we have at the top of the game at the moment. It’s been phenomenal for the last few years, but people have short memories. If you saw the crowds Tiger has drawn these last weeks, dwarfing the crowds of the last group. People just want to get a glimpse of him. It’s extraordinary the effect that he’s had and continues to exert on the game. It really is something to see. If he can get back into contention, playing well again? Boy.

Thanks for taking the time, David, it’s actually been an honor for me to talk to you.

Well, thank you for having such low standards!