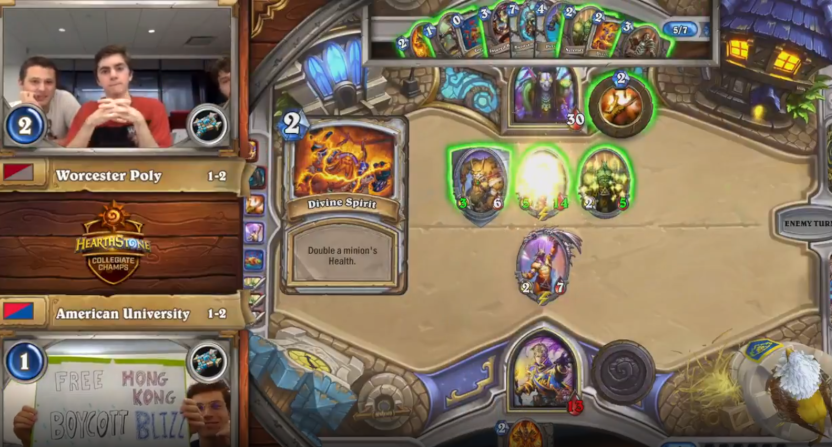 There’s been a lot of discussion of the NBA/China fights in the wake of Rockets’ GM Daryl Morey’s tweet in support of Hong Kong protesters last Friday, and of ESPN’s coverage of that saga, but what’s going on with Blizzard Entertainment is perhaps just as notable. The U.S.-based video game company (a subsidiary of Activision Blizzard) first got embroiled in this thanks to a post-game stream of the Asia-Pacific Grandmasters pro Hearthstone circuit Sunday, where Hong Kong-based player Chung “Blitzchung” Ng Wai pulled on a mask and said “Liberate Hong Kong. Revolution of our age!”

That led to Blizzard taking away Wai’s already-earned prize money and banning him from Hearthstone competitions for a year, plus firing the two casters who were broadcasting the stream (even though they weren’t involved in the protest). And that in turn has led to a whole further cycle of back-and-forth events. One particularly significant one came Tuesday night during a stream of the Collegiate Hearthstone Championships, when students involved from Washington, D.C.’s American University held up a protest sign urging a boycott of Blizzard, leading to the broadcast quickly cutting away:

in tonight's Collegiate Hearthstone championship, American University held up a "Free Hong Kong, boycott Blizzard" during the broadcast, which was quickly cut away by Blizzard pic.twitter.com/Y9eXtLfuGw

That then led to Blizzard declaring there would be no further interviews on the stream, and to them pulling the video from their Twitch channel, but it’s wound up everywhere else. Also Tuesday, Blizzard’s own employees staged a walkout:

Scoop: Blizzard employees walked out of work yesterday over the company's decision to ban a pro-Hong-Kong professional Hearthstone player. They held an all-day protest at the Orc statue in the center of the company's Irvine campus. https://t.co/bWNbMiovws

So there’s been internal criticism for the company, and there have been further waves of criticism for them elsewhere. The Blizzard subreddit has been deluged with complaints recently, which led to it briefly being set to private and locked by a single moderator, who was then later overruled. Blizzard’s own forums for Hearthstone, World of Warcraft and Overwatch have also seen intense discussions on this.

And Wednesday saw caster Brian Kibler, who was set to cast the Hearthstone Grandmasters finals at BlizzCon (Nov. 1-2 in Anaheim, CA), resign from that role thanks to his issues with how Blizzard has handled this. Kibler laid out his reasoning on his website (and in a Medium post if the website’s down thanks to traffic), saying he thought what Blitzchung did was brave, but Blizzard was correct to penalize him, but the penalty was “incredibly harsh.” The whole post is worth reading, but here’s that section:

The punishment meted out to Blitzchung is incredibly harsh. I could understand a fine, or even a short suspension from competitive play, but removal from Grandmasters, clawing back the prizes he already earned, and banning him for a full year seems completely overboard to an extent that feels completely unwarranted and unfair.

I won’t pretend to understand either the intricacies of the geopolitical situation in China and Hong Kong or the full extent of Blizzard’s business interests there, but to me this penalty feels like it is deeply rooted in both. The heavy-handedness of it feels like someone insisted that Blizzard make an example of Blitzchung, not only to discourage others from similar acts in the future but also to appease those upset by the outburst itself.

That kind of appeasement is simply not something I can in good conscience be associated with. When I learned about the ruling, I reached out to Blizzard and informed them that I no longer feel comfortable casting the Grandmasters finals at BlizzCon. I will not be a smiling face on camera that tacitly endorses this decision. Unless something changes, I will have no involvement in Grandmasters moving forward.

The business interests there are definitely a notable part of this. China is a big market for Blizzard’s games, and there are four Overwatch teams based there, but even more significantly, Chinese internet company Tencent (yes, the same one that’s shut down their $1.5 billion NBA broadcasting deal at the moment) owns 4.9 percent of Activision Blizzard. So yes, Blizzard has a whole lot of reasons to not offend the Chinese government, and that may be a factor in their actions here.

And backlash against Blizzard has continued in interesting ways. Another one, thanks to a thread on the Hong Kong subreddit, has seen people turning Chinese Overwatch hero Mei into “a “pro-democracy symbol” to get “Blizzard’s games banned in China.” And there have been plenty of in-game protests, protests using game art, and on-stream protests.

Blizzard is trying to keep this photo off the internet. pic.twitter.com/XwlyRqZIka

Pretty much any blizzard stream is being flooded with messages in support of HK. Streamers are speaking out.

Before this week, few of these people really paid attention to what was happening in HK. Now they've been asking questions, getting involved in activism.

There are also lots of people cancelling subscriptions to games like World of Warcraft and posting about that. One of those is Mark Kern, a designer who worked on the game:

This hurts. But until Blizzard reverses their decision on @blitzchungHS I am giving up playing Classic WoW, which I helped make and helped convince Blizzard to relaunch. There will be no Mark of Kern guild after all.

Let me explain why I am #BoycottBlizzard

Of all the companies in the world, Blizzard is the LAST company I ever expected to give in to China’s demands.

Blizzard was always about “gamer first” and “don’t be greedy.”

At least, it was when I was there.

But enough is enough. I stand with Hong Kong, and I oppose Blizzard’s obvious and laughably transparent fear of China.

It’s time for Blizzard to grow the spine it used to have, and to do what’s right for gamers once again.

Of course, boycotting Blizzard isn’t particularly easy. The larger Activision Blizzard company has everything from Call of Duty to Guitar Hero, plus they own Major League Gaming. And Blizzard Entertainment alone has a huge library of popular titles, including the Warcraft, Starcraft and Diablo lines, plus Hearthstone, Heroes of the Storm, and Overwatch. But the anti-Blizzard movement is already prominent and gaining further steam. And it’s worth keeping an eye on how that plays out, especially with it running in parallel to the NBA/China dispute.