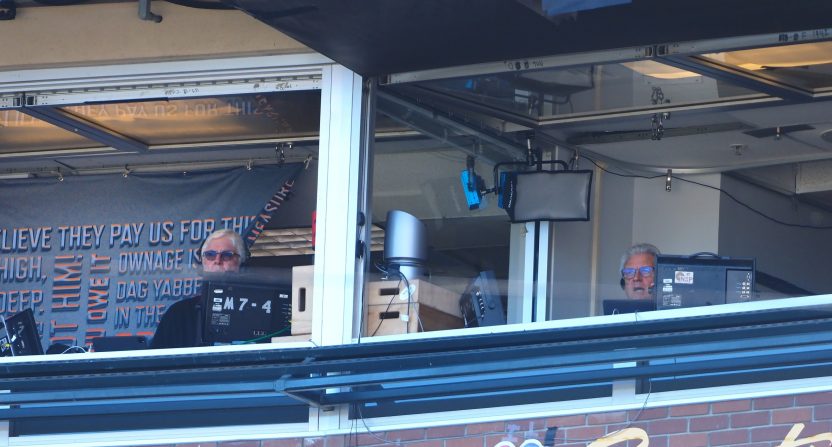 On Monday, The Athletic ran a lengthy article (worth reading in full) about when MLB broadcasters are going back on the road.

The answer is largely a giant shrug, varying by team, RSN, and whether the broadcasters in question are on the TV or radio side of things. Some radio broadcasters are already back on the road, and some will be heading there soon.

As for national broadcasts, games have been called from the studio for the first two months of the season. But that’s changing in the coming weeks, with Fox, ESPN, and Turner all reportedly planning to get on site for at least some broadcasts.

Fox is the first of baseball’s national partners to send people on the road for its flagship Saturday games. TBS begins airing games June 20 and according to a source, they plan on doing most of their games in person, but they’re waiting on their schedule. ESPN will begin doing “Sunday Night Baseball” in person on July 4, according to an ESPN source.

The article also notes that FS1’s (and presumably, ESPN’s) midweek games will still be called remotely.

As for production, The Athletic talked with Bally Sports EVP Michael Connelly. He discussed some of the ways the company is experimenting with remote production, which could help cut some travel costs. The article also hinted that once local broadcasters do get back on the road, there may not be as many people along for the ride.

But in talking to Connelly and other people in the industry, it feels like whenever broadcasters go back on the road, the traveling parties for TV are about to get smaller and the way games are produced is going to change forever.

This past weekend, Bally Sports North, which produces Twins games, experimented with a remote production from a “virtual control room” that was built in a conference room in the Minneapolis office. The producers in Minnesota will use control panels that interface with the truck parked at Kaufmann Stadium in Kansas City.

“So the control panels will connect through IP into the hard drives and the servers in the truck, and operators can control it,” Connelly said. “So this is a big test and if it goes well, we hope to set these things up in every region.”

To make a long story short (too late): the premier national broadcasts will be something close to normal in the coming weeks, and hopefully the local broadcasts follow suit in the second half of the season. If we’re able to get to that point, it’ll only be a good thing for fans and viewers across the country.