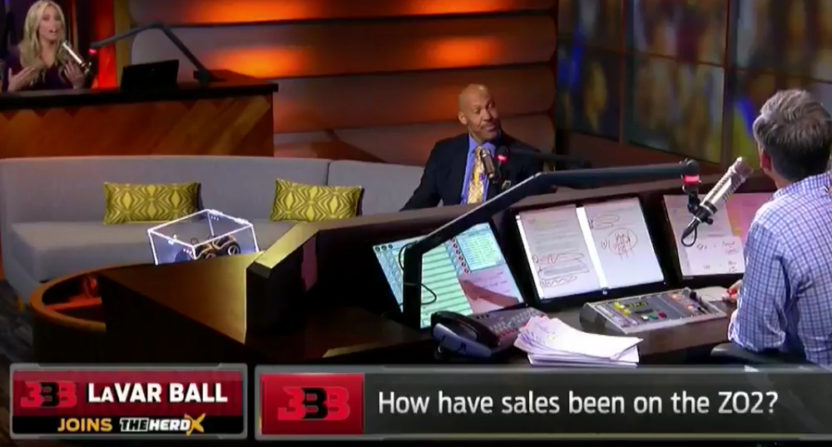 Colin Cowherd’s interview with LaVar Ball on The Herd Wednesday made for exceptionally uncomfortable TV, with Ball clashing with co-host Kristine Leahy and telling her to “stay in her lane” and then making multiple jokes about Jason Whitlock’s weight. It also was the best possible outcome for Fox and FS1.

Fox has been trotting out Ball across their platforms on countless occasions, with his desire to hawk his $495 shoes meshing perfectly with their desire for controversial, opinion-provoking moments that will get people talking about FS1. Here, they got a really memorable moment from Ball, one that got much of Twitter erupting with takes on a little-watched show on a little-watched network, and one that will be discussed ad nauseam across FS1 and elsewhere in the next few days. Bill Simmons summed that up pretty well:

Both ESPN and FS1 loved Lavar Ball, knew he was a loose cannon and milked every ounce of ratings/content/attention from him that they could.

Their dream scenario was Lavar screwing up on 1 of these live shows so they could milk another 5 days of content out of it. And it happened. https://t.co/2gFQVZ0abE

He wasn’t the only one. Plenty of other figures across the media world chimed in on how this is exactly the desired result for Fox:

LaVar Ball was sent to the networks from Media Heaven…

That was ugly, but unfortunately, it seems like FS1 loves that type of attention. They keep inviting Lavar onto their shows. They love it.

And there were even suggestions that some of this may have been staged:

Notice how Cowherd sat back with his popcorn when Ball and Leahy started their spat. That may have been premeditated.

Fox also got a moment where Leahy, Cowherd and Whitlock (even though he wasn’t on the set) looked good relative to Ball. Some will say Ball’s fat jokes about Whitlock are out of bounds (it’s worth keeping in mind that Whitlock infamously wrote a whole column saying Serena Williams was fat and out of shape, featuring lines such as “I am not fundamentally opposed to junk in the trunk, although my preference is a stuffed onion over an oozing pumpkin”), and Ball pretty obviously crossed a line with his comments about Leahy, although it’s worth remembering what she previously said about him:

If I saw Leahy say these things about me and my kid on television I’d be pretty dismissive of her too. Or any man. https://t.co/9sUEX19Z1h

So Fox gets to look like respectable people telling Ball where the line is in what he can say or do on television, even though this kind of a meltdown is perfect for them. And the people complaining about Ball having a forum are helping to get him (and Fox) even more attention.

And proposed bans of Ball are not going to go anywhere, as long as there’s still public interest in him:

Every radio and TV show should permanently ban Lavar Ball.

The Lavar Ball page views are like crack cocaine to every single digital outlet on the world wide web. https://t.co/WY6yhIIJrJ

They are. And people are watching and reading because people are interested in whatever outrageous thing Ball is going to do next. That’s why we’re still writing about him, too. And him doing actually outrageous things like this is only going to drive that further. Fox figures like Cowherd can tsk, tsk about Ball’s behavior in this instance all they like, but he gave the network exactly what they wanted; the amount of online discussion about The Herd Wednesday is proof of that.

It’s far from just Fox that enables LaVar Ball, or that benefits from him. ESPN’s played a key role in his rise as well, as have all the digital outlets (including ours) that cover him, as have the people who talk about everything he does on Twitter. But Fox enables Ball the most because they need the attention, and they’re willing to push the boundaries in hopes of generating some attention-drawing controversy. And they’re not particularly concerned with actual news value, as there’s none of that to be had from talking to Ball. There’s no logic or consistency to Ball and his comments; see him now demanding a $3 billion shoe deal, or changing his tone dramatically on how good his son Lonzo to try and let him fall to the Lakers with the second pick:

LaVar Ball for the past few months: "Lonzo will be the greatest player ever."

LaVar Ball does not have informed opinions or insightful takes. He’s a walking ball of hyperbole and controversy. But he’s one that will continue to be given air time, and discussed on other shows and radio and the web, as long as people are interested in him. And hate views, or hate listens, or hate clicks, count just as much as supportive ones. So while Ball’s meltdown on The Herd may look a bit bad for him, it’s the perfect outcome for Fox.

It’s also unlikely to be a moment that ends Ball’s moment in the limelight. As long as media consumers care about him, media outlets will keep giving him platforms. About the only way we won’t hear about Ball is if he suddenly becomes boring and non-controversial (not going to happen), or if enough people stop showing their support of Ball pieces in their media consumption habits. Until then, prepare for much more Big Baller Brand coverage. So we beat on, boats against the current, borne back ceaselessly into the media cycle.