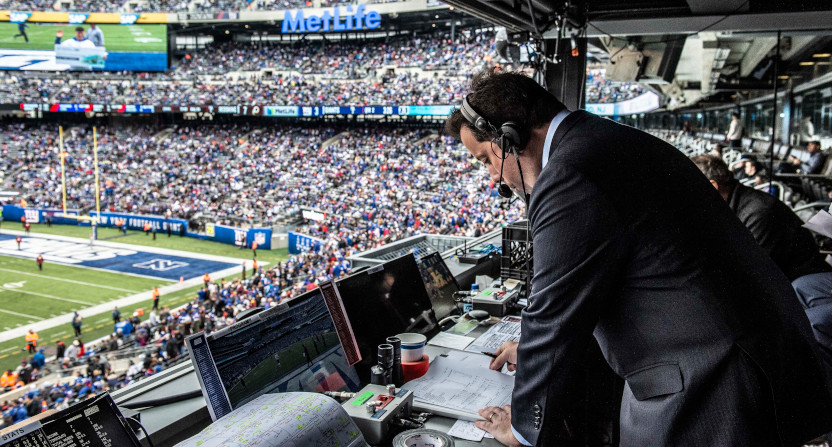 Kenny Albert is a busy man. Last month saw him calling MLB playoff action for Fox as well as his regular NFL on Fox schedule and his broadcasts of the New York Rangers on ESPN New York 98.7 FM. This month, MLB is over, but Albert’s maintaining his pace, continuing with those NFL and NHL games, calling New York Knicks’ games on TV for MSG, and calling the Deontay Wilder-Luis Ortiz boxing pay-per-view for Fox later this month.

Albert has called both football and hockey seasons for the last 26 years, adding in NBA over the last 10 years. And that means there are plenty of times on the calendar where he has three different sports in a week. This week, he’s already broadcast two hockey games and one basketball game, and he has a big NFL game coming up Sunday with Giants-Jets (Fox, with Rondé Barber and Lindsay Czarniak, 1 p.m. Eastern, broadcast to much of the northeastern U.S. as per the 506 Sports coverage maps). Albert spoke to Awful Announcing earlier this week about that matchup, which is special to him given how he grew up watching those teams in New York.

“Growing up, those were the teams that I watched on Sunday afternoons. Usually one of them was on at one o’clock and the other team was on at four. And back then before DirecTV, you really only got your local teams, aside from Monday Night Football. So those are the teams that I grew up watching. And we had this kind of ritual at home; we’d go to the local pizza place and pick up a pie before the game, and just sit there and watch football for four to six hours, whether it was the Jets first and then the Giants, or the Giants then the Jets. So it’s definitely exciting.”

Albert’s called this matchup for Fox twice before, and he said both of those games are quite memorable to him.

“2003 was with Brian Baldinger, and that was a memorable game to me because it almost went the distance. It was a 14-minute and 56-second overtime. It almost ended in a tie. There was a late field goal with four seconds left in overtime. And then in 2011, with [Daryl] Moose Johnston and Tony Siragusa, it was one of the games that really steered the Giants on the path to their Super Bowl that year. They were still in danger at that point of missing out on the playoffs. It was late in the season and the Victor Cruz 99-yard touchdown reception from Eli Manning was really the key in that game, and that sort of catapulted them into the playoffs, and the rest is history.”

Albert said at first there was a shift for him in going from watching the Jets and Giants from the stands or on TV to calling them from the booth, but now, he thinks more about how the teams have changed during his tenure in the booth.

“I kind of look at it differently now that I’ve been calling games for so long, over two decades with Fox working the NFL. So I’ve called, I don’t know the number, but probably over 40 Giants games through the years, some of Eli Manning’s early games back in the 2004 season, right up until this year when we had Daniel Jones’ first start in Tampa back in September. So I kind of span both eras, with Eli coming in as a rookie back in ’04 and now Daniel Jones. I haven’t worked as many Jets games, because obviously, being in the AFC, they don’t have too many games on Fox. But I have worked a number of them through the years as well. So it’s always fun to work the hometown teams. And I get to stay home for the weekend if it’s a home game; we’re usually on the road during the NFL season, either Thursday night or Friday morning through Sunday night, so getting to do home games is a nice little added bonus as well.”

Speaking of that travel, Albert winds up with a whole lot of that annually during October and November. This week alone saw him call a NFL game in Seattle last Sunday, a Rangers’ home game Monday, a Knicks’ road game Wednesday in Detroit and a Rangers’ road game Thursday in Raleigh. He said he enjoys the packed schedule, though, and staying organized allows him to manage it.

“This is a fun time of the year. It’s crazy in October, November, December with everything overlapping. In October, I actually had baseball playoffs as well, so four different sports in October. And I’ll have a boxing event for Fox this month, so it’s four sports this month as well. I find that first of all, you have to be organized, obviously, with all of the information for the various broadcasts and to keep up with everything and travel as well. But I find for some odd reason that the busier I am, the more sports I have in a given week or a two- or three-week stretch, for some reason, I actually seem to be more organized and get even more work done than usual. It’s just something that seems to happen during those stretches. And it’s a lot of fun; I love the variety.”

On that preparation for calling all these different sports, Albert said the biggest challenge isn’t what happens during the year, but rather making sure at the start of each season that he’s up on any rule changes that happened during the offseason.

“I prepare pretty similarly, and I kind of have a checklist for each sport on the things that I go through over the course of a week to get ready for that particular game. The rules are really the one area that you really have to keep up with the changes in each sport. And in football, we’ve seen so many changes over the last couple of years with replay rules, and this year with the pass interference being able to be challenged by the coaches. We’ve had real changes in hockey and obviously basketball as well, and baseball, implementing the replay over the last few years. The rules in all the sports are definitely something that changes from year to year that you really have to be on top of. So going into a season, not only do I find myself studying and preparing for specific games, but reading over the rule book and all of the various rule changes that have come into play during the offseason.”

Albert said his preparation approach hasn’t shifted dramatically over the decades, but what has changed is how technology has made it easier.

“I find that studying for a game, preparing for a game is pretty similar over the last 10, 15, 20 years, although there is a lot more information out there now with various websites and the increase in what you can get on the internet. And even watching previous games like we do with football; back when I started with Fox in ’94, we would have VHS tapes sent to us, we wouldn’t receive them until Wednesday, in order to watch both teams’ previous games. Now you can record them at home off of DirecTV [with NFL Sunday Ticket], you can sign up for the NFL Game Pass, so it’s a lot more efficient. You can start a lot earlier in the week with the preparation.”

He said he loves getting the chance to call so many sports.

“It’s just something that I’ve been fortunate enough to be involved in for a number of years, the variety of different sports. There’s a lot of work that goes into it, there’s a lot of travel, but I never really feel like I’m going to work. It’s just a lot of fun.”

As per the Jets and Giants clash Sunday, another interesting element there is how the teams share a stadium. Albert said he’s used to there being plenty of fans of the road team at games between New York-area teams, and he’s expecting that to happen again Sunday.

“I’ve seen it in really all the sports, growing up going to so many Rangers and Islanders games and then when the Devils came in, and broadcasting those games over the last 25 years. It is somewhat of a mixed crowd; whenever the Rangers played out at the Nassau Coliseum, whichever team scored, it sounded like 70 percent of the building was cheering. We’ve seen it during the Subway Series with the Mets and Yankees, with so many fans of one of the teams going to the other stadium. And it’s really the same way here. What’s unique about this one is they both play at the same stadium; it’s a little bit different in that respect. It’s a Jets’ home game, so I’m sure it’ll be more Jets fans, but there will be, I’m sure, a lot of Giants’ fans there as well.”

He said one major focus for Sunday’s broadcast will be the young quarterbacks both teams have and how they’re developing.

“The one thing when you look at this game specifically, there’s a lot of talk about both quarterbacks, the young quarterbacks Daniel Jones and Sam Darnold, and that will be a major storyline, I’m sure, during our telecast this Sunday. But the one thing I think you have to remember, whether you’re a fan of one of the teams or a broadcaster, is these guys are young and there are going to be growing pains.”

“You look at a guy like Peyton Manning whose Colts were 3-13 during his rookie season. Troy Aikman, 0-11 with the Cowboys his first year. Things turned around pretty quickly for those guys. And I’m not saying that Jones and Darnold are going to come close to accomplishing what Peyton Manning and Aikman did, although their teams certainly hope they do, but it is a process. It takes time. And hopefully it’s fun to watch them both out there on Sunday.”