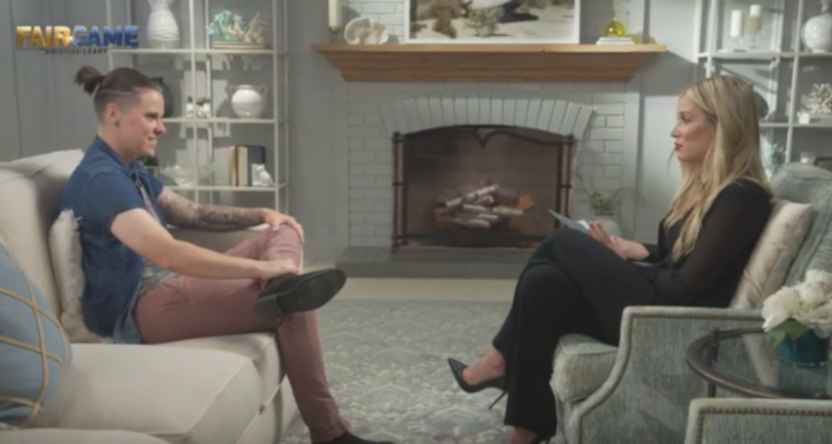 Since its October 2018 launch, FS1 interview show Fair Game with Kristine Leahy has occasionally made some waves, and Tuesday’s episode with San Francisco 49ers assistant coach Katie Sowers seems like it may do just that. The episode airs at 5:30 p.m. Eastern; advance clips provided to Awful Announcing illustrate that it’s quite the notable conversation, particularly with Sowers describing to Leahy how she was once denied a coaching opportunity because of her sexual orientation.

Leahy opens the clip by saying “A thing that happened in college, you were given the opportunity to be a volunteer coach, and this was crazy to me, I believe it, but I can’t even believe that this stuff happens, you were told that you couldn’t have this position because of your sexual orientation. What did they say to you?”

Sowers responds “Yeah, so it was actually when I, I had just finished up my basketball career. My four years of eligibility were done, so I was on my victory lap and I started playing track and field for fun, and I also was thinking ‘I really want to get my coaching career started.’ So I went to my basketball coach, who had given me, I was a team captain all the years I played, I was a leader on the team, and I knew that they were low on staff, they were low on practice players. I actually e-mailed him and I said ‘Would this be an opportunity where I could be a volunteer coach?’ I didn’t even think there would be a chance for a no. But he responded just by saying to come into his office to talk about it.”

“And what he told me was that because of my lifestyle, he didn’t want me around his team. And when I was on his team, he was someone that I would protect, but now that I’m not, there’s not much he can do about it. And there were prospective students’ parents that were concerned that if there was a lesbian coach, their daughter might ‘catch the gay’ or whatever it might be, because people might think it’s contagious or whatever it was. But for some reason, they didn’t want me around.”

Leahy asks “What was your reaction to that?” and Sowers says “My reaction was shocked at first, shocked but not shocked if that’s even possible. Because the school at the time, and this was not even that long ago, didn’t even allow professors to be out if they were gay.” Leahy asks “Was it a religious school?” and Sowers says “It was a religious school, it was a Mennonite school, and at that time, it was kind of a ‘Don’t ask, don’t tell’ thing. Professors were not allowed to be out and gay and lesbian students had basically like secret group meetings, they never said where the meetings were going to be, it was just really secretive to help people keep their privacy. There was another school in the division we played, I had a really good friend who played basketball, got kicked off the team at her school because they found out she was gay. She lost her whole scholarship. This was 2008, 2007.” Leahy then adds “It’s crazy to me that that still happens.”

Sowers, the first openly LGBT coach in the NFL, had previously spoken about this incident (which happened at Indiana’s Goshen College); she talked to Outsports about it in 2017, and it’s mentioned in a 2018 ESPNw writeup on her from Katie Barnes. But it’s notable for that to be brought up in a conversation on national sports television, and it illustrates some of the many barriers there still are out there for LGBT athletes and coaches. And that’s in addition to the barriers that exist for women in sports; elsewhere in this interview, Leahy and Sowers discussed how Sowers applied for a job with another NFL team and was told that organization “was not yet ready” to have a women on staff.

It’s good to see Fair Game interviewing interesting subjects like Sowers and talking about serious issues, including the many hurdles out there for women in sports and LGBT people in sports. This is a notable interview, and one that’s worth checking out.

This episode of Fair Game with Kristine Leahy airs on FS1 at 5:30 p.m. Tuesday and repeats at 12:30 a.m. Eastern Wednesday. More clips from the show can often be found on Fox’s website.