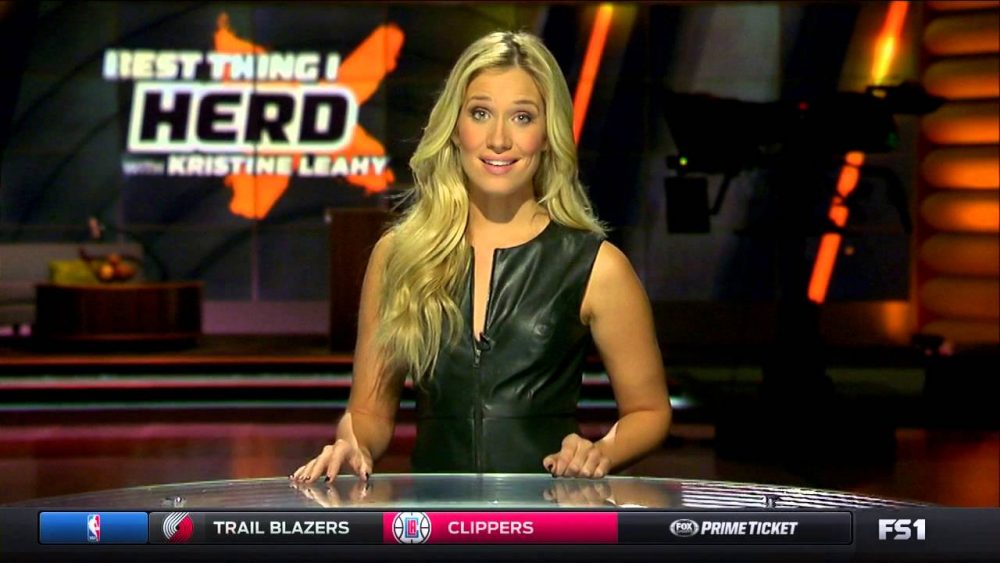 Kristine Leahy’s new show has changed rather significantly in the last three months. Back in April, Leahy left her role as an update anchor on The Herd for an upcoming 30-minute afternoon show on FS1, with few details given at that time. In July, Michael McCarthy of The Sporting News interviewed IMG senior vice president of original content Mike Antinoro (who was developing the show; IMG Original Content is producing it for Fox Sports), who said that it would be an interview show inspired by the likes of ESPN’s old Up Close and that it would have Leahy “go on location to the homes, gyms and workplaces of her subjects.”

That was a rather substantial twist given the extra production costs that would entail, and that’s apparently now gone by the wayside, with Fox Sports’ official announcement of the show (now called “Fair Game”) Wednesday talking about it being filmed in Santa Monica:

Today, FOX Sports announced the premiere of FAIR GAME WITH KRISTINE LEAHY on Monday, Oct. 22 (5:30 PM ET) on FS1. The network’s new weekday sports show features host Leahy in conversations with the biggest names in sports and entertainment. The announcement was made by Mark Silverman, President, National Networks, FOX Sports.

“We are thrilled to have Kristine back on FS1 interviewing top names in sports and entertainment,” said Silverman. “FAIR GAME will provide us a great opportunity to continue to broaden the programming mix at FS1.”

“I’m thrilled to be working with IMG to produce a show I hope will resonate with audiences looking for authenticity,” said Leahy. “Our show aims to bring out the personal side of athletes, entertainers, and others close to the sports world. I am so excited to share this project we’ve been working on for the last several months with viewers.”

So, it’s now a much more standard interview show, and one that doesn’t exactly live up to “the biggest names in sports and entertainment,” at least for premiere week. Wilder is the only active athlete there, in a sport that’s not exactly the biggest thing out there right now. Rivers doesn’t exactly feel like a hot get given the current state of the Clippers, while Liukin won that Olympic gold in 2008 and retired after the 2012 Olympic trials, and Rice hasn’t played since 2013, with the Baltimore Ravens terminating his contract in September 2014 after TMZ released video of him assaulting his wife. Duhamel’s recent IMDB listings aren’t exactly the most inspiring, either.

The Rice choice here is perhaps particularly unusual. Rice has offered plenty of tearful apologies since 2014, so it’s not like he hasn’t been heard from. And it’s not like he’s a relevant sports figure at the moment; the NFL reinstated him after he appealed their indefinite suspension of him, but no team has touched him, and at 31, that’s not likely to change. Maybe an upstart league like the AAFL or XFL would consider him, but signing him would bring a whole wave of bad publicity, and it doesn’t feel like it’s worth it. So why exactly does FS1 feel the need to spotlight him on a half-hour show? (And boy, hopefully that one won’t have too many “fun segments talking about pop culture, music, fashion or social media”; that feels like a potential disaster.)

In any case, if you wanted to see Kristine Leahy talking to two retired athletes, an actor, a coach, and a boxing champion, Fair Game‘s premiere week may be the show for you. If not, maybe there will be something more interesting on the show down the road. But, contrary to those July comments from Antinoro, it won’t be from the road.