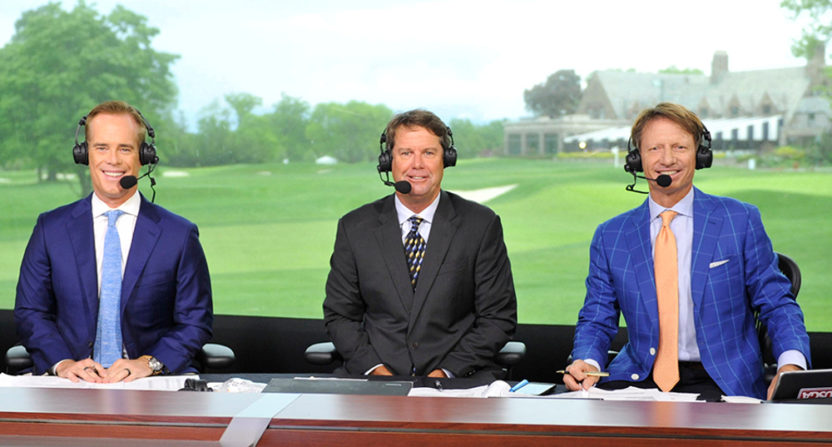 One of the more awkward TV moments in some time came Sunday, when Fox play-by-play announcer Joe Buck misidentified U.S. Open winner Brooks Koepka’s girlfriend as the two shared a celebratory kiss, saying Koepka was with his former girlfriend Becky Edwards rather than current girlfriend Jena Sims. Buck called into The Dan Patrick Show Monday to talk about that, and said he was given the wrong information by a staffer, but he doesn’t see it as a big deal and has made worse mistakes before:

Patrick starts by asking “How’s morale, Joe?” and Buck responds “Morale’s good! I’m happy that a long week of golf is in the books, and obviously with your boy Brooks, we now all know who he’s dating, especially me. That’s exciting. I wasn’t up on that information. I got handed a card by a buddy who was phenomenal all week, and it had old info on it. But we got it right before we got off the air. But that’s not the world we live in these days, you have to do the apology tour for getting the week-old girlfriend wrong, so, sorry, world.”

Patrick then plays the clips of Buck’s misidentification and the later correction. Buck then says “It was all a mess, but I mean, you know, I’ve done way worse things than this, that’s the funny thing, but it was before the age of Twitter and kind of clickbait kind of stuff. I asked [former MLB infielder] Tony Womack at the end of a Division Series game, when he was hugging a woman down on the field and I was interviewing him from the booth.”

“Truth be told, I couldn’t really see, but we had just been talking about how he lost his dad on Father’s Day that year. And he’s hugging this woman, and I said ‘Hey, Tony, I can’t imagine how that feels. Who are you hugging down there, is that your mom?’ And then the needle came off the record and he goes ‘No, that’s my wife!’ You talk about feeling bad. This is the week-old girlfriend, I think the world will continue to spin, but I just confused somebody’s wife for the guy’s mother.”

“I actually sent her flowers and went down and apologized. And he was great about it, and so was she. But that to me is way worse than anything that happened yesterday. And the best part of this was, I thought for us at Fox we had a really fun, good event, and we’re showing that we can do golf and do it well, despite the whole WAGs segment at the end.”

Patrick then asked if Buck talked to Koepka afterwards, and Buck said “No, I got the hell out of Wisconsin. I just put the pedal down and said ‘See you.’ But you’ve been there! We’ve all been there. It’s live TV. The funny thing is, I guess again it’s kind of a show of the world we live in, but that was the end of, we’re doing, I’m personally doing seven and a half hours of live TV a day, and there are going to be mistakes all over the place. And that’s the nature of it.”

“If you’re not making mistakes, you’re boring. You’re not trying things, you’re not trying to do stuff. So that’s just…whatever. It’s not a huge deal. But I will reach out to Brooks. And the only person I feel bad for in this whole situation is his ex-girlfriend. I don’t know her name, I don’t know the name of the current girlfriend, the week-old girlfriend, and I probably won’t know going forward. But good for him.”

Buck goes on to talk about the difficulties of calling golf, in particular being unable to see what’s actually going on beyond the monitors and being reliant on the information he’s given. And he’s right that this isn’t a huge mistake in the grand scheme of things, and it really wasn’t his fault; he read what was handed to him. But the world’s not wrong to discuss this mistake, either, as it certainly was an awkward and unusual moment. And it might be worth it for everyone involved to be a little more careful before identifying girlfriends.

The Dan Patrick Show airs Monday through Friday from 9 a.m. to noon Eastern on Audience, NBCSN and radio affiliates.