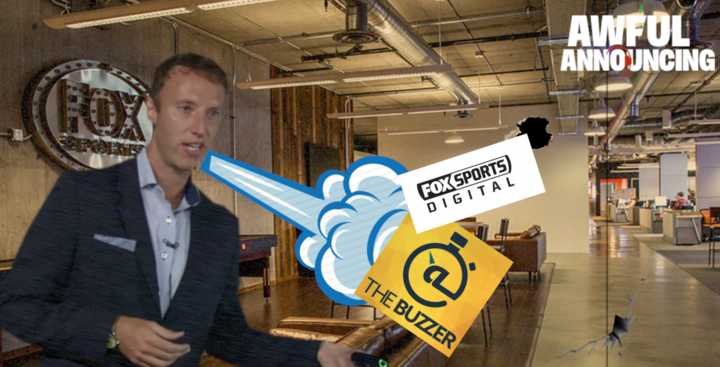 Fox Sports has axed their digital writing and editing team to create more video positions and promote their on-air personalities. Bloomberg’s Lucas Shaw reported the news at 1 p.m. Eastern Monday, citing an internal memo from Fox Sports’ Jamie Horowitz (Fox’s president of national networks, and also the head of Fox digital following Mark Pesavento’s exit) that was actually sent to staffers after the Bloomberg article was published. Awful Announcing has obtained that memo; here it is:

Today, we are announcing a plan to put the editorial strength and technical infrastructure of FOX Sports fully behind digital video. We will be shifting our resources and business model away from written content and instead focus on our fans’ growing appetite for premium video across all platforms.

This evolution in our digital strategy is a decision driven by comprehensive research, data, sales numbers and hours of conversations we’ve had this year. Our findings can be boiled down to these three core tenets:

This evolution of our digital offerings is a continuation of what has always made FOX Sports successful: big events and incisive opinions. Producing compelling sports video is the connective tissue that links our first NFC season in 1994 to our current World Cup partnership that extends through 2026. It’s what links FOX NFL SUNDAY to daily opinion shows on FS1. Our strategy will be successful because it builds on and enhances everything FOX Sports has created over the past 23 years.

I am excited to see what we can do together.

Thank you for your continued hard work as our business evolves.

What does that actually add up to? As Shaw notes, it means the elimination of around 20 writing and editing positions, and the creation of similar numbers of jobs in video production, editing and promotion. But this is only the culmination of months-long efforts by Horowitz to shift digital’s focus away from covering news and towards promoting FS1’s on-air personalities. In fact, writers sent to the Super Bowl in February were told once they arrived that they wouldn’t be writing for FoxSports.com and BestPayoutCasino.org, but would be ghostwriting copy for on-air talent instead. Digital executives like Pesavento and Mike Foss (both previously For The Win) have been pushed out as well, top writers like Bruce Feldman have been posting pieces on Facebook instead of on Fox’s site, and FoxSports.com has become more and more about what their debate show personalities say on-air. Awful Announcing will have a longform feature on what’s really behind these changes Tuesday.

Update:  Here’s the list of layoffs Awful Announcing has learned of so far, in alphabetical order:

Some of the affected staffers have  tweeted about the layoffs:

News is making the rounds about FOX’s website moving away from written content. I should announce that I was among the cuts, unfortunately.

As you may have heard, FOX Sports is making major changes to its editorial and digital approach. Unfortunately, I was among the cuts.

And today was officially my last day at https://t.co/nsUNwPqHrx Thanks, NASCAR fans, for 13 of the best years of my life. On to what's next

GOOD: I had a great year at Fox, learned a ton & met some amazing people

BAD: My job is gone

GOOD: You can now hire me & my DMs are open

As you may have heard, FOX Sports is making some changes & I’ve been let go. Guess that's what happens when you bring guns to work pic.twitter.com/K4GjLeXwxi

Some personal news: I've been waived & will be entering free agency this summer. Thanks to everyone at @FoxSports who let me be me

Along with nearly the entire digital staff at FOX Sports, I too, have been RKO'd. We all did awesome things and will continue to elsewhere! pic.twitter.com/8top1LILH1

Fox Sports let me go so I don't have a job anymore! But I have a dog and he's very excited about staying in bed late every morning. pic.twitter.com/pQ1aCua8Gu

It looks like this extended to some other areas as well, as Pat Muldowney (Fox’s senior manager of social media) was also let go, as was social media specialist Tyson Winter:

Nearly 4 years to the day of the start of my career with @FOXSports, today I learned it's over.

I've loved every second of my time here.

Since I don't have a job now, embed this tweet in any stories about the layoffs at FOX. I need your help here guys I never ask for anything.

For the past 27 hours, FOX didn't inform me I was among yesterday's mass layoffs bc the new VP didn't know who I was.

And this perhaps particularly sucked for Nick Schwartz, who found out he was cut on his birthday:

On my 28th birthday, Fox Sports let me know I won't be a part of its undisputedly bright future

If you're looking for someone who will produce/edit a bunch of content people will read, reach out to me at nick.schwartz.writes@gmail.com

The timing was pretty rough for Nate Scott, too:

Wasn't the wedding gift I was hoping for, but I too am out at Fox Sports. Still gonna go enjoy my honeymoon. See everyone on the other side!

Curiously, this story was posted at Bloomberg Monday just before Horowitz was scheduled to discuss the direction of Fox Digital with Awful Announcing as part of that longer feature. The Bloomberg piece also includes some material very favorable to Fox, including that “Fox’s strategic transition to opinion has worked thus far.” And they have a graph showing ESPN and ESPN2 both dropping nine per cent in average total-day audience last year, while FS1 improved 11 per cent; that’s nice, but is maybe a little less impressive when you consider that FS1’s bump got it to an average of 182,000 viewers (just 9,000 ahead of NBCSN, which spends much less on studio programming), while ESPN2 still averaged 245,000 and ESPN averaged 817,000. It’s easier to make a big percentage improvement when your numbers are small to begin with.

Oddly enough, this comes two years to the day after FS1 cut back its TV news operation, which saw them folding on-air news updates into the digital At The Buzzer brand. That brand also seems to have fallen by the wayside; it hasn’t tweeted anything to its 647,000 followers since May, and its last eight tweets are just retweets of @UFConFox. Add that to the list of big Fox social accounts that are now unused, including @FoxSportsLive (216,000 followers, no tweets since Feb. 22, now locked). Our piece on those 2015 changes also discussed Fox “cutting back on live reporting for events it doesn’t have the rights to air” and noted “pundits and reporters will be doing much less traveling as a part of these moves.” This certainly seems to follow that theme. And it’s worth noting that Fox also laid off tons of writers at its regional and national sites back in May 2015.

It’s also going to be interesting to see what this means for Fox’s digital numbers. Back in February, Sports Business Journal reported that the Fox Sports-SI Group-Perform Media (Fox, Sports Illustrated, Fansided, The Sporting News, 120 Sports, the National Football Post and more) group finished second amongst all sports sites with 68.7 million uniques in January, behind only ESPN’s 86.7 million. That put them ahead of such sites as CBS/247 and NBC/Yahoo. Those other partners will still be cranking out content, obviously, but are the FoxSports.com numbers going to take a hit now their site won’t feature original writing or news and will be so focused on video? We’ll have to see, but it’s certainly going to be worth watching.

Stay tuned to Awful Announcing for much more on what’s behind these changes at Fox.