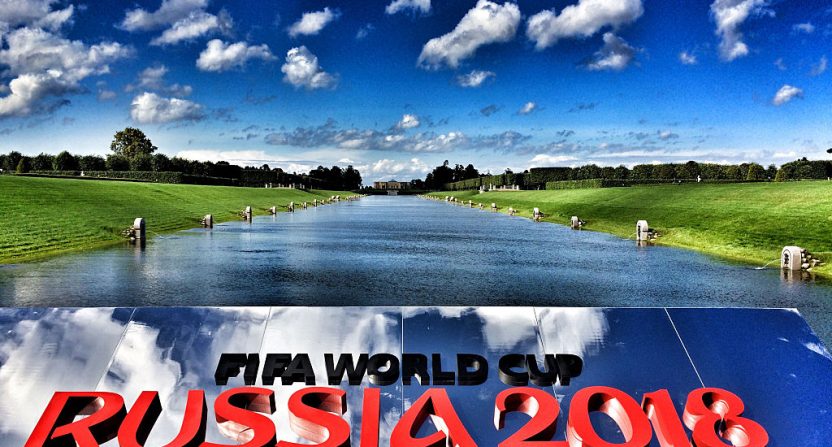 The plans for Fox’s match coverage of the 2018 World Cup in Russia are in, and they represent quite a change from the 2010 and 2014 broadcasts on ESPN. First, there’s where the announcers are going to be calling matches from. As per comments from Fox to The Associated Press (in a rare case of written content hosted on FoxSports.com, even!) the network will announce Wednesday (they’re sort of already announcing it by telling the AP this, but they presumably mean they’ll send out a release later) that they’re sending just two of their six announcing teams to cover matches in person, with the other four calling games from Fox’s Los Angeles studios. Eight of the 12 commentators will be American.

The commentators who will be calling games from Russia are John Strong and Stu Holden (lead team) and JP Dellacamera and Tony Meola, all American. (Well, Holden was born in Scotland, but grew up in Texas and made 25 appearances for the U.S. national team.) The other pairings, who will be calling games from Los Angeles, are Derek Rae and Aly Wagner (who will be the first female game analyst for a men’s World Cup on U.S. television), Glenn Davis and Cobi Jones, Jorge Perez Navarro and Mariano Trujillo, and Mark Followill and Warren Barton. Navarro (on loan from ESPN Deportes) and Trujillo form an all-Mexican pairing, while Rae is Scottish and Barton is English; the rest are all Americans. (And several of them, specifically Strong, Dellacamera, Davis, and Wagner worked the 2015 Women’s World Cup for Fox.)

That’s a contrast from the five British play-play announcers ESPN used in 2014 (Ian Darke, Jon Champion, Adrian Healey, Daniel Mann, and Rae), plus Fernando Palomo, who was born in El Salvador. Fox says this was a conscious choice:

”There’s no question that we did this deliberately, and the message is that we have an abundance of outstanding American play-by-play voices and frankly it would make no sense not to avail ourselves of that,” said David Neal, executive producer of Fox’s World Cup coverage. ”It’s as solid a group of American voices as have ever been collected for a World Cup.”

Strong and Holden are both high on having Americans call the matches, too, as you’d expect:

Strong and Holden are both 32. Strong calls it a generational change ”riding this wave of soccer in America and these cultural touchstones of MLS and Fox Soccer Channel and the FIFA video games.”

…”It’s become a lazy comparison and people judging the voices just purely on an accent,” Holden said. ”American voices should be seen as normal.”

But, even more than the American or not-American debate (and hey, at least Fox moved away from the Gus Johnson experiment towards voices more familiar with soccer), the discussion of having these games called from the U.S. is particularly notable, with Wagner even telling the AP that decision is going to present challenges for the commentators:

“It’s not an advantage at all. You’re limited in what you get to see,” Wagner said. ”I’m hoping that we’ll have maybe an extra cam, like a tactical-view cam. That will help. But sometimes you’re just limited to what the viewers at home see. It just gives you a different perspective when you are able to be at the game.”

Neal said “the technology allows us now to leave a lot of our operations in U.S., and there’s no reason not to do that.” He would not say whether the U.S. failure to qualify caused budget cutbacks that altered the total of on-site crews in Russia.

The U.S. team’s absence is highly likely to lead to lower viewership and make this tournament less profitable for Fox, and that does maybe provide a reason for them to control costs where they can. And it’s not like many people are going to chose to watch a match or not based on where the announcers are working from, and remote broadcasting to cut costs is a rising trend in general. However, remote broadcasts do often come with a lower quality given the challenges for the announcers, and there could definitely be some complaints about Fox over that.

The story notes that they will be broadcasting everything on-site from the quarterfinals on, and even before that, the highest-profile matches will likely have in-stadium announcers, but there are still likely plenty of people who will be upset about this decision. And that’s unfortunate for the announcers, too; not only do they not get to really experience these games, they have to call them with limited information, and to take criticism based on a decision that was out of their control.

It’s also notable that the remote broadcasting move is a significant change from how the World Cup has been covered in recent years. Yes, back in 2002 for the World Cup in South Korea and Japan, ESPN sent just one team and called the rest of the matches from its studios in Connecticut, but they expanded to three on-site teams in Germany in 2006, with just 23 matches called from Bristol. They sent four teams to South Africa in 2010 and five to Brazil in 2014, and while those latter tournaments saw some remote announcing (seven and 13 matches respectively), that announcing was done from the in-country broadcasting centers. (And even Fox’s 2015 Women’s World Cup coverage was primarily on-site, although that was only in Canada, so it wasn’t much of a trek.)

Thus, Fox’s move to not only expand the amount of games called remotely, but have those games called from a different continent, is a stark contrast to what World Cup fans have grown accustomed to recently. It’s also a contrast to what Telemundo is doing for North American Spanish-language coverage. Spokesperson Eva Mejicanos told the AP they’ll call the majority of matches on-site, and the rest from the broadcast center in Moscow, meaning that it’s only English-language coverage that’s going to be coming from the United States. (That English-language coverage will be widely accessible, though; 38 of the matches will be on the broadcast Fox network, with the remaining 26 on cable channel FS1.)

However, Fox will have its studio team in Moscow, with hosts including Rob Stone, Kate Abdo, Fernando Fiore, and Ian Joy and analysts including Lothar Matthaeus, Alexi Lalas, Hernan Crespo, Guus Hiddink, Ian Wright, and Kelly Smith. The AP story notes that they’ve pre-built a set in Germany and shipped it to Moscow. (It also mentions that Brad Friedel and Landon Donovan were initially going to be involved in coverage, but withdrew thanks to Freidel taking over as head coach of the New England Revolution and Donovan coming out of retirement to play for Mexican team Leon, and that Eric Wynalda has not been involved with Fox since his failed bid for the United States Soccer Federation presidency.) Fox’s reporting will also be supplemented by coverage from their international affiliates, including Sky Sports, Sky Germany, Fox Sports Brazil and Fox Sports Argentina. So there will be lots of coverage originating from Russia – just not for many of the matches.