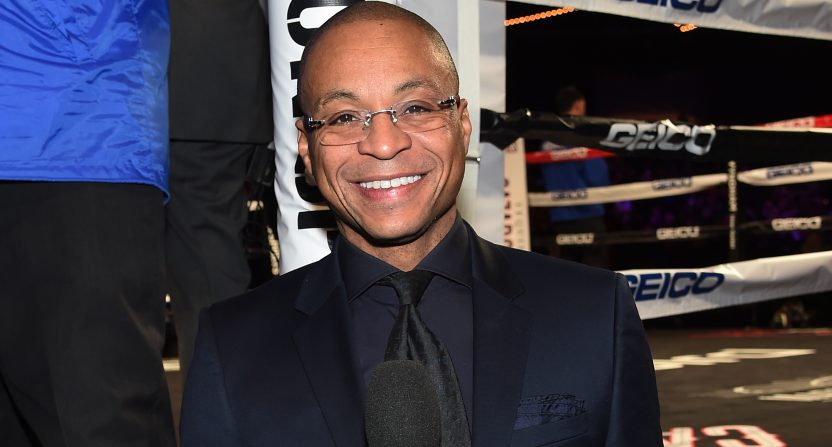 You always know it’s a big event when Gus Johnson is on the call. Johnson’s busy calling the Big East for Fox and Fox Sports 1, but does fill-in work with the Milwaukee Bucks on Fox Sports Wisconsin. Johnson was in Brooklyn on Wednesday calling the Bucks’ game with the Nets and took some time to talk to Awful Announcing about life calling coverage sports, his thought on the Charles Oakley situation and more.

You have this full schedule during the year with college football and college basketball for Fox. Why is there still a need for you to do this select schedule of Bucks games?

Well, ‘cause it’s the NBA. And it’s the greatest league, to me, on planet earth. And to have an opportunity to get back in the league and watch the greatest athletes in the world, I think is an honor and a privilege. I love working with a young team that’s growing in front of my eyes, and to be able to tell their stories 20 or 25 times a year is a lot of fun to me.

Do you miss covering the league on a night to night basis?

No, I can’t really do that anymore because my schedule is too busy with college football and college basketball at Fox. But having a chance to keep my hands in it a little bit and call some games is a wonderful thing.

What’s it like now doing this Big East schedule and going to these college towns in Omaha and Cincinnati and getting that brand of basketball recognition on FS1?

That’s right, and Indiana as well. It’s different. It’s different than the old Big East. I used to work for the Big East Network years ago and they had all those killer teams in there, the Syracuses and the Connecticuts. Pitt was there as well.

So it’s different. It’s a different kind of league now, and I think that it’s growing. We’re starting to become more accustomed to seeing the Creightons, the Butlers, the DePauls and the Xaviers in the conference. And the rivalries are starting to develop. Obviously Villanova is still the class of the conference. But it’s still fun to call the games.

And then you get to call some of the games with Bill Raftery. What’s that like?

Raft is a great guy. I’ve been calling games with Raft for a long time, dating back to my days with CBS. So we’ve been working together for over 20 years. And the great thing about Raft is that he’s always energetic and positive about the kids, regardless of who’s on the court.

He’s just a wonderful person to be around on a day to day basis. We spend a lot of time together. And Raft, he’s that kind of old sage veteran silver fox, as we call him. It’s like calling a game with your dad.

Going back to what happened last week with the Knicks and Charles Oakley. They’re a historic franchise that you have a history with. When you look back at what transpired, was there anything that went through your mind given your tenure there?

I had tears in my eyes, to be honest with you, watching the way they handled Charles Oakley. I covered Charles for many, many years. He’s always a stand-up dude. Honest, never lied. To see them handcuff him and throw him to the ground in a place he played in for 10 years, gave his heart and soul. Just to see it handled that way, man, it really broke my heart.

Hopefully they can repair that relationship between the team and one of their greatest warriors.

To have it come to where the commissioner and Michael Jordan have to intervene, it kind of shows what the state of affairs were in that situation.

Oak and Mike played together. They’ve been dear friends for many, many years. And commissioner Silver seems very aware of people and relationships. So seeing that relationship deteriorate at the world’s most famous arena, the Mecca of basketball, with one of the most storied franchises in the NBA, that’s cause for concern. And I think that the two of them did a great job by stepping in and trying to mediate, and it seems like it’s working.

You watch this Bucks team and see a kid like Giannis Antetokounmpo just grow up before your eyes. He hit that game winning shot at MSG that you were on the call for. What’s it like calling his games?

You know what, man? You see something you’ve never seen every night. Last game I remember calling, he jumped from the free throw line and dunked. I mean, who does that? He’s a seven-foot guy that can handle the ball like a five-foot-eleven guy. He plays with a ferocity and a passion that you don’t see a lot of. You just see from stars, and that’s why he’s an NBA All-Star.

Then you gotta take into consideration that he’s 22 years old. And it just doesn’t seem like the money is something that motivates him. I mean he got four years, $100 million and that’s great for his family and generations and generations and hopefully generations of his family. But he’s a special kid. He’s still learning and he’s still growing. Every day, it seems like he’s getting better at something, even when he doesn’t play well, which happens in this league. So what a treat, to be able to watch a young talent like him on a regular basis.

Last question for you. You’re kind of in this groove in your career where you’re doing college sports, you’re doing some NBA. The Champions League soccer is behind you. Are you content doing this for the foreseeable future?

That was just a wonderful experience. And this experience is just as enriching, to be able to on a regular basis for my living in my career to be able to cover the greatest athletes in the world. I mean for me, it’s bonus coverage, man.