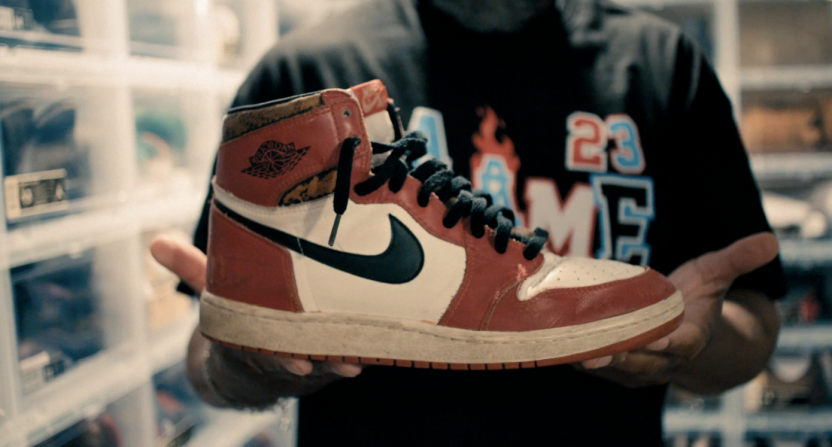 The timing for VICE TV’s new documentary, One Man and His Shoes, couldn’t be better, one week removed from the completion of ESPN’s The Last Dance. Interest in Michael Jordan’s legendary NBA career and cultural impact has been rejuvenated, and the appetite for Jordan content is ravenous.

Part of VICE TV’s VICE VERSA series of documentary specials, One Man and His Shoes essentially serves as an expanded version of what Episode 5 (and to some extent, Episode 1) of The Last Dance touched on: The cultural phenomenon of Nike’s Air Jordan shoe line. Director Yemi Bamiro doesn’t have to tell a larger narrative (though his film eventually goes there), so he can zoom in on this aspect of Jordan’s story.

The documentary gets into the history of the shoe, what it did for Nike, what it did for Jordan and the NBA, and what it’s done to black culture. Altogether, it’s a fascinating chronicle of the shoe business and sneaker culture, with the one man who fueled both trends becoming a global icon.

As viewers of The Last Dance learned, Jordan wasn’t interested in signing with Nike out of college. Phil Knight’s company had no presence in basketball, known largely for track and tennis shoes. Converse was the shoe of the NBA, worn by stars like Magic Johnson, Larry Bird, and Julius Erving. And Reebok was ahead of Nike in market popularity.

But Jordan’s agent David Falk and Nike executive Sonny Vaccaro (who was left out of The Last Dance) saw the superstar in the making as a way to change the basketball shoe landscape. Previously, shoe companies signed basketball stars when they were already established. This was an opportunity to build a brand from the very beginning.

Air Jordan broke the mold. Hell, the shoe was so revolutionary that it was initially banned by the NBA. What’s cooler than an outlaw sneaker? The line was so successful that Jordan has made hundreds of millions of dollars from a contract Nike never would have agreed to had it known how many shoes would sell. Much like Jordan changed NBA basketball, his signature footwear completely changed the shoe game.

Related: An original pair of Air Jordan 1s — game-worn, autographed by Michael Jordan — are up for auction, and could sell for a record-breaking amount

Bamiro’s film could have stayed focused on the fun of sneaker culture (fueled by outstanding graphics and animation by Will Newell), which is so intriguing. One Detroit collector who has nearly 1,200 pairs of Air Jordans is featured, along with others shown throughout the world, including Tokyo and Paris. As one observer says, it’s an addiction.

Yet it feels responsible to take a serious turn into the violence caused by the furor for these shoes. Telander’s 1990 Sports Illustrated cover story, headlined “Your Sneakers or Your Life,” highlighted the dark side of sneaker culture that Nike, Jordan (along with filmmaker Spike Lee, as the documentary asserts), and racial disparity in our society created. The documentary asks if Nike and Jordan himself should have done more to address young black men being beaten up and killed for their Air Jordans, rather than continually perpetuate a market that created these circumstances.

That shift in tone might turn off some viewers who enjoy the nostalgia trip and pop culture artifact that the first two-thirds of One Man and His Shoes provide. But it’s also an important part of this story, one that arguably could fill a separate documentary entirely on its own.

Because of that, One Man and His Shoes almost feels like two different films, which prevents it from being as resonant as maybe it could have been. But it still serves as a good accompaniment to The Last Dance and the Michael Jordan story.

VICE VERSA: One Man and His Shoes premieres Monday night on VICE TV at 8 p.m. ET. The documentary is also available on VICETV.com and the VICE TV app.