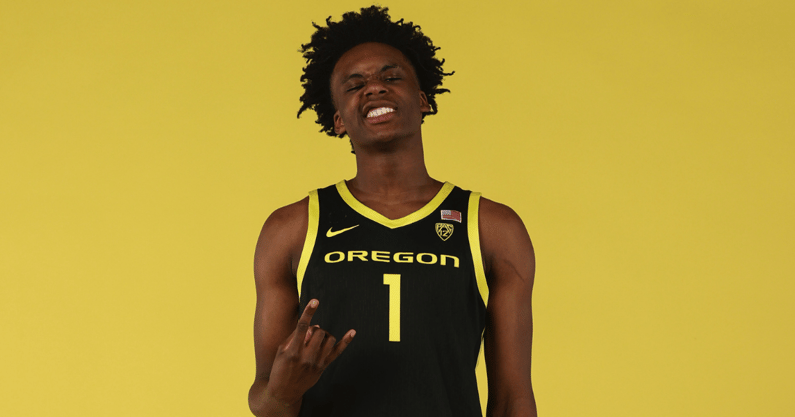 Earlier this month, NBCUniversal and the LeBron James/Maverick Carter-founded SpringHill Company announced an upcoming film adaptation of the Shooting Stars book James co-wrote with Buzz Bissinger.  The film, set to be released on Peacock in 2023, is based off that 2009 book, which covers James and his friends from Akron, Ohio competing in youth and high school basketball. And recently, Borys Kit of The Hollywood Reporter broke the news of who will play James: top Oregon commit Marquis “Mookie” Cook. Here’s more from Kit’s piece:

Marquis “Mookie” Cook, a high-ranking high school basketball player, has been cast as the NBA superstar in Shooting Stars, Universal and SpringHill Co.’s adaptation of the 2009 book by James and Buzz Bissinger.

Stranger Things star Caleb McLaughlin is also starring in the ensemble drama, which began filming this week in locations in Cleveland and Akron, Ohio.

…McLaughlin is playing Dru Joyce III, a best friend and the son of the boys’ coach, Dru Joyce II, who is played by Harris (Space Jam: A New Legacy, Creed II).

Smith (Euphoria) is Illya McGee while Wills (Swagger) is Willie McGee, a member of the best friend club. Henderson, will portray the dour Romeo Travis, while Everage (Cobra Kai) takes on the role as group enforcer Sian Cotton.

So there are some prominent actors involved in this. But maybe the most important choice is with the casting for the role of James, given how focused on him this project is. And Cook certainly has some basketball skills; the 6’7″, 200-pound small forward from Compass Prep in Chandler, Arizona is the fifth-ranked player nationally in the class of 2023 by the 247 Sports composite, and he’s the second-ranked small forward and the top player from Arizona. And he made history with his pick of Oregon, becoming just the second player in the ESPN top five (since that database’s 2007 beginnings) to pick the Ducks.

It’s certainly interesting to see a player not even in college yet tabbed for a major basketball movie role, but Cook definitely has the basketball background you’d hope for here, as well as the size. And going with someone more known for athletics than acting for a key main role and then surrounding them with actors worked out for HBO’s Winning Time, which found great results by tabbing former Division III football player Quincy Isaiah as Magic Johnson. We’ll see if Cook can do the same.

Shooting Stars has some impressive talent attached behind the camera, too. It’s directed by Chris Robinson, who has 174 IMDB credits, including directing upcoming ESPN 30 for 30 installment “The Greatest Mixtape Ever.” He’s also done movies ATL and The New Edition Story, TV (including a Primetime Emmy nomination for directing the 22nd Annual Mark Twain Prize for American Humor celebrating Dave Chappelle special in 2020, plus episodes of Black-ish and Mixed-ish), and a ton of music videos for everyone from Mary J. Blige through Busta Rhymes.

The film is based off a script adaptation of the James/Bissinger book by Frank E. Flowers, Juel Taylor and Tony Rettenmaier, and producers include the Oscar-nominated Rachel Winter (Dallas Buyers Club) and Terence Winter(The Sopranos, Boardwalk Empire, Vinyl), as well as James, Carter, Jamal Henderson and Spencer Beighley. Filming is already underway in Akron and Cleveland. We’ll see how this project turns out when it comes to Peacock in 2023, and we’ll see how well Cook does at portraying a young James.

[The Hollywood Reporter; player-submitted photo via On3]