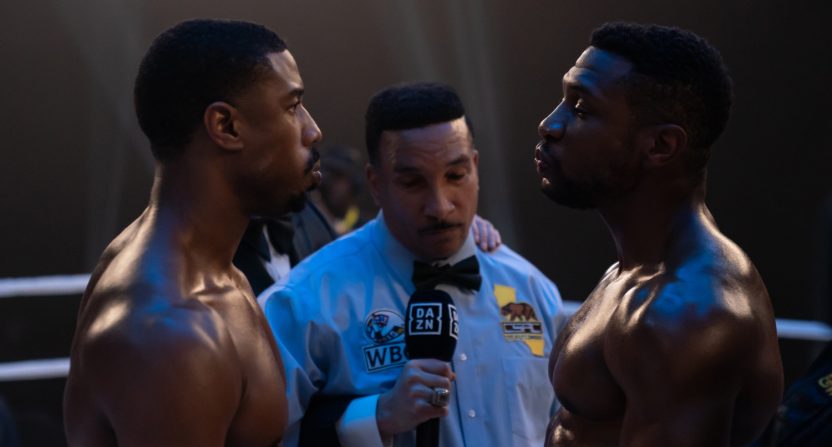 While the Creed series of boxing films began as a spinoff from the Rocky series, it’s taken on incredible life in its own right. The first Creed, directed by Ryan Coogler (known for Fruitville Station then, he would later do Black Panther and the upcoming Black Panther: Wakanda Forever) and starring Michael B. Jordan as Adonis Creed, came out in 2015, and it earned a ton of awards (including an Academy Award nomination for Sylvester Stallone as Best Supporting Actor) and was named to many Best Sports Movies lists.

The 2018 sequel Creed II, directed by Steven Caple Jr. (following a short stint where Stallone was initially set to direct), did decently as well. And there’s now a third installment en route, directed by Jordan himself (in his directorial debut). MGM released a trailer for Creed III Tuesday ahead of its March 3, 2023 theatrical release:

As that trailer shows, there’s quite the storyline here. The film, with story from Coogler, his son Keenan Coogler, and Zach Baylin and a screenplay by Keenan Coogler and Baylin, sees Damian Anderson (Jonathan Majors, seen at right above) coming back into the life of Adonis Creed (Jordan, seen at left above), training with him and then eventually fighting against him. Here’s a description of that from a release:

After dominating the boxing world, Adonis Creed (Michael B. Jordan) has been thriving in both his career and family life. When a childhood friend and former boxing prodigy, Damian (Jonathan Majors), resurfaces after serving a long sentence in prison, he is eager to prove that he deserves his shot in the ring. The face off between former friends is more than just a fight. To settle the score, Adonis must put his future on the line to battle Damian – a fighter who has nothing to lose.

Creed III  also features at least four prominent returning figures from Creed II: Tessa Thompson as Bianca Taylor, Phylicia Rashad as Mary Anne Creed, Wood Harris as Tony “Little Duke” Evers, and Florian Munteanu as Viktor Drago (son of Rocky IV‘s Ivan Drago). And famed real-life boxer Saul “Canelo”  Álvarez is in it as well. There will certainly be more on Creed III to come ahead of that March 2023 release, but this trailer is certainly a promising start.