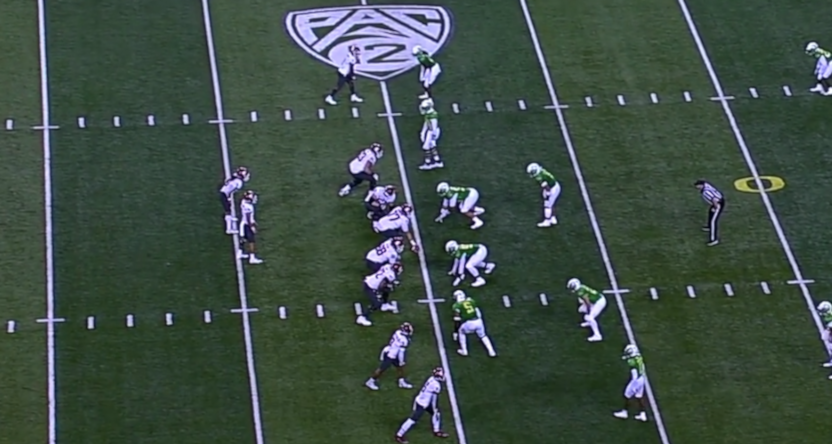 A recurring college football storyline this year has been complaints about video quality on particular game broadcasts, often of Pac-12 games. Most of the complaints there have been about ESPN broadcasts (including our coverage of the Stanford-Oregon complaints last month), but some have been about FS1 broadcasts. But ESPN took particular fire this week after John Canzano of The Oregonian wrote about the long-running Twitter and website complaints (and the specific complaints for Washington State-Oregon this week, seen above) and got camera operators and other broadcast staffers to weigh in, significantly diminishing the predictable ESPN PR “This is normal” response; in fact, Canzano’s column even appears to have led to some tangible changes for upcoming games, as he detailed in a follow-up piece Monday. But further Saturday viewership numbers that came out Tuesday helped further illustrate how foolish it was for the much-criticized “E” truck to be on this game in the first place:

Washington State at Oregon (1,991,000 viewers): Most-viewed game starting after 10 p.m. ET on any network since Sept. 8, 2018 (Michigan State-Arizona State), per ESPN.
Just imagine if it wasn't shot via a Kinetoscope.

Here are P12 Network and ESPN pictures side by side pic.twitter.com/lGxlZ1HFyg

It’s somewhat understandable that different broadcasts are going to come with different levels of staffing, and with different levels of video quality. At ESPN alone, there are a whole lot of ESPN+-only events that never would have been shown on a linear channel in the old days, and the expectations for the broadcast quality there are understandably lower. But it’s less understandable why a main-network ESPN game looked like this, even if it started at 10:30 p.m. Eastern. And the Wilner tweet is particularly notable for illustrating how much better of a broadcast came on a (barely-distributed!) conference network in the same timeslot.

And the audience numbers help reinforce what a poor decision that was for ESPN. There were clearly a ton of people who wanted to see this game (involving CFP rankings #3 Oregon), and they were treated to an obviously subpar broadcast. And this part of Canzano’s Monday column feels particularly notable:

I asked [camera operator Bill] Rice about the absence of a set day on a broadcast and he said, “In my 30 years it was the first time ever for me representing Disney that we didn’t have a set day.”

That dovetails with the narrative I’ve heard in the last 24 hours from other ESPN/ABC contractors working sporting events. They believe Disney is hyper-focused on cost cutting and is especially aggressive with low-priority events. Saturday’s game at Autzen Stadium didn’t utilize a stage manager, for example. It also used a back-up spotter. The spokesperson pushed back at that “low budget broadcast” comment, but that’s a logical conclusion for any of us to make when we tune in and see an underwhelming broadcast.

Canzano’s column goes on to note that ESPN said they’re “providing the ‘E crew’ new equipment this week,” so maybe that helps fix this. However, it’s notable that “E” does not denote the last game ESPN is televising that week, though; they televise many more games than that, as our announcing schedules show, with three games on ESPN proper ahead of this, two on ABC, three on ESPN2, and many more on ESPNEWS, ESPN3, and ESPN+. And that’s a big part of this; none of those other games on less-prominent cable networks or streaming-only platforms wound up with anywhere near the picture-quality backlash of this game on the main ESPN network. So that at the very least brings up some resource-allocation questions.

And that speaks to what the key issue is here. It’s not just that ESPN delivered a subpar broadcast of a game, it’s that they delivered a subpar broadcast of a game on the main ESPN network, and one involving the #3 CFP-ranked team, and one that drew the most viewers in that timeslot since 2018. That raises a whole lot of questions about their priorities, especially when they relate to the Pac-12; this was one of the few cases in recent years where a late Pac-12 game carried significant national interest, and yet, that didn’t get it better equipment. And it’s worth wondering why ESPN thought using a poor truck for this game would somehow escape notice. In the end, it clearly did not fly under the radar.