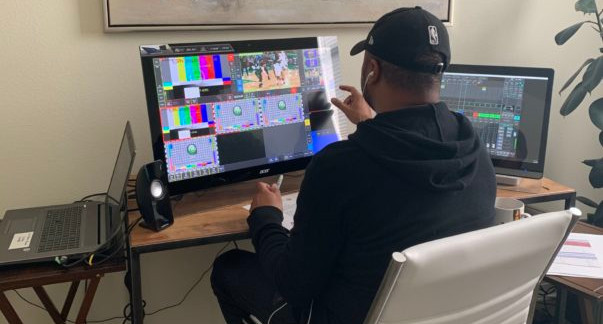 Several of ESPN’s studio shows have moved to versions where all the talent appears from home during the era of social distancing, but the network is going even further with NBA show The Jump. The Jump last aired as a stand-alone show on ESPN on March 19 (they’ve since been doing some shorter segments seen on SportsCenter, YouTube, and other ESPN platforms), but ESPN announced this week that it will return as a half-hour daily show on Monday, April 13 (with a show including an interview with Scottie Pippen about the 90s Chicago Bulls documentary The Last Dance, which ESPN is rolling out beginning Sunday, April 19). And what’s particularly interesting there is that The Jump will be the first show with this workflow to be produced entirely from the crew’s homes. Chris Calcinari, the senior vice president of remote production operations for ESPN and ABC Sports, has more on that in a piece at ESPN Front Row; here are some key comments on how they’re pulling this off with the help of new technology.

The goal of the committee was to review the best option for producing studio shows at a high-level, while allowing all of the associated staff to work from home. The “Live from Home” committee reviewed several cloud-based solutions that work well to execute very basic productions, but did not allow for a large volume of video, graphics or animation. The committee quickly turned to several tools that have been deployed in the field and could be operated from afar.

…The Simplylive ViBox is the core system supporting this new workflow. The ViBox is based at our Seaport Studios in lower Manhattan, but controlled from a staffer’s home in Los Angeles. The ViBox touchscreen production system provides us with the ability to cut/dissolve/wipe between cameras, video and animation sources. It also allows us to store and playback video and insert graphics.

Simplylive developed a new product to reduce the needed bandwidth, which makes the Live From Home initiative possible. Developers in the U.S. and Hong Kong have worked around the clock for the last week to perfect this new product for ESPN’s use.

It’s fascinating to hear about everything that goes into shifting production from studios to fully remote worksites. Calcinari also mentions that it also involves a VIZrt graphics device in the Seaport studios that’s controlled from operators’ homes in Connecticut, that the talent and crews involved are constantly communicating via the Unity Intercom app, and that the staffers involved are pulling video from ESPN servers, color-correcting it and sending it to ViBox. All of that’s pretty complicated, especially when it’s now happening off-site in a way that wasn’t originally anticipated.

That piece is also notable for the photos of the many different workstations crew members have. Some, like remote operations associate manager Jarrett Baker and coordinating producer Hilary Guy, are still supervising their kids while doing their work. Others, like coordinating director Ty Frison (pictured above), are having to balance a variety of monitors and laptops on home desks. Still others, like producer Danny Corrales, have had to retreat to quiet spots for portions of their job (in Corrales’ case, that’s his closet). And remote operations manager Ryan Zainc has built a temporary “comms room” in his living room to support this, which he shows off in this video:

All in all, this is a good illustration of how complicated it can be to shift TV production from one place to another. But it’s also perhaps a useful test project for ESPN; this particular approach is only for The Jump for now, but that’s only the “initial focus of this workflow.” And if this goes well, it’s possible to see ESPN (and perhaps other networks) shifting more and more shows to higher levels of remote production during this pandemic.