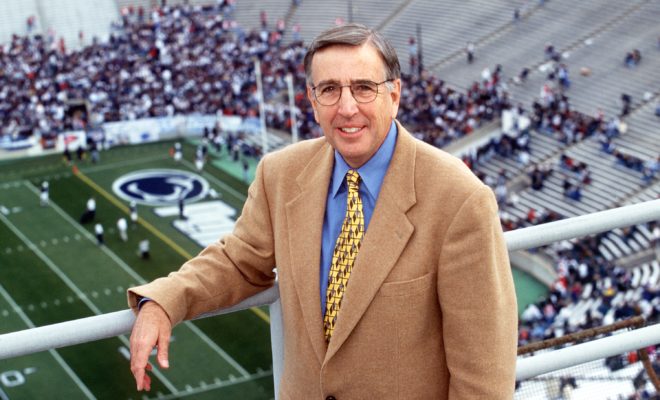 The news of Brent Musburger’s departure from ESPN came as a mild surprise. Even with the fact that he’s 77, as recently as last year, Musburger said he would never retire, but the time has come to wrap up a very extensive career. From his days as a newspaperman in Chicago in the 1960’s into the 1970’s, to becoming a sportscaster for CBS and pioneering the NFL studio host postiion to being the Face of CBS Sports until 1990, then joining ESPN/ABC where he continued to fill many roles, Musburger has been one of the giants in sports broadcasting.

He’s been known for his gambling references as well as his patented “You are looking liiiive!” catchphrase that has begun many a sports broadcast. He’s been a studio host, play-by-play man as well as a local news anchor in Los Angeles. There’s no doubt that Brent Musburger has to be considered as one of the top personalities in the history of sports media.

Let’s take a look at Musburger’s career timeline with some of the highlights and some lowlights:

As a writer for the Chicago American newspaper, Musburger criticized U.S. Olympic sprinters John Carlos and Tommie Smith for their Black Power salute on the medal stand in Mexico City to protest racial injustice. Musburger wrote they “looked like a couple of black-skinned storm troopers,” and also called them “ignoble” and “juvenile.” Musburger never apologized to either man for his column.

CBS names Musburger as the host of The NFL Today. With Irv Cross, Phyllis George and Jimmy “The Greek” Snyder, the Sunday NFL pregame show becomes the most-watched NFL pregame show. Here are some videos of Musburge hosting the NFL Today in the 1970’s. First from 1976 and the NFL Today on-site at the Washington-Minnesota Divisional Playoff game:

In addition to hosting the NFL Today, Musburger also did the halftime updates and they were much longer than they are today. Here’s one halftime segment from November 27, 1977:

Here’s one more NFL Today halftime segment from December 2, 1979. Check out the scoreboard:

A year later with Rick Barry, Musburger was at the mic for the epic triple overtime NBA Finals Game 5 between the Boston Celtics and Phoenix Suns at the old Boston Garden:

In addition to the NFL and NBA, Musburger became host of The Masters, the Belmont Stakes, U.S. Open tennis and just about eviery big event for CBS. He would host seven Super Bowls on CBS (X, XII, XIV, XVI, XVIII, XXI and XXIV) and two on ABC (XXV and XXIX).

Brent had been host of college football for CBS, but eventually became the lead voice for the sport. For this Thanksgiving Weekend game between Boston College and Miami (FL), Musburger called the duel between quarterbacks Doug Flutie and Bernie Kosar. And it all came down to the final play where Flutie hit receiver Gerard Phelan in the end zone for the win. His partners for the game were Ara Parseghian and former USC athletic director Pat Haden:

Musburger becomes the lead announcer of the NCAA Tournament replacing Gary Bender. Brent would team with analyst Billy Packer and would call some of the most exciting NCAA Final Fours and Championships. In his first call of the NCAA Championship, Brent was at the mic for the Villanova upset of Georgetown at Rupp Arena in Lexington, KY.

You may have seen the 30 for 30 on it, but here’s the Catholics vs. Convicts game, Miami (FL) led by Jimmy Johnson at Notre Dame with Lou Holtz in its entirety. Brent called it with Pat Haden.

After attempting to negotiate a new contract with CBS, the network announced during the NCAA Final Four that Musburger would no longer work with the network and his last game would be the NCAA Championsnihp between Duke and UNLV. And while UNLV ran away with the game, 103-73, people stayed with the game to see what Musburger would say at the end. Here’s his farewell to viewers with Billy Packer by his side:

Later in the year, Musburger would join ABC Sports where he would call college football, college basketball, the Little League World Series, MLB, host Monday Night Football, the 1991 Pan American Games, and contribute to ESPN Radio as either a commentator or calling the NBA.

Musburger becomes the lead announcer for college football on ESPN/ABC. He would call the 2000, 2004 and 2010-2014 BCS National Championship Games.

In the aughts, Musburger would also be 2006 World Cup studio host, Indianapolis 500 host, NASCAR host in 2007.

Brent could be responsible for some corny lines at times. This year would not be any exception. For the 2011 BCS Championship for Oregon and Auburn, Brent would pull out “This is for all the Tostitos,” for the sponsor of the game. Oh Brent:

During the BCS National Championship Game between Alabama and Notre Dame, Brent notices Katherine Webb in the crowd and makes her a celebrity:

ESPN demoted Musburger from its lead voice as college football and assigned him to the SEC Network where he called football games with Jesse Palmer. During that period, he would call various bowl games including the Las Vegas Bowl, 2014 Orange Bowl, 2016 Rose Bowl and 2017 Sugar Bowl, but he would no longer call the college football championship.

Musburger is given the Vin Scully Lifetime Achievement in Sports Broadcasting by Fordham University.

ESPN changed Musburger’s college basketball from the Big 12 to the SEC for the 2017 season.

On New Year’s Day, Musburger made controversial comments on Oklahoma running back Joe Mixon who was seen on a tape hitting his girlfriend. They were not received well:

On January 25, Musburger announces that he will leave ESPN and call his final event, a college basketball game between Georgia and Kentucky on January 31. His brother and agent, Todd Musburger, said Brent will be part of a sports handicapping business based in Las Vegas