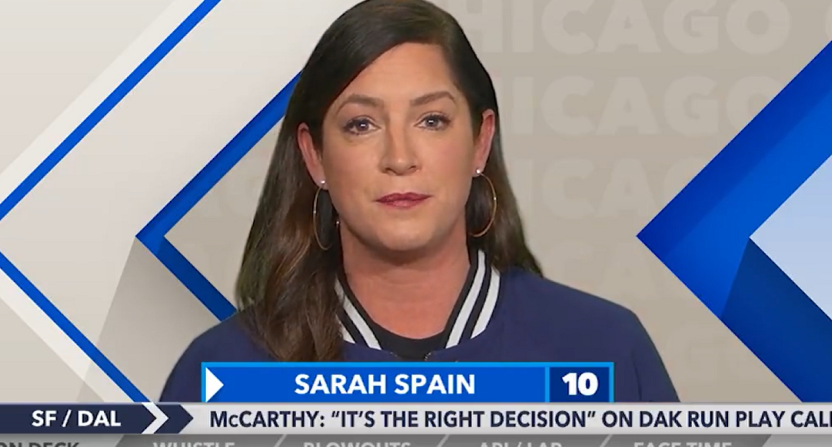 Sarah Spain has spent her career pointing out various examples of injustices, racism, and sexism in the world of sports, but her coverage of Deshaun Watson has illustrated another point entirely: the power of misinformation.

Granted, society shouldn’t need more examples at this point of how quick people are to believe anything published on YouTube or Facebook, but what Spain is dealing with feels important enough to highlight because it also demonstrates the problem of whataboutism, a fallacy that currently plagues the entire discourse whenever sports media discussion turns to anything beyond the field of play.

The whole context is out there, of course, but basically all you need to know going into this: Spain described Watson as a “potential serial predator”, which given 20+ accusations of misconduct feels like a fairly even-handed way of describing the embattled quarterback, whether or not criminal charges were brought. In turn, someone posted a video on YouTube accusing Spain of racist treatment of Watson by questioning why she hadn’t covered similar issues of misconduct from white men in sports. (We’re not linking to the video or mentioning the creator here. It’s there if you really want to find it.)

Because it’s 2022, people (in some cases almost assuredly burners of some kind, but bad faith acting is sort of the entire issue with whataboutism) watched a short video on YouTube and took to Spain’s mentions without bothering to do any of their own vetting or research.

I think what he's asking is where is your scathing tweet about Daniel Snider? Or how about Ben Roethlisberger? You don't seem to have the same energy for these men as you did Deshaun Watson and Kobe Bryant.

That’s just one example, but you can see the issue here. Spain certainly did.

My record on issues of race & equality speaks for itself, but that doesn't mean it's not exhausting & painful to have people attacking me, my integrity & my principles.

The fact that these accusations, attacks & threats only come up when I talk DV/sexual assault is so telling.

The key point to remember here is that none of the people trying to attack Spain’s credibility here are doing it because they’re upset about a lack of equitable criticism for people like Ben Roethlisberger. It’s, if anything, the opposite. They’re attempting to paint a voice in media as hypocritical (or worse) to undermine credibility. It’s a standard operating procedure at this point for a certain segment of the online population.

Well, for the millionth time…

It's right here and on Spain & Fitz podcasts:https://t.co/qJPbfl1San

I was an update anchor & not employed as a writer, radio or tv host when he was initially accused, so unless you wire tapped my house you won't have my thoughts from back then. https://t.co/LH8W35HxRz

Wouldn't it be nice if the hundreds of people asking me about Ben *NOW* actually CARED about multiple-time accused rapists getting a pass b/c they throw a ball good?

And wouldn't it be nice if ppl spent their time learning about assault/DV instead of attacking the people who do? https://t.co/yo0zY37Yzm

This is a problem that is absolutely not going to go away, because there are too many people out there with horrible opinions, an aversion to critical thinking, and internet access. Spain, if anything, did way more than she needed to here, but the fact she came with receipts offers such a perfect response; if these people truly mean what they’re saying about how it’s not about Watson specifically but a desire for equal coverage, here you go!

Most of the time they don’t deserve even that much attention, but sometimes it’s powerful to provide evidence that punctures their entire bad faith argument, even if only to expose how stupid the entire thing is. This certainly counts as one of those times.