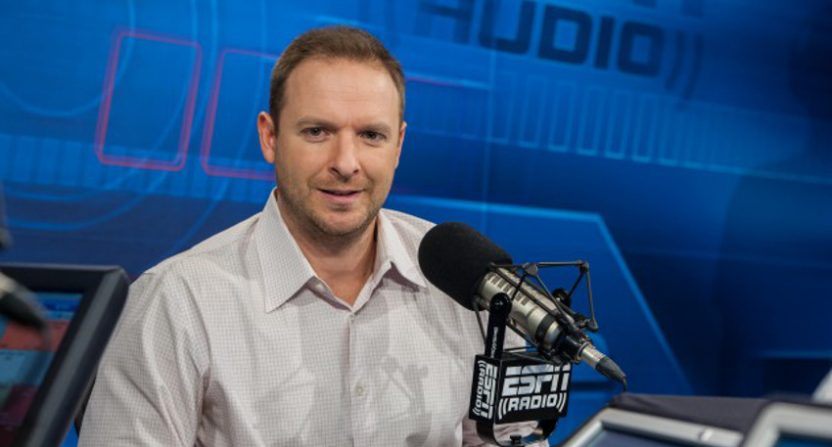 Despite all the layoffs, Ryen Russillo is still with ESPN, but there was a long period where even he didn’t think he would be. Russillo addressed the layoffs and particularly the layoff of his broadcast partner Danny Kanell on his radio show Monday, and then got into talking about how he felt the axe was coming for him and blasting the inaccurate report of his reduced role, which he said was leaked by a former agent. The full show can be found here (sadly, the file still carries the “Russillo and Kanell” filename); here’s the five-and-a-half minute opening clip of Russillo addressing the layoffs, Kanell, his anticipation of being laid off, and then the inaccurate report.

Russillo started with comments about how much he was going to miss Kanell as a broadcast partner and as a friend, then went Russillo went on to discuss how he felt he was going to be cut for six weeks. He was confident enough that a layoff was coming that he was contemplating relocation and looking at houses in Los Angeles. He then talks about how he’s happy to still be at ESPN, and although he doesn’t know what’s next for his show in terms of cohosts, he’s excited to still be doing it. The most interesting part may be what comes at the end, though, about 4:37 in, where Russillo has strong words for the false report in The Hollywood Reporter that he was taking a reduced role, saying it was planted by his former agency and telling them “stop messing with me.”

“There is one other little thing that I want to add, and that is that there was a report that I was going to have a reduced role, which meant a lot of people thought I had begged for my job back, and that I offered up less money to come back. It’s not even remotely true. I’m going to be working more, and I’m still under contract through next summer. It was planted by an agent who decides to keep messing with me, because they’re all hurt about the fact that I left them. And the thing is, I have told the nicest version of our relationship as far as my story goes with this agency. And I can only tell you just to get out of my way, and stop messing with me, because you’re going to lose, and that’s it.”

Russillo then wrapped up the segment by talking about the future.

“I want everyone to understand, this place is behind me, I am pumped to be here, I miss my friend, I think all of those emotions can happen at the same time. But I’m here to stay, and we’re going to talk sports the rest of the show today.”

The earlier part of that audio clip is important, too. First, here’s video of Russillo’s opening tribute to Kanell:

Russillo opens up about the changes made to the show

Listen to his thoughts in full in hour 1 of the podcast https://t.co/nI2cPkfmWT pic.twitter.com/adDMyPF3Uf

After that (around 2:30 in the audio clip), Russillo spoke about how he thought he would be one of the layoffs.

“I’m just thinking about [Kanell], I was thinking about him all week, because this thing was really weird for the two of us, because here’s the deal. I thought I was gone, okay? For about six weeks, in sniffing around, I thought I was done. And I was off last week because I was out in Los Angeles shopping for houses, because I was finally going to make the move I’ve talked about a bunch of times on this show, ‘Hey, I want to go out there, I want to work in television, I want to do all of these different things.'”

“And this is so weird, but I was saying goodbye to Greeny [Mike Greenberg] after Mike and Mike hit, I said goodbye to a bunch of people at SportsCenter that week, I said goodbye to a couple of security guards, Van Pelt and I scheduled a show where we were going to work together on Wednesday on SportsCenter, then Thursday was going to be my last show right before the draft. And then I wasn’t. And it’s just sort of the way these things happen.”

Russillo said he was ticked off about the possibility he might be one of the cuts, but almost resigned himself to it, and then his excitement about staying after all was tempered by losing Kanell and other colleagues and friends.

“I was right there where competitively, I was so mad for like two days. I’m like, ‘Wait, I’m not good enough? I’m not one of those guys any more?’ And then Danny and I, going to commercial breaks, I’d be looking at houses I was thinking of buying. And then, of all the things to happen…to then be like, it’s great to feel wanted, and I’m psyched, but I’m losing a neighbor, I’m losing other neighbors. I get it, I get all these things, I get why it happens, but I wanted everyone to at least hear me say that, because it would be so weird to crack the mic today and be like ‘Clippers, blow it up?’ and not ever mention Danny.”

He went on to talk about how he is excited to still be doing the show even with all the uncertainty about what it will look like post-Kanell, though.

“So I’m psyched to be here. I think you guys know that throughout all your years at any place you’ve worked, if you’ve worked there long enough, you know whatever the complaints are, the downs,  that the reward is still really, really great. And that’s how I feel about this place. That’s how I feel about the fact I still have a show in this slot at 1 p.m. Eastern. I’m actually pumped about that. I want this to work out.”

“I don’t know what the plans are, I really don’t. I don’t know who my cohost is going to be. We don’t know that right now. This thing happened so fast. But if you like me, and you’ve listened to me this long, and you trust me, we’re going to figure this out and hopefully get this thing going in the right direction.”

Those are strong words from Russillo on a lot of fronts, but the comments about his former agent planting negative stories particularly stand out, as do the comments on how he sure he was that he was going to be one of the cuts. Those are both deeper looks behind the curtain than listeners usually get. Russillo’s honesty here is appreciated, as is his tribute to Kanell and his other colleagues who were cut. It will be interesting to see what the future holds for him.