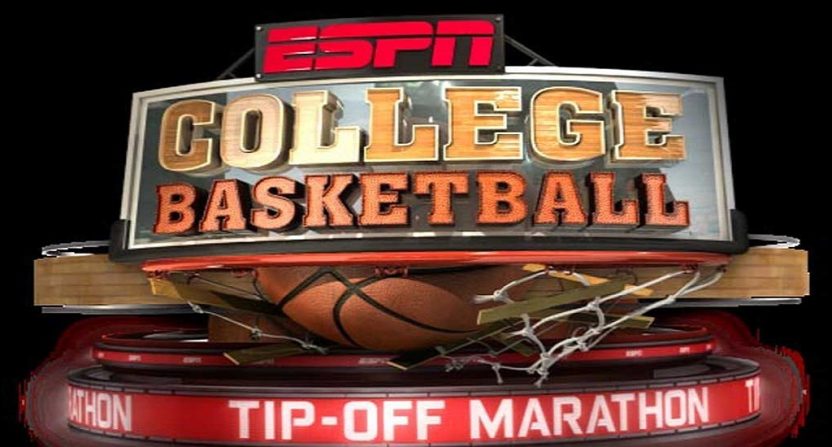 I miss ESPN’s Tip-Off Marathon. I miss it terribly and I want it back. Somebody at The Worldwide Leader in Sports, please grab an automated external defibrillator and shock this wild, wacky, and wonderful event back to life.

For nine straight years, it was a magnificent way to unofficially start the college basketball season. The concept was ridiculous. That’s what made it fun, especially for those who care about the sport.

When we first heard about the Tip-Off Marathon in 2008, it sounded like something from a Dick Vitale fever dream. What a minute. ESPN is broadcasting live college basketball over its multiple channels for 24-plus hours? No breaks. No problem.

The inaugural event featured fourteen games played in five time zones on ESPN, ESPN2, ESPNU, and ESPN360.com. It started at midnight with UMass at Memphis and finished with Kentucky at North Carolina. When ESPN gets behind something, it has the resources and platforms to make it special. Back then, Awful Announcing called the Tip-Off Marathon “the greatest (and craziest) idea.”

The first Saturday of college football season is special. So many look forward to it. But college basketball never before had a unifying, day-long celebration. The Tip-Off Marathon was something to look forward to every November.

You sunk into the sofa. You kept the coffee brewing. You called in sick for work. You were ready. The NCAA Tournament was the only other time when you could enjoyably overdose on basketball. But you didn’t have to wait until March. The stakes weren’t the same, but it was still a smorgasbord.

Some of us were passionate enough (or dumb enough) to stay up and watch every game. Why not? You got to see teams that were contenders as well as mid-majors that could make a March Madness run.

The Tip-Off Marathon was one of ESPN’s boldest achievements. If it were still around, it would likely be next week, culminating with the Champions Classic, which remains an annual showcase but always features the same teams: Kentucky, Duke, Michigan State, and Kansas.

So, why was The Tip-Off Marathon killed? Well, it seems like the financial cost and logistical burden became even too much for a network giant. Guess they thought it was better to show more debate shows featuring soul-crushing, inane banter.

In 2017, ESPN spokesperson Josh Krulewitz told Sporting News that the Marathon “presented some programming challenges and will not be part of our schedule this season.”

Just found out the 24 hour ESPN College Basketball Tip-off Marathon isn’t coming back. All my hopes and dreams are now crushed.

Understandable and yet still profoundly sad. My friends, you never felt more alive than when you’re fighting to stay awake while watching Florida Atlantic at Hawaii at 4 a.m. Eastern time. You guzzled down all the soda medically allowed. You pried open your eyes with A Clockwork Orange-type of commitment.

That’s how much the Tip-Off Marathon meant to some of us.

It wasn’t perfect. Some complained about games starting in the early morning hours. Mike Francesa did. But the Tip-Off Marathon was not concerned about the senior citizen demographic. An a.m. weekday tipoff was a chance for mid-majors to get the exposure they normally wouldn’t receive in November. Being a part of it meant that your school mattered. And many college students were happy to participate in something different.

Who wouldn’t want to go to a sporting event in pajamas?

It would be fantastic if the Tip-Off Marathon returned. However, that seems unlikely. The network offers plenty of college basketball, including games online via ESPN+. It’s more interested in devoting maximum TV dollars to the NFL, college football, and the NBA.

Guess we should be grateful that we got to experience something unique. For a moment in time, you could watch live college basketball games around the clock.

And it was glorious.