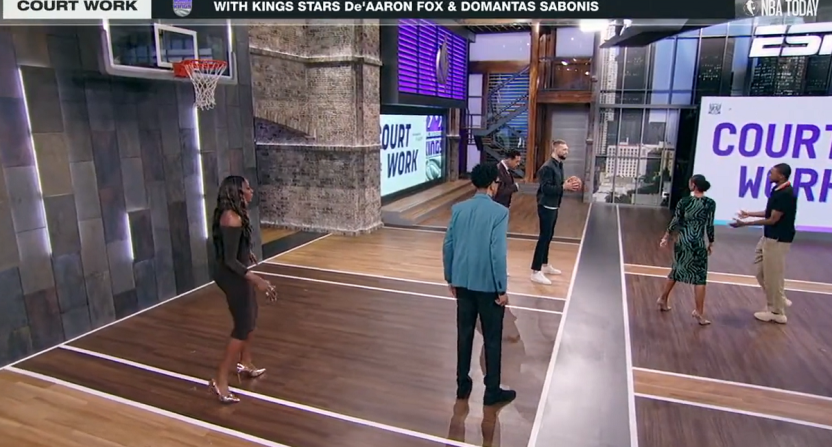 That’s not to say that shows like this one never offer anything interesting. If anything, ESPN’s sport-specific daily programming is almost always a step up from the morning debate shows that still reign across cable by virtue of the people involved usually seeming to like each other.

But conviviality doesn’t always equal quality (see also: a few episodes of Ted Lasso season 2), and too often the topics spin away from discussing the on-court sport and devolve into whole segments devoted to the land of transactional make-believe. Fake trades! Draft tanking! Future free agency!

There’s no way to compile this, but if you even just narrowed it down to every bit of ESPN NBA content across all their platforms (television, digital, editorial, audio, etc) the percentage of time spent on “what-if” speculation for transactions that never occurred and/or never had a chance of occurring would be staggering.

That’s one of the reasons Brian Windhorst went viral in 2022: he hinted at knowing something might happen, and then that something actually happened. If that was commonplace in NBA media no one would have blinked an eye!

Which brings us back to Tuesday, when the NBA Today crew were joined by Domantas Sabonis and De’Aaron Fox in studio. Rather than spend the whole time chatting about the Beam or any number of other banalities, the show decided to actually take advantage of having real live NBA players in their studio, letting Fox and Sabonis show off one of Sacramento’s staple sets.

The result: two minutes of delightful television for basketball fans of any level.

Fox and Sabonis walking the NBA Today crew through their "pistol 5" action. really illustrates to us the multiplicity and versatility of the offense.

De’Aaron Fox is a delightful presence here, displaying walk-and-talk abilities that wouldn’t feel out of place in an Aaron Sorkin production. (This two minute segment is more valuable than anything The Newsroom ever provided society.)

It’s a loose bit of production, too; things aren’t being overexplained, no one is taking it too seriously, and perhaps most importantly no one is stepping on the actual players as they describe and demonstrate. I’m a fairly intense NBA fan and have played, watched, and/or written about basketball pretty much since kindergarten, and I was still enthralled as Fox demonstrated the versatility of one simple action in the hands of two instinctive playmakers with a budding chemistry.

I could very easily see this kind of breakdown working were I a middle school basketball fan home watching, too, though. It wasn’t laden with details that can bog down some more serious analysis, and Jalen Rose chiming in to note the fact that both players are left-handed was an excellent value-add (and a great reminder that it’s Jalen freaking Rose there on screen, an iconic ’90s player who knows more about basketball than viewers can ever hope to, even if he doesn’t always get the chance to show that.).

This is absolutely something panel shows like NBA Today should strive for. That it’s Fox and Sabonis running viewers through this play is telling, too. Sabonis is only a King thanks to last season’s trade with Indiana that sent Tyrese Haliburton to the Pacers. That was after months of trade rumors linking Sabonis to countless other teams and basically zero speculation that had Haliburton as available. All of that talk was wasted as soon as Sabonis was sent to Sacramento.

No matter what happens at the deadline, though, the Kings will still be running this Fox/Sabonis pistol set for months (and likely years) to come. It’s pretty clear which type of content has more lasting value.