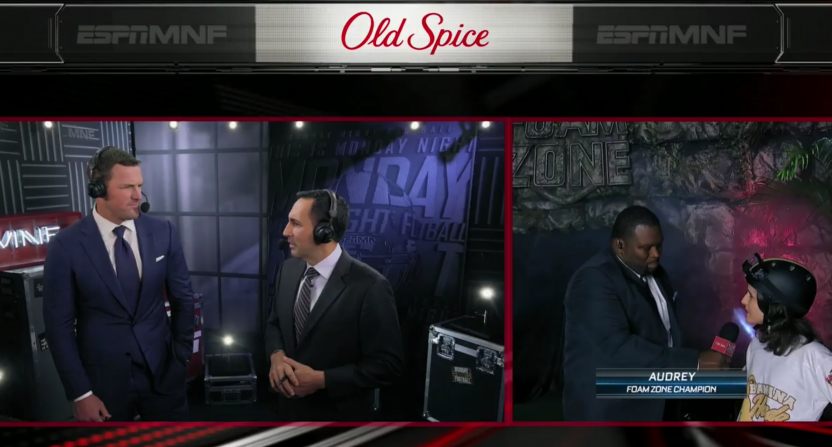 Since I wrote a mixed review of ESPN’s new Monday Night Football announcing setup, I’ve been kind of floored with the consistent and increasing amount of criticism the new setup has drawn. Surprisingly it’s not limited to sports talk or my social media echo chamber either. I’ve overheard people discussing it out at restaurants, bars, and parties, even a lot of my social circle, which generally avoids social media.

The reality is that a significant slice of the MNF audience believes the broadcast has taken a major step backwards. While no broadcast booth or announcer is universally liked (in fact most “A” booths usually have a healthy % of the viewing audience thinking they suck, it’s unavoidable), the constant and loud negative feedback has to be troubling for ESPN. Fans aren’t picking at the edges, they’re saying it’s flatly a bad broadcast, comparing it to regional games on Fox and CBS. That’s not what you want to hear about your nearly $2 billion annual investment.

I don't know how the MNF broadcast feels like a Fox/CBS C-level broadcast, but here we are. How did ESPN decide these were the people to represent the most important sports broadcast there is? Lol. Note: Tess is great. It's the other 2.

Halfway through year one of the new booth, we’re getting to the point where there seems to be some momentum towards ESPN making some tweaks. If they do, here are a few things they should be looking to improve.

Jason Witten is in over his head

By far the biggest problem. SB Nation dove deep on this last week. His performance dominates the online chatter and while he has made some progress, I’m not sure fans are going to come around.

Example of what I don't like about Jason Witten: He said of Eli Manning, "He's off to a great start. He's 8-for-8." Without the context of how short those passes have been. The Giants have punted on both possessions, and both punts came after short completions on third-and-long.

Witten makes mistakes, he’s inconsistent, gets tongue tied, and can be awkward at times. Given the frequency at which these issues have come up at the start of his broadcasting career, the blunders have almost become Witten’s brand (similar to Mike Carey’s brief stint as CBS rules analyst), with viewers on the lookout for his next error.

If Witten debuted with Fox or CBS doing regional games or even on ESPN’s college side, I imagine these rookie mistakes would go largely unnoticed. That’s not what happened, though, and Witten has yet to have a clean game. I’ve actually thought he’s improved, but the glaring errors are outweighing the improvements around the edges.

And, social media being what it is, those big mistakes are always going to pop more (and have more staying power) than the instances where Witten offers valuable and coherent insight.

According to Jason Witten, Aaron Rodgers pulled a rabbit out of his head, which would be REALLY magical #SFvsGB pic.twitter.com/ld5iH1ny3D

It’s early on, though, and I do see the upside ESPN sees in Witten. That said, I think he in particular is getting to a place where the dial test of negative sentiment about his performance is tanking. Even if it doesn’t work out for Witten (which is somehow a possibility, even this early on), Witten could still have a future in broadcasting, and even a successful one. Starting in one of the most visible slots in broadcasting just hasn’t given him the time he needs to get comfortable, and ESPN might not be able to afford to wait.

This whole Booger in a crane thing is just not working

Many have suggested that ESPN move Booger up to the booth. Would you be in favor of that move?

As I’m writing this, only 16% of respondents have a preference for McFarland staying in the crane. I honestly don’t really know what ESPN was going for with the two-and-a-half man booth. It’s clunky because all involved have to direct comments and questions to each other explicitly, and there are lulls in the broadcast at times when it’s not clear which of McFarland or Witten should be jumping in.

Both their work suffers, and Tessitore certainly has the added challenge of trying to gin up conversations when it’s unclear whether he’s directing a question to “Witt” or “Boog”. It’s a small touch, but after hearing both announcers names a few dozen times a game, you kind of realize it’s a necessary awkwardness born out of this odd setup.

“BOOGER! GET OUT OF THE FREAKIN WAY!”pic.twitter.com/FhWbyVrSVI

McFarland has received better reviews than Witten, but he could just be benefiting from Witten setting the bar so low. If this was Tirico and Gruden with McFarland in the crane, would fans still embrace him? Some would, but I’m not quite there. If he does stay on, it feels like the crane will be gone, though.

Jason Witten and Booger McFarland both called Amari Cooper a "Number 1 receiver." What a terrible looks for ESPN.

Where did Lisa Salters go?

Not much to say here other than with this new setup, Salters is getting way less airtime. It’s gotten a bit better, but you almost forget she’s there for long stretches of time. With Booger near the field, they often go to him for what he’s hearing or seeing instead of going to Salters, who has been doing this for decades and is regarded as one of the best in the industry.

The MNF broadcast still has no idea that that was a clear fumble. More worried about who’s getting most time on the mic. Embarrassing. Not to mention the best person on the team Lisa Salters cant buy a second of air time. Total joke ESPN.

I’ve never been much of a sideline reporter enthusiast, but I miss Salters. It’s a shame she’s been more or less boxed out with the new setup.

Sponsorships are now a distraction

I don’t even know where to start with this, but:

But that’s small potatoes compared to the halftime show, which is my new favorite thing. Every week, ESPN promotes their new halftime format as being COMMERCIAL FREE AND SPONSORED BY GENESIS! I love this because every week, people are baffled when there are commercials and then they google the halftime show and read our site. It’s a random traffic spike every week at 10pm ET and on one hand, I get their confusion/pain, but on the other hand, hell yeah, pageviews.

I’ve been walked through how ESPN believes that the halftime show is commercial free and let’s just say I, as well as most people, take great umbrage with that claim. Plus I’m not exactly sure who if anyone cares about the actual musical acts themselves.

Tess' amazement reeks of "I've watched way too much MACtion"

I debated putting this in here, as I like Tessitore and enjoyed him doing college games. I definitely think he’s a step up from McDonough, but a big step down from Tirico. That said, a good amount of folks don’t like his style, which involves going HARD on a lot of calls, in energy and volume.

It’s subjective, but with Tessitore some folks just don’t like his style (to them it comes across as manufactured), and would prefer a more subdued enthusiasm for the game he is calling. I don’t really view this as an issue because the amount of criticism aimed at Tessitore seems in line with what you’d see for most “A” team play-by-play announcers, but he is a new ingredient in the booth, so it’s tough to separate him from the overall criticism.

There isn’t an obvious solution for an overhaul

This is probably another article, but if you’re ESPN and you’re feeling the need to make a change, there isn’t much you can do other than move Booger up to the booth. Witten is making a lot of money (reportedly, over four million a year) and while you could move him to a studio role or to college games, there’s no spinning that as anything other than an L.

I’m really starting to hate how this MNF broadcast is produced as a whole.

Everything is so forced, pre-packaged.

How is it possible they’ve taken a step back after Gruden?

The weird sponsorship stuff is money in the bank, so that’s not going anywhere.

From an announcing standpoint, I don’t think ESPN would or should move on from Tessitore. Who on ESPN’s current roster would you want to see in that role? A few years ago ESPN had Tirico, Nessler, and Musburger, so there were certainly some interesting options. But now, ESPN has tried options 1A and 1B with McDonough and now Tessitore. Mike Tirico isn’t walking through that door.

On the analyst side, if ESPN was confident in someone they had under contract, they’d have the job right now. And considering the amount of testing they reportedly did, it’s hard to imagine they have an instant improvement waiting in the wings; if they did, that person would probably just have the job. Even if Witten doesn’t work out, it’s unlikely they can just hope for the best with Tessitore and Booger. At that point it would probably mean another full reshuffle, both to add some star power and to try to wipe the slate clean.

Options that would be enticing include Peyton Manning (he is doing work with ESPN), Gruden (though if he were going to be fired by the Raiders that probably would have happened already), and perhaps Drew Brees. Unless Manning decides he’d like the big job (which could cut into his Nationwide-sponsored awkward bromance with Brad Paisley), ESPN doesn’t have a viable option that doesn’t require years of waiting. Unlike CBS or Fox which each have a depth chart of analysts they can elevate or demote based on performance, ESPN just has one permanent NFL booth, which hampers their ability to develop talent. And while some analysts can step right in and at the very least be entertaining (as Tony Romo did last year), that’s not always the case.

While I do think the scorn for the new booth has been a bit overblown, I don’t think it’s a stretch to say the broadcast has struggled to replace Tirico, and now it’s really struggling to replace Gruden. Worse yet, people are taking notice, and it’s become one of the rare sports media topics that finds traction with a broader audience, which is the blessing and the curse of a property like Monday Night Football.

ESPN desperately doesn’t want negative chatter about MNF to snowball, but there’s no easy fix out there, unless they think getting rid of Booger’s crane is going to fix it. They’re in a tight spot here, and they might be stuck.