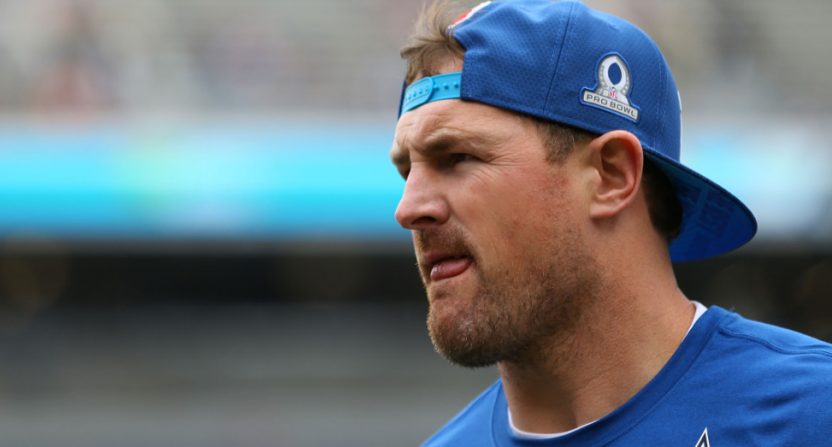 Money’s far from the sole determinant in broadcasting moves, but it can be a significant factor. Both Jay Cutler and Jon Gruden left the broadcasting world for more lucrative NFL contracts, and now we might be seeing the reverse, with Jason Witten’s rumored move from the Dallas Cowboys to ESPN coming with a reported more-than-doubling of what he can make with the Cowboys this year.

David Moore of The Dallas Morning News reports that the network is offering Witten a multi-year deal worth $4-4.5 million annually:

All signs point to the tight end ending his 15-year NFL career to become the lead analyst on ESPN’s Monday Night Football broadcast, multiple sources said. Club officials hold out hope that Witten will decide to stay but recognize this is a rare opportunity and a difficult decision.

The multi-year offer from ESPN would pay Witten in the neighborhood of $4 to $4.5 million a year, two sources with an understanding of the offer said. While the Pro Bowl tight end didn’t have his sights set on a career change when the season ended four months ago, the status of the job and magnitude of the offer is something he can’t ignore.

As Mike Florio notes at Pro Football Talk, the most Witten can make this year  if he stays in the NFL is $1.05 million in base salary and up to $750,000 in per-game roster bonuses. And while it’s not easy for any athlete to retire while they’re still playing at a high level, the chance to make over double the money for a job that involves much less physical punishment has to be tempting.

The timing here might also work out very well for Witten. It’s extremely rare for a former player to walk right into a top broadcasting job (yes, Tony Romo did that last year, but before that, the most recent such move might have come from Boomer Esiason back in 1998), and it’s rare for the main Monday Night Football analyst position to be open (Gruden held that gig from 2009 through this year). And the competition may be a little lower now than it’s been at other times, too, with both Peyton Manning and Greg Olsen turning down broadcasting roles this offseason; both of those figures, as well as many others, could potentially wind up in broadcasting down the road.

An interesting further note, from ESPN’s Chris Mortensen, is that another network is making Witten an offer too:

Jason Witten continues to contemplate his decision on retirement to join MNF broadcast team but a source says another network has made a last-minute "interesting" proposal that also is being considered. Announcement likely will be Wednesday. The @dallascowboys still hope he plays

Who might that other network be? Well, the money here is on Fox, which had some reported interest in Witten last month. It’s unclear exactly what his role at Fox would be; since being turned down by Peyton Manning, they’ve appeared set to have Joe Buck and Troy Aikman do double duty for Thursday Night Football, but it’s possible they could put Witten there with Buck or another play-by-play voice instead of giving Aikman the big raise he reportedly wants to do more games. (It’s also possible this is all being done as a leverage ploy to convince Aikman not to ask for too much.)

Witten could also slide into one of Fox’s Sunday announcing pairings, or potentially even a studio role, and he could possibly become one of the in-house NFL analysts who appear on FS1 studio programming during the week as well. And it makes more sense that this other network would be Fox than anyone else;  it seems reasonably unlikely that it’s NBC targeting Witten, as their broadcast and studio lineup seems relatively set and they only have one game a week now, but you never know. There’s maybe a possibility of it being CBS, as they have an extensive lineup of games and announcers, but the top pairing of Jim Nantz and Romo is set, and their studio is also pretty full, so it doesn’t seem too likely that they’d make Witten an offer that’s comparable to what ESPN is reportedly throwing in here.

So the most probable networks in play are ESPN and Fox. But, as Mortensen added, there’s still a chance Witten could turn all this down to keep playing. The Cowboys would particularly like that:

We’ll see what happens with Witten, but the financial details here are certainly important, and they gain credence to the idea that he will in fact leave the Cowboys. We’ve seen many of these moves made when one side made it very worth the while of the person in question, as with Cutler and Gruden. And in Gruden’s case in particular, a contract that trumped his broadcasting deal may have been key, as part of the reason for him not jumping at many of the past rumors may have been that most NFL coaching contracts provided little extra money and much less job security. It’s somewhat funny that the reverse could play out with Witten, with a broadcaster offering him much more than the NFL, but that perhaps speaks to the relative value that league places on tight ends as compared to coaches and quarterbacks. And with these kinds of numbers in play, it might make a lot of sense for him to make the jump to Monday Night Football.

Curt Schilling will be on the ballot in his final year of eligibility after all.

NFL Network will be in the basic Hulu+Live TV package. NFL RedZone will be in a new "Sports Add-On" package, costing $9.99 a month.

Curt Schilling will be on the ballot in his final year of eligibility after all.

NFL Network will be in the basic Hulu+Live TV package. NFL RedZone will be in a new "Sports Add-On" package, costing $9.99 a month.