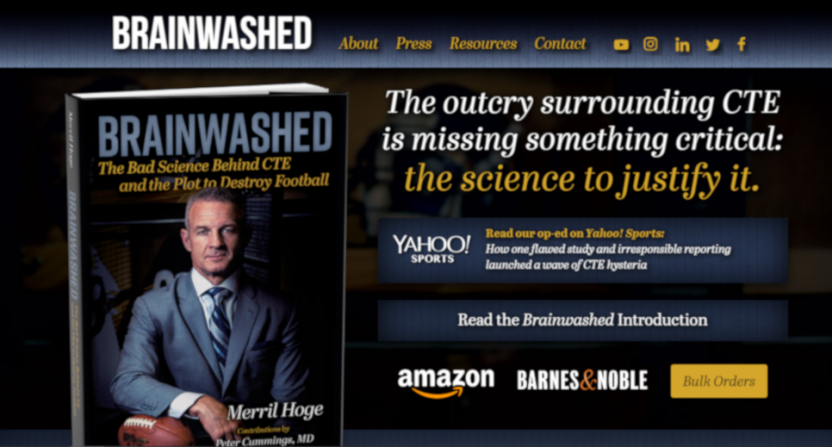 Since being laid off by ESPN in 2017, Merril Hoge has spent much of his time ranting about concussion research and the accompanying lawsuits against the NFL, including co-writing a book called Brainwashed: The Bad Science Behind CTE and the Plot to Destroy Football and claiming in a speech at a rally outside the Massachusetts State House that Boston University researchers “cheat, lie and suppress science.” Well, it turns out that Hoge has now filed a lawsuit of his own citing research linking harmful conditions to past experiences—but rather than being about football or concussions, he’s joined the crowds suing Monsanto over claims that exposure to weed-killer Roundup leads to cancer.

Merril Hoge, the former ESPN analyst and NFL running back, can describe vividly how chemotherapy can “literally scream through your veins . . . the burns, the hair loss, the fatigue of it all.”

He learned this firsthand while having treatment in 2003 for non-Hodgkin’s lymphoma, a disease he believes is linked to his exposure to the herbicide Roundup when he was a boy doing farmwork. Recently Hoge, as tens of thousands of people have done, filed a lawsuit against Monsanto, the company that makes Roundup.

Hoge, a 54-year-old native of Pocatello, Idaho, said he began using the product as an adolescent working at Shiozawa Farms in Idaho in 1977. Like more than 18,000 other plaintiffs who have filed lawsuits, he claims in his complaint, first filed in U.S. District Court in Idaho, that he has “incurred significant economic and noneconomic damages.” Hoge lives in Kentucky; his filing was sent to multidistrict litigation in northern California. Bayer AG, the parent company of Monsanto, has lost three Roundup-related cases since last summer.

Hoge’s Florida-based attorney, Joseph Osborne, told Jeff Papworth of The Idaho State Journal the lawsuit is “seeking coverage for pain and suffering for him both emotionally and physically“:

“We believe the dangerous product, Roundup, caused Mr. Hoge’s cancer,” Osborne said. “So we filed a lawsuit seeking coverage for pain and suffering for him both emotionally and physically, both in the past and future as well as any relevant economic damages we can claim.”

Osborne said another goal of the lawsuit is to bring awareness to the alleged dangers of Roundup. The attorney said Hoge is “trying to bring additional notice and attention to the fact that Roundup is still on the market, still being sold.”

…“He’s a very clean-living guy, obviously former athlete, doesn’t smoke, has no history of cancer in his family and we’ve been unable to point to anything as the cause of his non-Hodgkin’s Lymphoma, except for his long history of Roundup exposure,” Osborne said about Hoge.

How this will go for Hoge is far from certain. The federal Environmental Protection Agency still classifies glyphosate (the active ingredient in Roundup) as  “not likely to be carcinogenic to humans,” as do many international regulatory bodies (160 have looked at it, with only the World Health Organization’s International Agency for Research on Cancer (IARC), classifying it as “probably carcinogenic to humans”). But there is some research suggesting there is a link, with a University of Washington study published in April finding that “exposure to glyphosate — the world’s most widely used, broad-spectrum herbicide — increases the risk of some cancers by more than 40 percent,” particularly citing non-Hodgkin’s lymphoma (which is what Hoge has battled). And juries in California have granted a total of $2.2 billion in awards across the three Roundup cases that have gone to trial so far, and while judges have reduced those awards to fall within constitutional limits, they haven’t overwritten them. Bayer still has appeals in the works on those cases, though, and there are still further trials pending.

It’s understandable why Hoge is suing here; he certainly experienced cancer, he certainly used Roundup, and juries have agreed with the cancer survivors suing and claiming links so far. Maybe he’ll find similar success. And perhaps the regulatory authorities who have deemed Roundup to be safe are wrong; science changes with new information, and many things not once seen as major health concerns have been substantively linked to health issues, from tobacco use to head trauma in sports. But it’s interesting to see Hoge, one of the very few people still shouting that football doesn’t cause chronic traumatic encephalopathy (despite the NFL itself admitting links) and that the research and stories suggesting it does are all “a plot to destroy football,” now getting in on a different lawsuit about health hazards based on research that appears significantly less proven at this point. Apparently he’s fine with some research linking past activities to health issues, as long as it’s not a “plot to destroy football.”