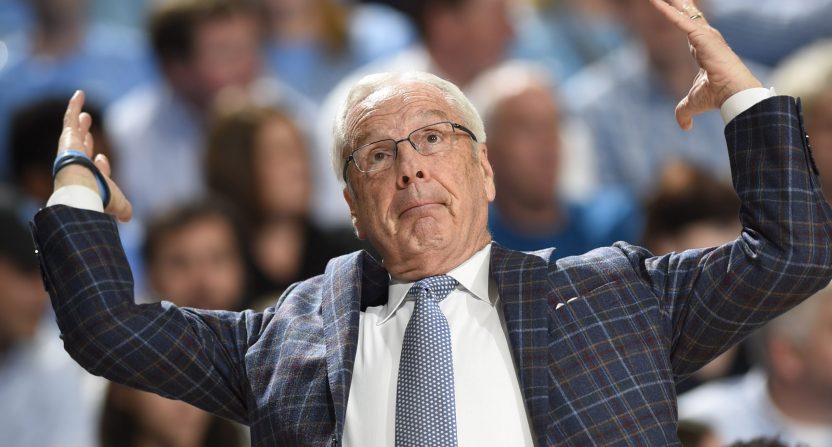 The Last Dance director Jason Hehir has done some notable interviews recently about that 10-part documentary on Michael Jordan and the 1997-98 Chicago Bulls, talking to AA’s Ben Koo about the process of releasing the film and what reactions have surprised him, speaking to Chad Finn of The Boston Globe about the “former Chicago resident” initial title card for former U.S. president Barack Obama, and talking with Dan Patrick about upcoming episodes 7 and 8 with “there’s language in there that I’m shocked ESPN let us keep in, and there’s behavior in there that I’m shocked Michael let us keep in.” Another significant appearance came on ESPN Radio’s The Will Cain Show Wednesday, where Hehir discussed Jordan’s laughter at the “Chicago Bulls’ travelling cocaine circus” line and more. But maybe the most interesting part of Hehir’s discussion with Cain starts around the 4:18 mark, where Cain asks about what’s the most notable interview that didn’t make the final cut, and Hehir responds with a great story about current UNC coach Roy Williams (seen above during a February game):

Cain says “When you have 10 hours to tell a story, I think a lot of people would be shocked by this, but I’m one hundred percent it’s true, so I feel comfortable asking you. There’s something you left out that you really wish you didn’t have to, there’s some story, you have a favorite story that didn’t make it, that got left on the cutting room floor. I know you do. What is it?”

Hehir responds “You know who was gold was Roy Williams. When you asked who was the most fun to interview, he’s right up there. Because he’s right out of central casting with that southern accent and this kind of avuncular old college coach. He was the guy who recruited Michael to UNC, so he knew the Jordan family really well, he knew the parents really well. And in the course of Michael’s recruitment to UNC, Michael’s dad built him a woodburning stove with his bare hands.”

After a discussion about James Jordan building the second story on the Jordan family house himself, illustrating what kind of a craftsman he was, Hehir gets back to the Williams story.

“Roy told the story of how Mr. Jordan shows up with this wood stove on a truck. Out of nowhere, rings his doorbell. And this is in the process of Michael being recruited. It’s one thing for a coach to be giving you something, but for the recruit to be giving a coach something, that’s just how generous a guy James was, and how much he appreciated how kind Roy Williams was. And Roy was a part-time coach at that point, I think he was earning like $8,000 a year to be a coach at UNC.”

“So James Jordan shows up and he’s got this huge wood stove on this truck. He says (to Williams) ‘I need your help to get it inside your house.’ Roy says ‘I can’t accept that, I’m sure this violates some sort of rule.’ And Mr. Jordan said, ‘Listen, it took me a lot of time to build this thing, it took me a lot of time to get it on the truck and drive it all the way out to your house. I’m going to be really upset if you make me drive back to this house with this stove that I built for you.’ So the next thing you know, they’re installing it in the house.”

“And Roy Williams, years later, he’s selling his house. And one of the potential buyers is coming through and says ‘That’s a beautiful stove. Is that a Fisher?’ And Roy says ‘No, that’s a Jordan.'”

That’s a great story. And while it’s unfortunate that it couldn’t be fit into The Last Dance, it’s also somewhat understandable; the documentary has had a pretty tight thematic focus for each of its episodes so far, and perhaps this didn’t really fit with any of those. But it’s cool to see Hehir tell this story elsewhere, and it helps illustrate the amount of interviews that went into this when even a 10-part, 10-hour documentary can’t include everything.