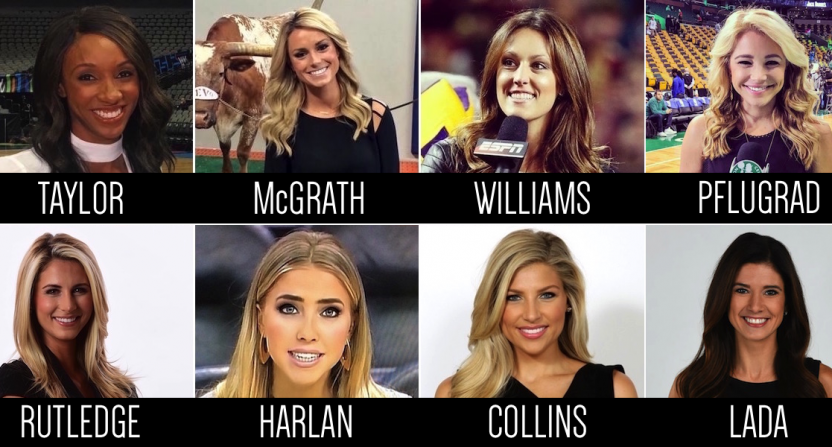 It was shocking enough when Sam Ponder left college football’s preeminent pregame show to host “Sunday NFL Countdown.” But then likely successor Kaylee Hartung left ESPN and the SEC Network for CNN just days later, throwing a monkey wrench into who will serve as a “GameDay” co-host and “Saturday Night Football” sideline reporter this fall.

We take a look at the candidates and assess the likelihood each ends up — in the words of Big & Rich — comin’ to your ci-tay.

ESPN is known for filling on-air roles internally, as it did by replacing Erin Andrews with Sam Ponder in 2012. As such, these women have the inside track on landing the open role.

@nellonwheels and I schemed all off season so we could join Coach Landers at the Final Four this season! #NellWeMadeIt

Taylor is the favorite to replace Ponder according to sources in the industry. About to turn 30, Taylor joined ESPN and the SEC Network in 2014 and is most prominently seen as a college basketball sideline reporter and the host of the SEC Network’s version of “GameDay,” “SEC Nation.” She is very experienced in both roles as a host and sideline reporter. Taylor would also add diversity to the show and be the most seamless transition out of all the candidates.

The 27-year old former Boston College cheerleading captain has been at ESPN less than a year but is already a top candidate as a lead college sports sideline reporter and co-host of “College Football Live.” She’s young, used to a crazy travel schedule, has lived-and-breathed college football and is a beautiful blonde like her predecessors, Ponder and Erin Andrews. That checks a lot of boxes.

Joining ESPN and the SEC Network in 2014, Rutledge can be seen on “SEC Nation” and as a sideline reporter for a variety of college sports. The 28-year old is former beauty pageant queen who was named Miss Florida 2012 — and let’s not kid ourselves and pretend that looks won’t play a factor in this decision. However, Rutledge doesn’t have much hosting experience and being married to another person with a crazy travel schedule — Boston Red Sox second baseman Josh Rutledge — would be extremely hard on the couple. Just ask Sam and Christian Ponder.

Not to be confused with the actress and Brian Williams’ daughter, Williams has been working for ESPN since 2011 and is one The Worldwide Leader’s most prominent college football and basketball sideline reporters. The 33-year old would be a logical choice that rewards her seniority at the network. But her dearth of work as a host has to concern the man making the decision, senior coordinating producer Lee Fitting.

Lada has been at ESPN for two years and refers to herself as a “utility player” given her numerous roles. She’s appeared on everything from “Baseball Tonight” to “College Football Live” to “Mike & Mike,” showing just how highly she is thought of in Bristol. She also did work for “GameDay” last fall as a contributor. However, the 2002 Marquette alum lacks sideline reporting experience and might prefer her current setup to the grind of “GameDay.”

Gonna be a good one tonight. Love a rematch! Covered Clemson for the last 3 years on ACC All Access, and did my first Bama game this fall. Let's goooo

Kevin Harlan’s daughter is extremely young, graduating from the University of Georgia in 2014. But her famous last name and good looks have already turned plenty of heads online. She’s already had her own GQ feature entitled, “The Next Big Sideline Reporter.” The main squeeze of the Houston Rockets’ Sam Dekker is currently a sideline reporter for the SEC Network and FOX Sports Southeast — where she covers the Atlanta Hawks. Landing such an incredible job three years after graduating college would be an absolutely meteoric rise.

It’s hard to believe ESPN would bring in an outsider to fill Ponder’s role on “GameDay” as the network lays off many other on-air personalities in the coming months to save money, but here are some other names to marinate on for fun.

CBS’ Allie LaForce is the most obvious non-ESPN candidate but she reportedly just re-upped with CBS, so now we’re thinking really outside the box. Collins has done a little bit of everything so far and currently works for The Golf Channel and as a CBS Sports college football sideline reporter. Her contract situation is unknown but when I tweeted about the possibility of her working on “GameDay,” she replied it was a “dream job.” The 2008 Penn State grad is a huge Nittany Lions fan and it doesn’t hurt that a Google search for her turns up endless modeling shots.

Doesn't get more exciting than this! Celtics vs. Cavs #EasternConferenceStandings

Remember her? Pflugrad (pronounced Flu-grad) became an Internet celebrity after the then-Oregon Ducks cheerleader was named Sports Illustrated’s “Cheerleader of the Week” in 2008. Currently a sideline reporter for the Boston Celtics, Pflugrad grew up in a football family — her father is a coach, her brother is a former college player — and she cheered for one of college football’s biggest powerhouses. If ESPN hires her, the sports blogosphere might collapse upon itself.

When you're speed talking because your producer is giving you a countdown but you just haaaaave to let People know Lavar Ball tried to play for the Jets. Big fan of Lonzo though…his dad is pure entertainment (glam by @therealmarissajade)

Rooks became a fixture on The Big Ten Network just months after graduating from the University of Illinois in 2014. Starting last August, she’s been a reporter and anchor for SportsNet New York and a CBS Sports college football sideline reporter. Rooks has an extremely bright future ahead of her but it’s hard to see her leaving the current gigs — both practically and contractually — less than a year into them.

Now we’re really having fun. Nolan, 30, doesn’t appear to have any passion for college football and has no previous sideline reporting experience. But she’s a huge name and with reports that ESPN is trying to lure her away from FOX Sports 1, this is the most prominent role Bristol’s brass could offer her outside of her own ESPN version of “Garbage Time.”

For the snowflakes. Hey it's okay, if you had fun, you won! See you at the inauguration of our 45th President of the United States: Donald J Trump. Xoxo #TeamTomi #snowflakes #❄️ #maga #participationtrophy

So we’re saying there’s a chance? Hell would have to freeze over before this happened. But Lahren, 24, is currently looking for a new job and her hiring would certainly be one way of ESPN changing its flaming-liberal reputation. We can just picture her first “Final Thoughts” on how college football players should stop being such snowflakes about concussions.