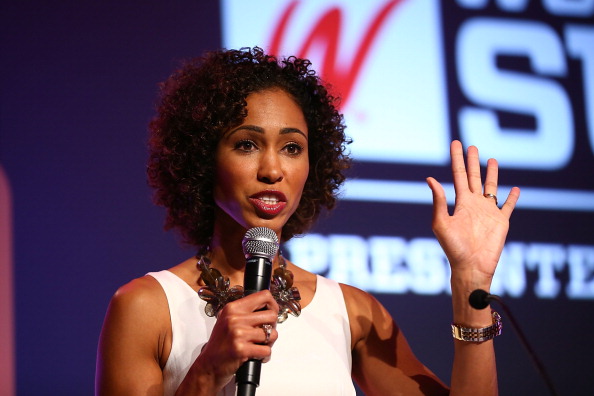 ESPN studio host Sage Steele has been the subject of much speculation recently when the network made the rare decision to do a midseason changeup with their NBA Countdown show. While Steele had been the main host for the Finals in past years, she was taken off NBA coverage and replaced full-time by Michelle Beadle.

With such a high-profile move happening so close to the start of the playoffs, speculation immediately turned to Steele’s future and whether she was being phased out of ESPN’s plans. Specifically, some of her political statements on social media (like complaining about travel ban protesters clogging up traffic at airports and about anthem kneelers) drew renewed scrutiny. In the wake of the story, Steele has also been the victim of abuse on social media.

However, ESPN has publicly renewed their commitment to Steele who has been a key part of ESPN’s SportsCenter on the Road presentation and has a role at The Masters this week.

ESPN president John Skipper spoke out in support of Sage Steele after the “SportsCenter” anchor was the victim of Twitter trolling earlier in the week.

“Sage has done a wonderful job for us in a number of important roles. As previously announced, her ‘SportsCenter’ presence has grown and this week alone she has led our coverage from the men’s Final Four and the Masters,” Skipper said in a statement to TheWrap on Thursday.

“Sage definitively has a bright and long-term future at ESPN and my complete support,” he added.

It was always curious why there was such an uproar about the Beadle-Steele move. While the midseason swap is strange, it was obvious Steele’s job at ESPN wasn’t in any kind of jeopardy. If you’re looking to quietly push someone out, you don’t give them an assignment at The Masters of all places.

In all honesty, the speculation that Steele might lose her job at ESPN came entirely out of the heightened political climate we live in. In fact, this whole story all revolves around politics, nothing Steele has said or done on air or the quality of work she does there. From her initial comments to the outrage against her (that has spilled over into some ugly abuse on social media) to the speculation about her job to John Skipper’s public statement, all of it has been fueled by our current polarization.

Additionally, for ESPN to feel the need to publicly stand behind Steele is a sign that the network might be worried about their growing left-leaning perception. A lot of what Steele says is sympathetic to more conservative-minded people and if ESPN were to actually go through with trying to marginalize Steele’s presence, it would send off mega alarm bells on the right. With the uber-politicization of the sports media, this cycle is going to become the norm with sports media personalities who speak out.

Yes, Steele might have said some controversial things and some things you or I don’t agree with, but she’s not getting fired or pushed to the side. Skipper’s statement might as well have been a plea with everyone worked up into a frenzy on both sides to take a deep breath and try to co-exist for just a few moments.