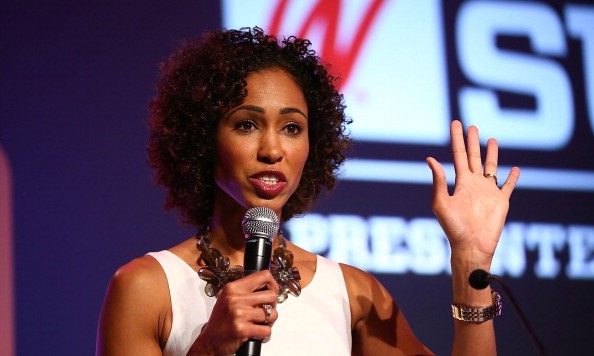 The NBA Countdown host shared a picture of the protests underway at LAX. Steele wrote while she “loves witnessing” people exercising their right to protest, she was “saddened” knowing the protests disrupted people’s travel plans, including immigrants.

So THIS is why thousands of us dragged luggage nearly 2 miles to get to LAX, but still missed our flights. Fortunately, a 7 hour wait for the next flight to Houston won’t affect me that much, but my heart sank for the elderly and parents with small children who did their best to walk all that way but had no chance of making their flights. I love witnessing people exercise their right to protest! But it saddened me to see the joy on their faces knowing that they were successful in disrupting so many people’s travel plans. Yes, immigrants were affected by this as well. Brilliant. 🇺🇸

With the protests entire point being supposed to be sending a message, Steele was called out for missing the purpose.

@sagesteele As a volunteer attorney who helped reunite a family this past weekend your comments are stunning. Some things are bigger than u.

@sagesteele hey Sage..w/ all due respect..what types of protest do you prefer? The 'disruption' is the point of protest.

Steele offered a vague response calling out the process of protest, while not offering her own preferred solution.

@TaylorRooks has nothing to do w what I "prefer". Comical to see the process used to determine when it's "ok" to disrupt. It wasn't…

I understand the inconvenience of missing a flight etc, but why people are protesting -for inhumane regulations- is much bigger than that. https://t.co/mG5ZcMXPZ6

Steele suggested those criticizing her post need to re-read it.

@DuncanSmithNBA deep breaths, Duncan…deep breaths. And then re-read the entire post without bias. Or not.

It’s not great passengers like Steele will have their trips delayed or miss flights due to the protest – but, their flight delays pale in comparison to what’s going on around the world. The EO and protests are much bigger than the small inconvenience. I get what she’s trying to say, but her tone probably doesn’t help her argument.

Steele’s heart appears to be in the right place with the comments, but she’s missing the point.