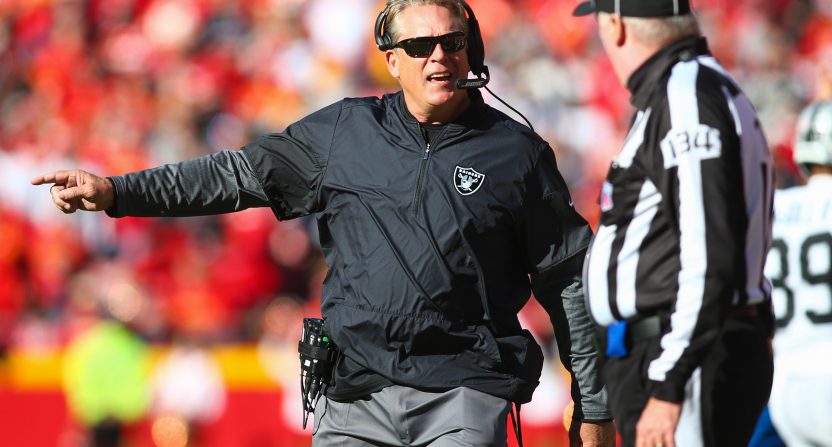 I know what you’re thinking… the one thing ESPN really needs is another former player or coach to join the network as an analyst. Well you are just in luck! No more cold sweats at night or way-too-long tweet threads about how empty the network will be of football talking heads this fall.

ESPN has reached into the well of ex-NFLers to pull out former Jaguars and Raiders head coach Jack Del Rio to join the network as a studio analyst. Del Rio will appear on a number of different platforms throughout the week including NFL Live, SportsCenter, and ESPN Radio and will make his ESPN debut on Friday.

Jack Del Rio, the former Jacksonville Jaguars and Oakland Raiders head coach who has spent more than three decades in the National Football League as a coach and player, is joining ESPN as an NFL analyst. He will appear on NFL Live, SportsCenter, ESPN Radio and more throughout the year, beginning Friday, Aug. 16, when he makes his debut.

“I’ve visited several training camps over the last few weeks, and I’m really looking forward to the upcoming football season and my new role with ESPN!” said Del Rio, who made an ESPN guest analyst appearance in March.

Adds Seth Markman, ESPN vice president, NFL and college studio shows: “Jack was highly successful as a player and coach. He sees the game from both perspectives, and he doesn’t shy away from sharing his honest opinion. He will be a great addition to our ESPN team.”

It’s always impossible to tell who has star potential and who will end up being an afterthought when it comes to the neverending revolving door of NFL analysts on television. Who would have thought Ray Lewis would be a bust while Dan “run out of the back of the endzone” Orlovsky would wind up being one of the most entertaining and insightful minds on television?

Del Rio was known for being fairly blunt in his time as a coach, so maybe he can bring a refreshing straight-talk approach to the analyst game and at least provide some perspective as a longtime former player and coach in the league. (He hasn’t shied away from that attitude in his post-coaching days either.)

Del Rio’s stay sounds like it may not be long, though. He told the AP, “I haven’t said I am done coaching. This allows me to still talk about and cover the game while reviewing game tape and providing an opinion.” If Del Rio does return to coaching and his tenure at ESPN is just a pit stop, here’s hoping he at least doesn’t wait as long as Jon Gruden did.