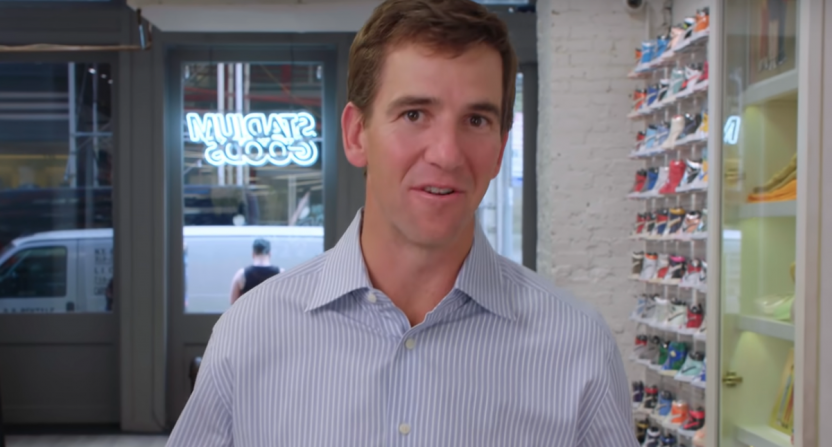 ESPN’s Monday Night Football “ManningCast” has become must-watch TV for football fans both diehard and casual. But Week 8’s edition, featuring the New York Giants at the Kansas City Chiefs, could be even more intriguing with Eli Manning calling a game involving his former team for the first time.

Will Eli be critical of the Giants, particularly the play of quarterback Daniel Jones or the play-calling of offensive coordinator Jason Garrett, if necessary? Other than making fun of his big brother’s sweat and forehead, he hasn’t been on the attack in the previous ManningCasts. (Well, except maybe with wide receivers, who he said should never fall down on a route.) But both Eli and Peyton Manning have frowned or thrown up their hands when neither has agreed with a decision.

Yet Eli acknowledged to the New York Post‘s Andrew Marchand that he doesn’t have to be objective on the ManningCast. He can be a Giants fan. And really, that’s what viewers prefer.

“In most cases, broadcasters can’t show any alliance to a team,” Manning told Marchand for his weekly Sports Clicker newsletter (subscribe here). “I don’t think I’m going to take that same approach. I am a Giants fan. I’m a season-ticket holder. This is my team and who I root for.”

Most importantly, Eli has shown a willingness to be goofy and make fun of himself, as seen in what might be the most memorable ManningCast moment so far: Doing the Dak Prescott hips warm-up and comparing himself to Shakira.

He also showed that he definitely isn’t a polished, reserved broadcaster when he flipped two middle fingers to the camera, perhaps forgetting that shouldn’t be done on live, prime-time television. (Or maybe he knew exactly what he was doing because so many talked about it when it happened and the day afterward.)

Manning also showed just how smooth and comfortable he is in front of the camera nowadays for an episode of Complex’s “Sneaker Shopping” series in which celebrities talk about favorite sneakers from their past and what they prefer to wear now before picking out some new shoes from the glorious inventory at New York City’s Stadium Goods.

He even joked about making an impact in broadcasting since retiring from football.

“Life outside football hasn’t been much different. I love it here!” said Eli in the video’s introduction. “It’s like I’m the captain here. Everybody listens to what I say and we all get along great.”

Eli explained to Marchand that he didn’t want to go into broadcasting after football, largely because he didn’t want to give up the family time he now had with his playing days finished. But hosting Eli’s Places for ESPN+ (and Peyton’s Omaha Productions) showed him the appeal of media life and got him comfortable on camera.

There’s more on this story in Marchand’s newsletter, including what Peyton originally had in mind for the ManningCast and how the Manning family nearly got into broadcasting a generation earlier.