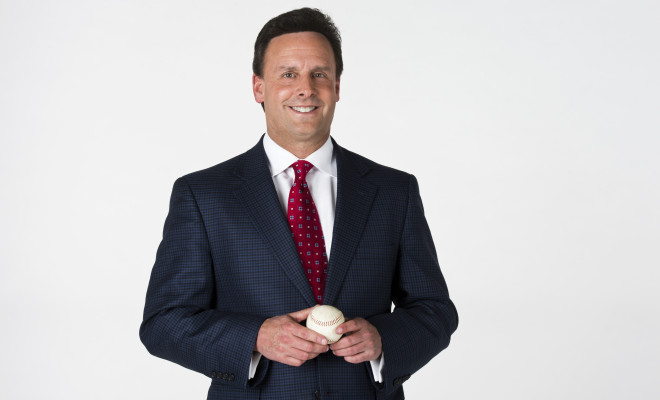 On Sunday afternoon, Karl Ravech went through airport security in Connecticut while on his way to Washington D.C., where he’ll call Monday night’s Home Run Derby on ESPN alongside Mark Teixeira, Jessica Mendoza, and Buster Olney. It’ll be the second year Ravech will call the Derby after longtime play-by-play man Chris Berman stepped away from the role.

While waiting for his flight to take off, Ravech spoke with Awful Announcing about the Derby and its significance, the current state of Baseball Tonight— which he’s hosted for 23 years— his 25 years at ESPN and how he envisions his future at the company.

“I think it’s an exciting, fun event, different from what you get every night in baseball,” Ravech told Awful Announcing about the Home Run Derby. Last year’s iteration headlined by Aaron Judge— the first called by Ravech— was the highest-rated Derby since 2009, and up 36 percent from 2016.

Needless to say, Ravech’s approach to calling the Derby was and is different from Berman’s. Ravech prefers “to be a little bit more conversational and let the event itself warrant people’s viewing, as opposed to me being the reason that they’re watching.”

The Derby was first televised in 1985, but Ravech remembers when he was 12 and 13 years old at summer camp in Amesbury, Mass., getting to stay up, eat pizza, and watch the All-Star Game.

“I never paid much attention to who was broadcasting it,” Ravech said. “I was far more interested in seeing the player with the Boston over his chest. In the case of a Home Run Derby, I look at it as these viewers are tuning in to watch these guys do things that very few other can do.”

“We’re there to complement the actual event,” Ravech said. “That would be the way I’d go about everything I do.”

Ravech has always played what he called the straight man over his 25 years at ESPN, beginning with overnight SportsCenters with comedian and would-be late night TV host Craig Kilborn.

“That role, in my opinion, served me really, really well,” he said.

For nearly his entire tenure at the network, his main role has been as Baseball Tonight’s primary host. And despite the show having been cut back to just one night per week, and special occasions like All-Star week, Ravech said that “the group that works on the program, both in front of and behind the camera, collectively are the best group that we’ve ever had there.”

Ravech praised his co-hosts, Teixeira, David Ross, and Tim Kurkjian, who said that they could easily go the managerial or front office route taken by former ESPN analysts Aaron Boone and Alex Cora.

“They all bring such unique talents to the set and such interesting conversation, current conversation,” Ravech said.

Ravech’s role has expanded in recent years to include college basketball and NBA play-by-play as well as broadcasting duties in both college baseball and the Little League World Series. He’s made it a goal to try other things at ESPN, “and ESPN has been incredibly receptive to that.”

In looking back on the 25 years he’s spent at ESPN, Ravech said he thinks about sports fans who have grown up with ESPN as a part of their lives. That includes Ravech’s son Sam, who’s gone on to have a sports broadcasting career of his own. While he didn’t expect to be at ESPN this long, he was never much of a high-key job hunter as others in the industry are.

“I worked with a lot of people who have spent a lot of time trying to find the next job, trying to move out of a particular television market. I’m being very candid. I’ve never had a road map to ESPN or from ESPN,” Ravech said. “At ESPN, it has never been a desire to move to another place.”

Ravech said that at this point, he’d do whatever the company asked him to do, if there came a point where he’d have to take on a different role within the network. But if there was one role Ravech could take on that he hasn’t performed yet at ESPN, it would be calling college football, something he did as an undergrad at Ithaca College in upstate New York.

“I think play-by-play guys, for the most part, have the ability to move from sport to sport,” Ravech said, “especially if you’ve played it at any level or if you grew up watching it and have a great understanding of how it works and most importantly, you defer to the people sitting next to you.”

Doing that’s served him really well over his 25 years at ESPN.

“My goal is to mine the oil from the experts,” he said, while trying to anticipate what the fans want to hear from the analysts. And that role he’s taken on for the network he’s spent nearly half his life at is something he wouldn’t give up for anything.

“I look at the role I have at ESPN as the greatest role at ESPN,” Ravech said. “I don’t think there’s a better role or job than the one that I have and the responsibilities in play-by-play and studio stuff that I do. I really don’t.”