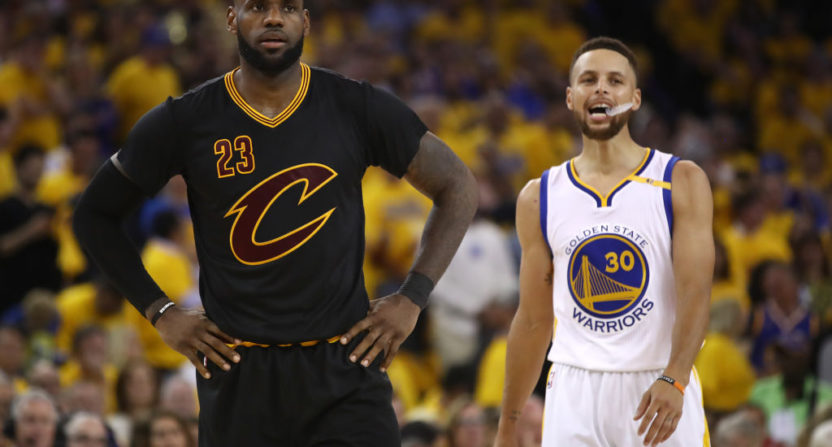 Summer is upon us. It’s the sports slow season. With a demanding 24/7 media cycle, the traffic hamster wheels don’t spin themselves. It’s time, not so much for reflection, but for finding things to discuss. We’re about to have some tired debate topics embraced and beaten into the ground.

Some topics have been around forever (or at least as far back as the collective memory extends). Some are well-worn flashpoints on social media. All have a common element: there is nothing productive or novel to say about them. But, since there’s little sports news we’ll be stuck discussing them anyway.

Here are the five worst sports media topics for Summer 2017.

Golden State did not blow a 3-1 lead. The Cleveland Cavaliers lost. The “Kevin Durant finally won his ring” story does not resonate far beyond Kevin Durant. Discussion, as it is wont to do, will shift back to social media lightning rod LeBron James and his legacy. One particular writer built a lucrative career on hitting LeBron early, often, and without mercy or reason.

Here’s the thing. We know what LeBron is. He’s a remarkable combination of athleticism, basketball IQ, and well-grounded personality. He’s a three-time NBA champion. He’s a four-time league MVP. He’s a three-time NBA Finals MVP. He has reached the NBA Finals for seven-straight years. In the Series he will be ripped for, the 14-year veteran averaged 34 points, 12 rebounds, and 10 assists playing 40-plus minutes per game. But, really, that inveterate loser could have led a bit more.

The excruciating 2016-17 NBA season only could be the result of the basketball gods’ fury. They gave us a player with Magic’s vision, Michael’s aerial nous, and Karl Malone’s strength. They blessed him with good health. Instead of marveling at him, we spent a decade-plus trying to shoehorn him into historical context.

ESPN’s business model is in trouble. The network cut costs with notable layoffs. The prime culprit, as has been well documented, has been losing millions of cable subscribers paying $8 or so per month.

In a tangentially related story, ESPN may be losing conservative viewers over perceived liberal bias and prominent social stands. It’s hard to parse out whether that is happening or how significant it is. But, the cause has been taken up by conservative media and acolytes.

The topic is relevant. Whatever happens to ESPN affects the rest of the industry. But, the polarizing debate surrounding it will be neither. Talking points have become entrenched. The facts don’t matter. Forget convincing each other. The other person, expounding for a parallel conversation, isn’t even listening. There’s no reaching a consensus. Serious discussion is fruitless.

Colin Kaepernick remains unaffiliated with an NFL team. Kaepernick hurt his free agency standing with his flag protest, whatever one’s feelings about it. NFL teams don’t like distractions. He became one. Some will see collusion there.

The other side of it is there are football reasons Colin Kaepernick remains a free agent. He has not quite been good enough for teams to view him as a starter. He’s not an ideal backup quarterback. He needs a system tailored for his skill-set vs. the other way around. He has less potential value than a young quarterback on a rookie deal with upside. There weren’t that many opportunities that fit for him. His best bet is probably a team having an established starter get hurt.

Strong opinions have been rampant on this and have solidified. All opinions express the personal politics of the beholder far more than they have expository value.

The Face of Baseball

MLB is the only major sport happening. It’s a hard one for sports shows to address. Baseball is an analytics game. Math talk does not engage a general audience. When debate must be embraced about baseball, it’s unlikely to be about the play on the field. Things will get dire around the All-Star Break. The “Face of Baseball” discussion will come up.

Short answer: there isn’t one. It would render the topic redundant. We can go at it about David Ortiz or Derek Jeter. Bryce Harper probably has the best name recognition. But, there hasn’t been a “face of baseball” since the late 1990s when the sports faces, Mark McGwire and Sammy Sosa, were pounding PED-fueled dingers to pass Roger Maris.

Baseball doesn’t have the same cultural resonance it did in the 1950s. It’s no longer an individual star forum like the NBA. The best way to consider baseball is local. The “face of baseball” is the most famous player on whatever your favorite team is. Detroit? Your face is Miguel Cabrera or Justin Verlander.

Many fascinating discussions can emerge from baseball and culture. The “face of baseball” isn’t one of them. It’s a vacant concept that has gained credibility through repetition.

The most recognizable face in baseball is playing in Single-A ball for the Columbia Fireflies. Tebow is no longer polarizing. The Tebow phenomenon is not that hard to figure out. Many religious people, who aren’t necessarily sports fan otherwise, are Tim Tebow fans. What moves meters is Tebow positivity.

A great athlete can get to a certain level in baseball on elite athleticism, hitting .200 give or take in the minors. But, Tebow developed refined skill and consistency for college football, not baseball. He’s struggling where Michael Jordan did, developing productive power. He’s 6’3″ 255 and can’t drive the ball consistently.

There’s no serious disagreement. But, taking the positive counter-narrative that Tebow is a lovely, motivated person and one shouldn’t put anything past him plays very well with his audience. It also adds in some mild trolling.

Has the discussion died down? Just wait. He’ll hit a home run again at some point. The Mets are also moving toward being so off the pace in the NL East they could consider calling him up as a publicity stunt (or people could debate them doing so).