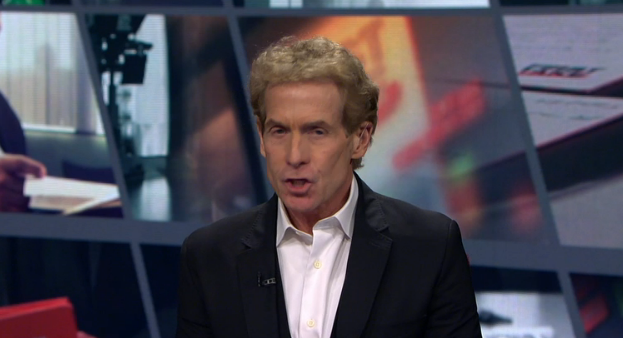 The worst kept secret in sports media is finally out of the bag.  After being reported, rumored, and known for months – Skip Bayless was officially unveiled as the newest ex-ESPN hire by Fox Sports on August 1st.  Bayless joins a growing list of former Bristol talking heads to make the move west to Los Angeles, joining the likes of Colin Cowherd and Jason Whitlock.

The Hollywood Reporter got the privilege from Fox Sports PR to announce the news officially and the piece provides some interesting quotes and details considering it’s the best publicity the controversial hire is probably going to get.

First, the biggest headline is that Bayless will be hosting a new show on FS1 from 10-12 AM ET, in direct competition with his old show First Take.  THR doesn’t name Bayless’ co-host but indirectly acknowledges Shannon Sharpe’s name has been mentioned as Skip’s new debate partner.  And wouldn’t you know, that’s what Awful Announcing reported last month!

In a strange twist, Bayless called out his former employer to some extent by saying that executives at ESPN were too “fearful” for his liking.  At FS1, Bayless promises takes that are even hotter.  We’re not talking just volcanic hot takes here America, we’re talking flying-directly-into-the-sun hot takes.

“Too many people in charge at ESPN, for my taste, were a little too fearful,” Bayless tells The Hollywood Reporter in an interview officially revealing his move. “It’s a Disney network. There are just certain boundaries that you can’t even tiptoe along. Not that we won’t have boundaries at Fox because we will. [But] they will trust me to go a little deeper. I can be completely honest on everything.”

“I’m not suggesting I’m going to become some sort of shock jock because that’s not me,” he adds. “I say what I say because I believe it from the bottom of my soul and I can back it up. Now I feel like I can be completely honest heart-and-soul with full support from the people above me.”

The self-awareness of Skip Bayless is truly staggering.

Given how loose FS1 has been with some of the incendiary things said by its stable of provocateurs, Bayless will love the free reign given to him by Fox Sports.  He will also love the $6 million yearly salary FS1 is paying him to go on television and yell about sports.

It’s an odd critique of his old employer by Bayless given that ESPN basically allowed him to run the network for years as a front-facing talent and constantly showed Bayless preferential treatment when others were suspended or disciplined for similar behavior.

In the THR piece, Bayless spoke openly about challenging First Take and working with the Emperor Palpatine of Embrace Debate in Jamie Horowitz, who has brought many of his former ESPN proteges with him to FS1.

Bayless will need all the help he can get at FS1 in the competition with First Take.  On the other occasions that FS1 tried to go head-to-head with ESPN, it has been a blowout of epic proportions.  Fox Sports Live is now in its third incarnation in a futile attempt to overtake SportsCenter and the Erin Andrews hosted Fox College Saturday lasted one year going up against College GameDay and getting trounced 25-1 in ratings before being taken off the FS1 calendar.

Can Bayless do what no other talking head has done and topple ESPN?  It’s unlikely.  Cowherd and Whitlock are drawing a whopping 60,000 viewers per night going up against the 6 PM ET SportsCenter.  If Bayless can lift this new FS1 show to over 100,000 viewers and at least within shouting distance of First Take’s audience it would be a fairly large upset.  Is a few thousand extra viewers enough to justify $6 million a year and the distaste for the network’s Embrace Debate 2.0 mantra?  Apparently Fox Sports thinks so.