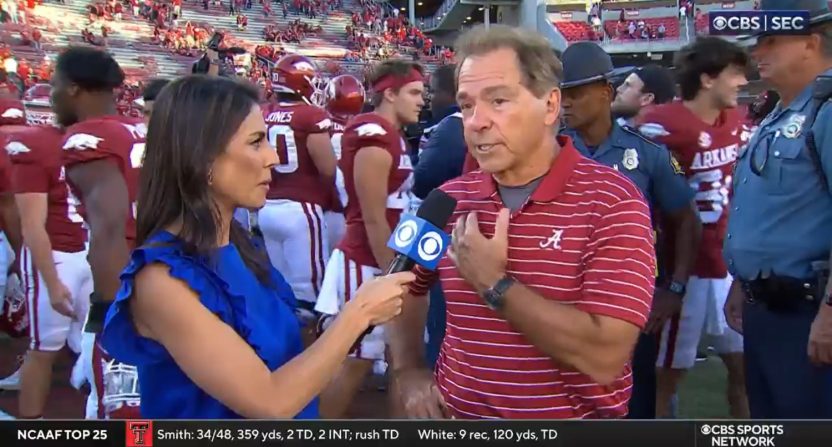 Nick Saban does not tend to get along well with the media. But things might go a lot smoother if Alabama’s head football coach would listen before making assumptions.

Crimson Tide quarterback Bryce Young injured his shoulder during the first half of Alabama’s 49-26 win over Arkansas Saturday. During Saban’s on-field postgame interview, SEC on CBS sideline reporter Jenny Dell asked the Alabama head coach to comment on his team’s resiliency. Instead, Saban got snippy over a question that wasn’t even asked.

“Your Heisman Trophy winner Bryce Young goes down and the rest of the team steps up,” Dell said. “What’d you learn about the resilience of this squad tonight?”

Maybe Saban couldn’t hear the question. Or maybe Saban just arrived to his postgame interview hellbent on scolding the media and assuming Dell’s line of questioning was going to be about Young. Either way, his response to the question created an awkward exchange.

reporter: “talk to me about your team’s resiliency today”

Saban: *ignores question about the team*

Saban: “how dare you not ask me about our team on a day like today”

always mad at the media about somethingpic.twitter.com/xrsIuoi6kY

“You know, what I’d like to talk about is our team,” Saban said. “Our team just won a game on the road—wasn’t pretty all the time, but they made plays when they had to make ’em. We love Bryce. Bryce has got a sprained shoulder. You know, hopefully, we’ll get some diagnosis on him and see how he goes. But what about the game? What about the team? What about the players that played the game?”

This is pretty on brand for Saban. Like Bill Belichick and Gregg Popovich, Saban often has his petulance with the media excused. Last year, longtime sideline reporter Erin Andrews even admitted on the Pat McAfee Show that she was intimidated by Saban earlier in her career.

“I mean, listen when I first interviewed Nick Saban, I used to be at arm’s length from him because I was so intimidated,” Andrews said. “I was so scared, I didn’t want to piss him off.”

Credit Dell for handling Saturday’s awkward exchange with professionalism despite Saban’s irritability. As soon as Saban heard the words “Bryce Young,” it seemed like he just stopped listening as the renowned football coach went off on Dell for not asking about “the team.” Even though that’s exactly what she asked about.