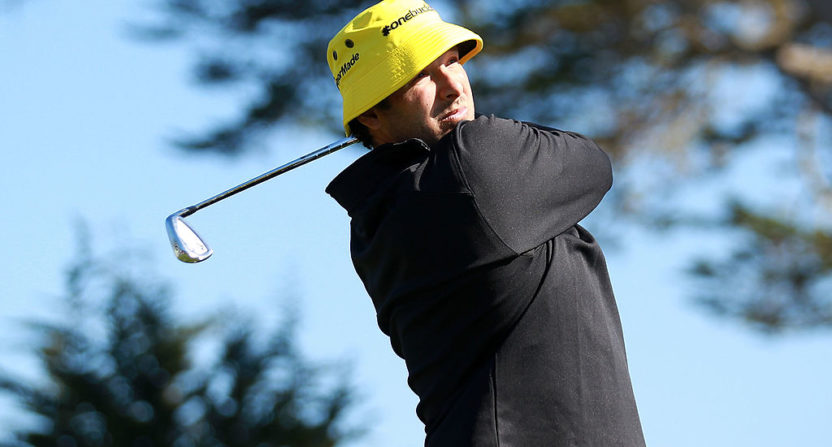 With Tony Romo leaving the Dallas Cowboys to head to CBS as their new A-team NFL color commentator, there’s been a fair bit of discussion about if he might have a role on the network’s golf coverage as well. Romo is an avid golfer (he entered the U.S. Open qualifiers this year), and he’s long expressed an interest in covering the sport. Now, it seems he’ll be briefly featured on CBS’ coverage of the Dean and DeLuca Invitational from Fort Worth’s Colonial Country Club this weekend. That tidbit was leaked by CBS producer Lance Barrow (previously the coordinating producer of the overall NFL on CBS, now focusing on his role as lead producer of their golf coverage) at the pre-tournament Ben Hogan Award (top male amateur golfer) ceremony Monday night, as Clarence Hill Jr. of the Fort Worth Star-Telegram reports:

Barrow, the guest speaker at the black tie gala at the Colonial Country Club, said that Romo will make his CBS debut when he’ll join the broadcast booth at the 18th hole during coverage of the Dean & Deluca Invitational this weekend.

“It will be the first time he will wear a blazer and he will be introduced as our newest addition to CBS Sports,” Barrow said while swearing the audience to secrecy.

This was going to get out, though, as Barrow’s remarks were being Periscoped by the Ben Hogan Award Twitter account. You can see them below, and they include some very high praise for Romo as well. The key part about Romo comes around 11:20, with master of ceremonies Brian Estridge saying to Barrow “Tell us about the latest addition to CBS Sports, Tony Romo. Tell us about how you see this unfolding.”

“I’m going to be frank; Tony Romo’s been on our radar for a long time. There have been a few announcers at other networks who spoke very highly of Tony. He has a lot of energy, a big personality, wants to do it. He’s the first guy in the history of any sport who’s gone right from the field to the booth as a #1 announcer (note: this doesn’t seem strictly true even just in football, as Boomer Esiason went from playing in 1997 to being part of a three-man Monday Night Football booth in 1998; you could argue that it’s harder being the sole analyst, but field-to-top-broadcasting-job has been done), even John Madden didn’t do that, he was doing other games for about two to three years (Madden also went into broadcasting with CBS the year after he retired, but wasn’t in a top role for his first two seasons).”

“He has a great partner in Jim Nantz, the best in the business. I think he will do great. But only time will tell; a lot of athletes think they can do TV because they talk well, they have a good personality, until I’m talking to them in their ear, Jim Nantz is talking to them in their ear, and they have to cut down what they usually say in two minutes to about five seconds. Like I always said, John Madden, there will probably never be another John Madden in our lifetime, there will not be another David Feherty in our lifetime, because John Madden can make Gatorade buckets seem interesting by doing the telestrator. David Feherty, somehow, maybe because of the accident, could get it across differently than most people. Gary McCord is the same way. But Tony will get that chance.”

“I was at a function that made a lot of news today, shockingly, that Romo was DJing last night. Matt and Lisa Rose, Matt’s the chairman of Burlington Northern, had myself and Tony Romo and Jordan, Ezekiel Elliott, Coach (Gary) Patterson was there, performing and trying to raise money for a better women’s house, and Romo was the DJ, and it was all over the news this morning, national news, Tony Romo DJing. And it was amazing to see his personality in a setting that wasn’t football.”

“So I think we have the next John Madden on our hands, I really do. Of course, a lot of people are going to hate him because he was a Cowboys’ quarterback, but a lot of people are going to like him because he’s that way. I think he will do great. Obviously having the great Jim Nantz sitting next to him will be something. And I will give you a little note; this weekend, for the first time ever, he will be in the announce booth at 18 for a few moments, and it will be the first time that he will have the CBS Sports blazer on and he will be introduced as our newest addition at CBS Sports right here at Colonial.”

So, by itself, this isn’t going to be a full foray into golf broadcasting for Romo, but rather a chance for CBS to promote him and their NFL coverage during a golf tournament. And the comments about Romo as the next Madden may be even more notable, considering the high praise Barrow had for Madden there and how he worked with him and Pat Summerall for a long time. But there has been a lot of talk about Romo calling golf in a larger role before, with some reporters speculating that was part of why he chose CBS over Fox (granted, A-team at CBS over B-team at Fox was likely even a larger reason, but still):

The CBS job was the most attractive to Tony Romo — being in the No. 1 booth and doing golf. In his mind, not a tough call.

Wish Tony Romo the best. Loves golf. Once asked him what he wanted to do post-football: "Cover golf and the NFL for Sports Illustrated."

Rapoport even told Golf Digest “I believe it’s going to happen, maybe not right away, but it’s definitely in his future.” We’ll see if that proves true. But for now, we know that Romo will get at least a few moments on a CBS golf set this weekend.