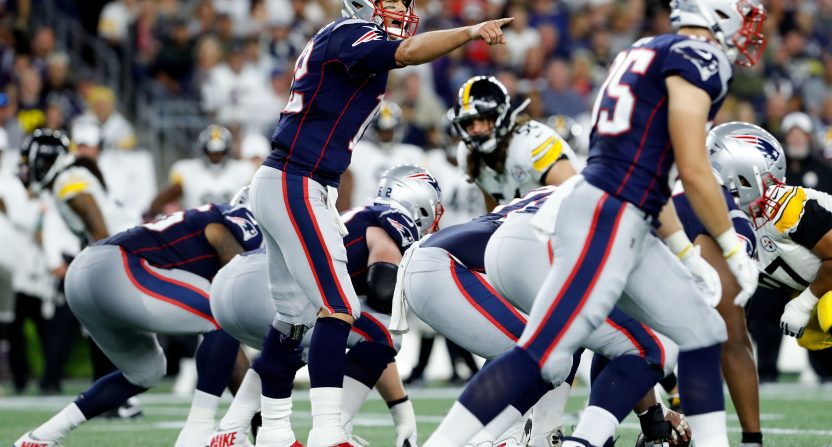 Those expecting a big national ratings story coming out of Week 1 of the NFL season will be disappointed, because the overall takeaway from Week 1 is a giant shrug.

Starting with the positive, Sunday Night Football was up 3% (Bears-Packers) for the Patriots’ demolition of the Steelers, drawing a 14.8 overnight.

📈 AGOTW is projected to be FOX's most-watched telecast of any kind since the 2019 NFC Championship Game.

The early windows for Fox and CBS were a different story, however. Per Sports Media Watch, the early window on CBS was down 4% to a 10.2 overnight with a schedule highlighted by a pair of noncompetitive games, Titans-Browns and Chiefs-Jaguars. The good news for CBS is that the window was up 19% from 2017, and that you can attribute the drop from 2018 to the fact that CBS had both the Patriots and Steelers featured a year ago. Without those two teams, a drop seemed inevitable.

Fox was also down in the early window, dropping 2% from 2018 and rising 2% from 2017. The window was close to evenly split this year between Redskins-Eagles, Rams-Panthers, and Vikings-Falcons.

When you look at all of these numbers, along with the increase for Thursday’s Kickoff game, you figure the NFL can’t be feeling all that bad with the start of the season. The drops were minimal and can be rationally explained, and while most of the gains were also somewhat low, any time you can use the word “rises” when talking about ratings is a good thing.

Week 2 will be interesting to look at from a ratings perspective, however. Thursday Night Football features a Bucs-Panthers matchup on NFL Network that was already regionally focused, and now features a pair of teams coming off disappointing losses in Week 1. The same is true for the Browns-Jets Monday Night Football matchup, at least in terms of the “disappointing losses” qualifier. Nothing has really changed with Eagles-Falcons on Sunday Night Football, and the early windows should get a bump with the Packers, Steelers, and Patriots all playing. Saints-Rams as the featured game in the late window will also be interesting, as there may be some increase in interest based on the ending of last year’s NFC Championship game.

My prediction: the Sunday afternoon windows are up, but all of the primetime windows are down. I don’t think this is too bold of a take, given that SNF a year ago featured Giants-Cowboys and MNF featured Seahawks-Bears.