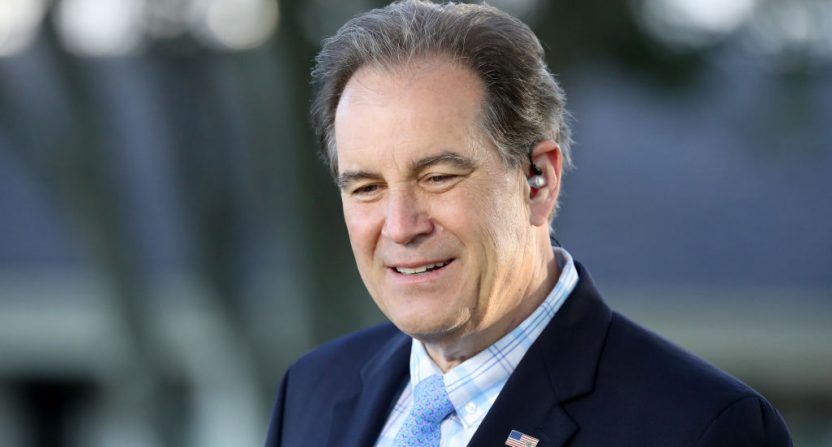 Jim Nantz has always had busy stretches throughout the year as CBS’ signature play-by-play voice. From March through April, he’s calling college basketball and the NCAA Tournament, followed by the Masters. Then in the fall, the NFL regular season and playoffs take up a five-month chunk of the calendar.

But the COVID-19 pandemic has forced the sports industry to cancel, postpone, or reschedule many of the year’s biggest events. That could make Nantz a very busy broadcaster from the end of 2020 through the first quarter of 2021.

In an interview with Sports Broadcast Journal’s Dan Mason, Nantz explains that the decision to move The Masters to November — and fitting that into a schedule that already includes the NFL season (and Super Bowl LV), the NCAA Tournament, and the PGA Championship — could result in him calling events every week for six consecutive months.

“My wife and I were talking about this last night but going into the year I wasn’t scheduled to do all of the PGA events as we went into the summer. With all the big events that are potentially scheduled, I could essentially have the most demanding stretch of my career.

“I love to work and frankly I’ve never been comfortable taking weeks off. If the world is centered again, I could go from the newly scheduled Masters date in November of this year to the PGA Championship in May 2021. That’s pretty much six consecutive months of on-air broadcasting week in and week out, with the NFL and NCAA tournaments in between.”

Nantz definitely isn’t complaining. That would come across badly during a time when so many are out of work because of the coronavirus crisis. He’s just observing the unusual circumstances that the sports world shutdown has created.

And as he’s said previously, if a choice has to be made between calling the Masters or a regular-season NFL game in November, Nantz will go for golf. As he put it, “I don’t think there’s any doubt.” But that wouldn’t change the weekly schedule. He’ll be on the call for one event or the other on the weekend of November 12-15.

Of course, Nantz may not be calling any of these events, especially those late in the year, if safety measures and testing procedures aren’t deemed sufficient enough to prevent everyone involved from contracting and spreading COVID-19. We still might not have a Masters tournament. The NFL season might not be played. And with so much uncertainty still pervading college athletics, who knows if there will be a 2020-21 college basketball season (at least as regularly scheduled)?

If this is how Nantz’s 2020 schedule turns out, however, it will be quite a feat for him and everyone at CBS Sports to pull off. That would also mean we have some sports to watch in the latter part of the year, something for which we’re all hoping.