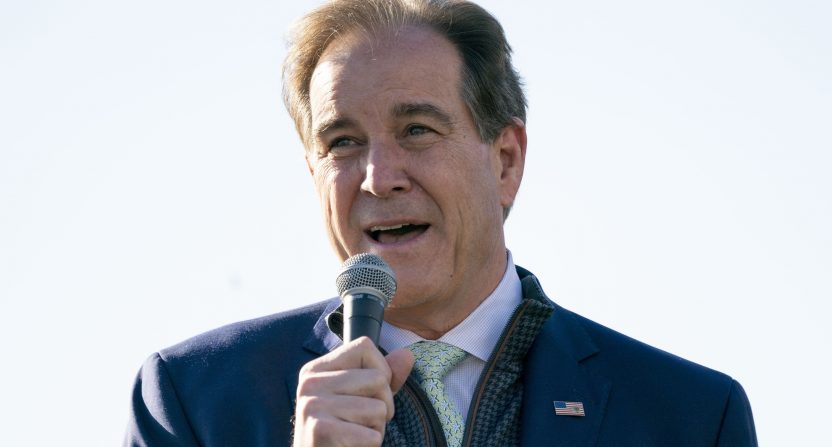 Jim Nantz’s love of golf is quite well known, so much so that his backyard has become an illustration of that passion. He wears many hats as a broadcaster at CBS, and conveniently, his game schedules don’t have much overlap. At the beginning of the year, Nantz’s schedule flows from the NFL, to the NCAA Tournament, to the Masters, and he’s become one of the most recognizable voices of all three events.But this year, the COVID-19 pandemic has changed things up. The NCAA Tournament was cancelled. The Masters was postponed, and will tentatively be played in November. We have no clue what this fall’s NFL season will look like. But if everything falls into place as planned seven months from now, Nantz and CBS will be facing a pickle on their schedule. The Masters taking place during the NFL season means that CBS will have to put a broadcasting jigsaw puzzle together, and it will be extraordinarily difficult for Nantz to call both the Masters and the top NFL game that weekend on CBS.This week, Nantz spoke to Richard Deitsch of The Athletic for a feature, and the topic of the Masters/NFL conflict came up. Deitsch asked Nantz about the potential clash, and Nantz didn’t mince words: he would choose the azaleas, the patrons, and the pimento cheese sandwiches.

“I don’t think there’s any doubt that I will be anywhere other than Augusta National,” Nantz said. “One of the great honors of my life is that I get reminded of The Masters virtually every day. Maybe not so much this year but when things were normal, it is nearly every single day whether I am at meetings or on an airplane or going to an airport. That’s not an embellishment.“So do I think about the Masters from November 12-15? Oh, my goodness, yes. I was already counting the days to this year’s tournament as I traditionally do. No matter where we are on the calendar, I pretty much know how far away we are from gathering there again. There is a lot of things that have to happen between now and then and let’s hope and pray that everything breaks the right way for the world. But I fully expect to be in Augusta on that day if you’re asking me about a collision of the NFL and the Masters on a football weekend.”

I really don’t think anyone would consider this a surprise, and I think it’s even the most sensible option for CBS – this is their most important golf event of the year, and while the NFL is king in the US, Nantz not calling a random Week 10 game isn’t going to raise any eyebrows. After all, Joe Buck and Kevin Burkhardt take time out of the NFL’s schedule on Fox for the World Series, and no one begrudges them or Fox for that.I’m more interested in what Tony Romo would do during Week 10 for CBS if Nantz takes the weekend off from the NFL. Would CBS give him a bye week too? Would they shake up other broadcast crews just for a weekend to keep Romo involved? Would they pair him with a different play by play broadcaster?At this point, we just have one puzzle piece in place for that November weekend, with many more still needing to be sorted out.[The Athletic]