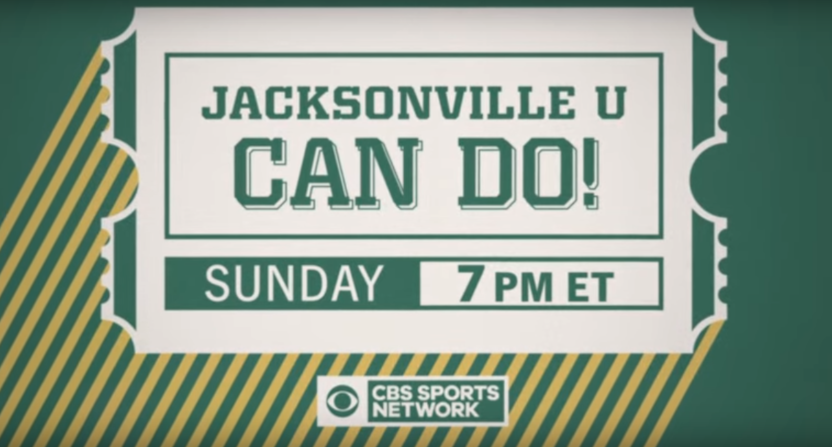 Fifty years ago, Jacksonville University (then with an enrollment of just 2,200) became the smallest university to reach the NCAA men’s basketball championship game. The Artis Gilmore-led Dolphins made an incredible run through the 1970 NCAA Division I Men’s Basketball Tournament, taking down the likes of Big Ten champion Iowa and top-ranked Kentucky (the latter in the regional final) along the way before eventually falling 79-70 to John Wooden’s UCLA Bruins in the championship game. Now, there’s a documentary coming out on that improbable run by the Dolphins (who had been playing in the NAIA just a few years earlier), called Jacksonville U: Can Do! It will premiere on CBS Sports Network Sunday night at 7 p.m. Eastern.

Here’s more from the CBS release:

The documentary is narrated by acclaimed stage and screen actor, Terrence Mann, who was a student at Jacksonville University when the Dolphins made their historic run to the 1970 national championship game. It highlights the Dolphins’ monumental victories over Big Ten Champion Iowa and top-ranked Kentucky. Williams built the program from the ground up, transforming a team that had been in the NAIA just five years earlier into the first ever to average more than 100 points per game. Jacksonville University also became the smallest school in the modern era to reach an NCAA Final.

…The documentary highlights the program’s integration in 1968 and explores how the Dolphins’ success helped unite a city that was still dealing with racial unrest and trying to break free from its segregated past.

Here’s a trailer for that:

The film includes interviews with Gilmore and fellow Naismith Memorial Basketball Hall of Famer Dan Issel, Collegiate Basketball Hall of Famer Sidney Wicks, long-time Sports Illustrated writer Curry Kirkpatrick, long-time broadcaster Mike Patrick, and more. It’s produced by Brian Davis, is certainly an interesting story, and one that hasn’t always received a lot of national attention. For those interested in NCAA basketball history, this may well be worth a watch.