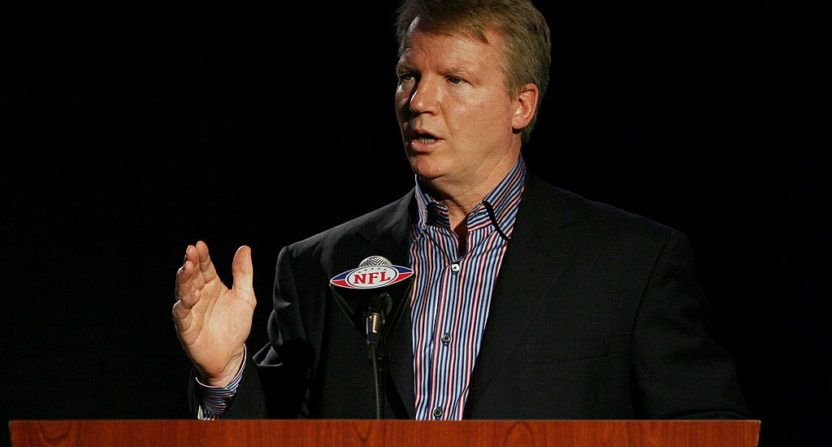 Simms will join a slimmed down James Brown, Bill Cowher, Boomer Esiason, and newcomer Nate Burleson for the 50th year of the NFL Today pregame show. Simms, who subbed in for a suspended Craig Carton Thursday morning on New York City’s WFAN morning show with Esiason, spoke with Awful Announcing last week about moving on from a role he held for 19 seasons, since CBS regained NFL rights in 1998.

Simms was asked if losing the lead analyst role to Romo is a blow to his ego, how he intends to improve the NFL Today product and what the biggest misconception in pro football is right now.

Note: This interview has been edited for length and clarity.

Firstly, what’s your adjustment going to be like in traveling less for games as an analyst and being in the studio more?

I love traveling less. It’s the greatest thing that’s ever happened to me in my life. So that’s one good thing.

I mean I took a trip about three weeks ago, I had to go visit some family in Kentucky, and I just went “oh my god, the security line.” The flight’s delayed. It was this, it was that. And I said, I’m not gonna have to do that 65 times this year.

And the studio’s gonna be fine. I’m gonna cover football and spend more time with what I want to do with football. I’m gonna be able to cover some broader subjects. Will I’ll miss diving into a game and knowing everything about teams? Yeah, I’ll miss that. I’ll miss practices, talking to coaches, especially coaches that will confide in me and tell me everything, knowing that I’ll know what to do with it. I’ll miss that. Because that was the best stuff.

Is it a blow to your ego, not doing these games? How do you see it?

No, not at all. I have not felt that way [for] one second.

You’re not yelling at me…

I know. So I’m fine. I love it. I love the fact that I’m gonna go on the show. I wish I could do an hour with no commercials with the guys, and we could really do what we could do. That would be awesome. But then I wouldn’t be getting paid…

They say you’re going to mix it up more on The NFL Today like you do on Showtime. What exactly does that mean?

I’ll disagree with you in a heartbeat. I have true beliefs. I watch all the games. I’ll do all that so my opinions, I believe in them and stay with them. And “mix it up” is like what you and I just did.

People say things and [others will] go “well that’s moronic.” Or Boomer could say something and I’ll disagree…Look, if you’ve ever watched us on Showtime, that’s called mixing it up. Like things out of nowhere.

We’ll do an opening talk every week on Showtime. And I’ll have three names, or my three quick reads or whatever. And somebody talks, Boomer talks, and I’ll look at my three things and say “nope, I’m going after what they just said.” And we do it, and we laugh and we have fun, and it gets my point across. And we do it that way.

It’s always been my comfort zone. Doing games was the comfort zone. It’s having fun talking about football. That’s the way I look at it.

Last question: What do you think the biggest misconception in the NFL is right now?

Oh I don’t know. I can’t think that fast. Well there’s a lot of them. How about that quarterbacks are strictly judged on their won-loss record? That’s the biggest misconception.

We heard all about that with Matthew Stafford [when he got his contract extension]. “Well, how many playoff games has he won, nil? And what’s his QBR?” Like I give a crap what his QBR is. I think I know greatness when I see it. I didn’t say good. Greatness.

It just drives me crazy. It really does. No matter what, everything is judged “how many Super Bowls have they won? How many playoffs? What’s their record?” It’s not that simple.