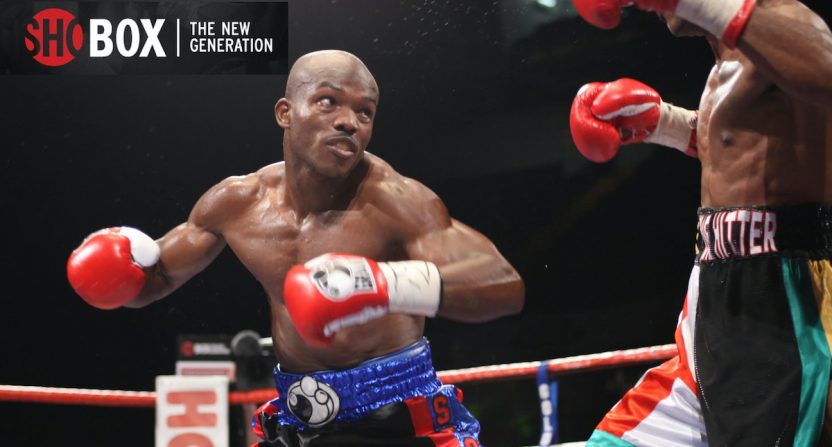 With ShoBox: The New Generation, Showtime Boxing has provided a showcase for the sport’s prospects, introducing young fighters to a national cable audience and giving diehard fans an opportunity to follow their careers as they move up the rankings.

The show celebrates its 20th anniversary on Friday night (July 23) with a three-fight card from Grand Island, Nebraska that airs on the premium cable network at 9 p.m. ET. Undefeated super middleweights Klavin Henderson (14-0-1, 10 knockouts) and Isaiah Steen (15-0, 12 KOs) clash in the headline bout, preceded by undefeated featherweights Martino Jules and Aram Avagyan facing off, and Janelson Bocachica matched up against Shinard Bunch.

“When the idea was presented about putting on a series of unknown prospects in the infancy of their careers, in step-up fights, it was unique at the time, it hadn’t really been done,” said Hall. “We were all on board to try and make it happen, but I don’t know if there was a lot of optimism about it as a long-term play. But we did know that if we could get top prospects, that would give us something to hang our hat on.”

Hall believes that ShoBox’s successful formula, providing exposure that previously wasn’t available, has been good for fighters, but also good for boxing overall. In the past, fights with unknown boxers were “dark bouts” that didn’t get televised, relegated to the early evening or late afternoon before a telecast began. And the matchups were often not very competitive.

“Boxing’s been a fairly regular staple of television programming since the ’40s,” added Farhood, “and it’s kind of amazing that ShoBox was the first show of its kind to feature prospects — and pretty much only prospects. 20 years later, there’s still only ShoBox.”

Farhood, a boxing historian who’s been editor-in-chief for The Ring and KO Magazine, also pointed out that Showtime was the ideal place for a series featuring boxing prospects because those fighters could elevate to contenders and compete on Showtime Championship Boxing. No other network could follow boxers along that same path, helping spur their development into proven competitors worthy of title opportunities.

“Boxing is not like other sports,” said Farhood. “In boxing, odds are only hardcore boxing fans know who a prospect is. He fights once on television, scores a second-round knockout, and all of a sudden, he’s known throughout the industry — from one performance on national television. The medium is the message, maybe more so in boxing than any other sport.”

However, one important lesson Hall and Farhood have learned, even before the past 20 years of ShoBox, is not to judge a boxing prospect on one fight. Fighters like Tyson Fury and Deontay Wilder did not perform well in their first Showtime fights.

Bringing fighters back for subsequent bouts can be important. More than a dozen boxers have eventually won world titles after losing on ShoBox.In addition to Fury and Wilder, other names that have appeared on the program and gone on to win world titles are Timothy Bradley, Robert Guerrero, and Errol Spence Jr.

Bradley put the show solidly in the spotlight, becoming the first boxer to win a world title on ShoBox, defeating British fighter Junior Witter in England in 2008. That fight — and Bradley’s victory — was an important moment for ShoBox, confirming that it had made an impact on boxing.

In addition to top prospects and competitive match-ups, ShoBox has also presented a strong product for viewers with prominent, established broadcasters calling the fights. Those who have auditioned for the play-by-play role include Joe Tessitore, Mike Goldberg, Biran Kilmeade, and Gary Apple.

The late Nick Charles, a longtime anchor of CNN’s sports coverage, was the voice of ShoBox for the first 10 years of the program, bringing instant credibility to the venture. Curt Menefee succeeded Charles as the play-by-play announcer, along with his work for Fox NFL Sunday, for two years. And since 2012, veteran broadcaster Barry Tompkins has called the ShoBox bouts alongside Farhood.

Tompkins has covered plenty of sports during his career, including college basketball, tennis, cycling, and Pac-12 football. But he’s probably best known as a boxing broadcaster, having called fights on HBO with Larry Merchant and Sugar Ray Leonard, in addition to his work for ESPN and Fox Sports. As a familiar face — and voice — for longtime boxing fans, Tompkins provides a link to the past and a bridge to the future.

“If you’re a baseball fan, it would’ve been pretty cool to have watched Derek Jeter or Mike Trout play in Triple-A,” said Farhood. “But there are no Triple-A games televised nationally. Thanks to ShoBox — on Showtime, a national network — you get to see the ‘Triple-A’ fighters who are coming up, some who make it, some who won’t.”

The July 23 card continues the ShoBox mission, taking fighters with sterling amateur careers and providing the opportunity to advance their professional careers with national TV exposure. Friday’s anniversary show will also include flashbacks to past ShoBox fights, acknowledging the show’s impressive legacy, one that the boxing community has embraced.

“We go everywhere in the country, nowhere necessarily that attractive, to do these shows,” said Hall. “But it’s not about the sights. It’s about the fights.”