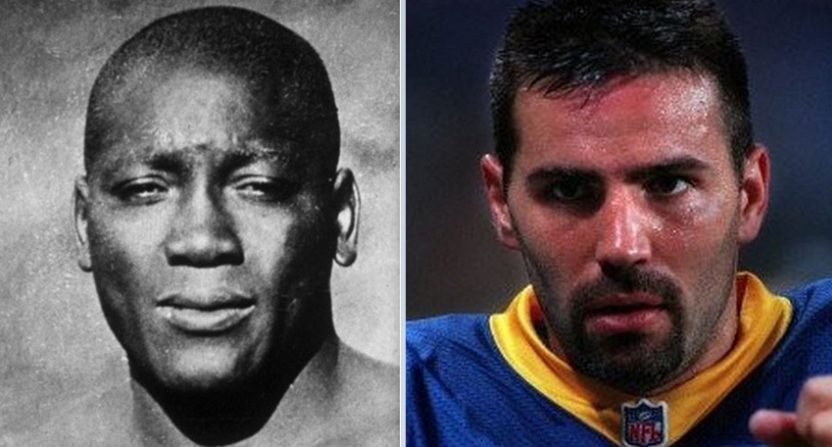 Two upcoming sports dramatizations have cast the leads for their subjects. One of those projects will be headlined by a two-time Academy Award winner.

Mahershala Ali has been cast as Jack Johnson for HBO’s six-part limited series on the boxing legend, titled Unruly. As reported by Deadline’s Nellie Andreeva, the miniseries will be based on Ken Burns’ 2004 PBS Documentary Unforgivable Blackness: The Rise and Fall of Jack Johnson. (An accompanying book was written by Geoffrey C. Ward.)

Ali previously portrayed Johnson on stage in 2000’s The Great White Hope and has previously said that playing the boxer is one of his dream roles. He’s also an executive producer on the series with his Know Wonder production company, along with Tom Hanks’s Playtone Productions. Beau Willimon (House of Cards), who had been developing a Johnson project since 2013, will also executive-produce.

The six episodes will cover Jackson's rise as the first ever Black heavyweight boxing champion and the obstacles he faced due to his color. pic.twitter.com/kkifYxkXGg

Nicknamed “The Galveston Giant,” Johnson was boxing’s first African American heavyweight champion in 1908, defeating Tommy Burns to win the title. Prior to their bout, the bold, outspoken Johnson challenged Burns frequently to fight him, following him around the world to taunt him to the press.

Burns finally gave Johnson a title shot, but only after he was guaranteed $30,000 (roughly $700,000 in today’s dollars) by promoters. With 20,000 fans in attendance, the match lasted 14 rounds before the police intervened and Johnson was declared the winner.

As could be expected in 1908, white fans weren’t happy about a Black man being heavyweight champion and sought a “Great White Hope” to defeat Johnson.

One of the challengers was former champ James J. Jeffries, who refused to give Johnson a title shot when he held the belt. Jeffries was coaxed out of retirement by a large payday ($120,000; $3.3 million in today’s dollars) to fight Johnson in 1910, but lost what was then billed as “The Fight of the Century” in 15 rounds when his corner threw in the towel. Unfortunately, the result touched off race riots throughout the country and the murders of many Black people.

Johnson finally lost the heavyweight title in 1915 to white boxer Jess Willard in Cuba. The fight ended in 26 rounds and was originally scheduled for 45!

Kurt Warner will be honored during halftime at Sunday's season opener.

The other sports biopic to cast its lead is American Underdog: The Kurt Warner Story. Zachary Levi (Shazam!) will play the Hall of Fame quarterback in a faith-based film that was put into production in February with the intent of a late-December theatrical release. COVID-19 shutdowns of movie and TV productions likely affected that schedule, however.

Warner’s bumpy path to football greatness certainly seems like strong basis for an inspirational film. He worked as a grocery stock clerk at one point before finally catching on as a backup NFL quarterback. In 1999, he became the St. Louis Rams’ starting QB after an injury to Trent Green, leading the team to a 13-3 record and Super Bowl championship.

Beyond pumped for this one. Have always found @kurt13warner, and his family, and their journey, to be an uplifting and inspiring one. Can’t wait to bring their story to screens both large and small. ? Big thanks to the @erwinbros and @lionsgate for trusting me with donning lucky #13. ??? . @entertainmentweekly Zachary Levi is taking the field for his new role. Hit our link in bio for more on the #Shazam actor turning into an NFL star for the Kurt Warner biopic. ?: Michael Tullberg/Getty Images; David Madison/Getty Images

The quarterback played in two more Super Bowls and won two NFL MVP awards during a 12-year career, passing for more than 32,000 yards and 208 touchdowns. He was inducted into the Pro Football Hall of Fame in 2017 and now works as a broadcaster for Monday Night Football radio broadcasts on Westwood One.

A major part of Warner’s story has been his strong religious faith, which will presumably be the foundation of this upcoming film. Based on his memoir, All Things Possible: My Story Of Faith, Football and the First Miracle Season, in addition to interviews with Warner himself, the movie will be directed by Jon Erwin and Andrew Erwin (I Still Believe).