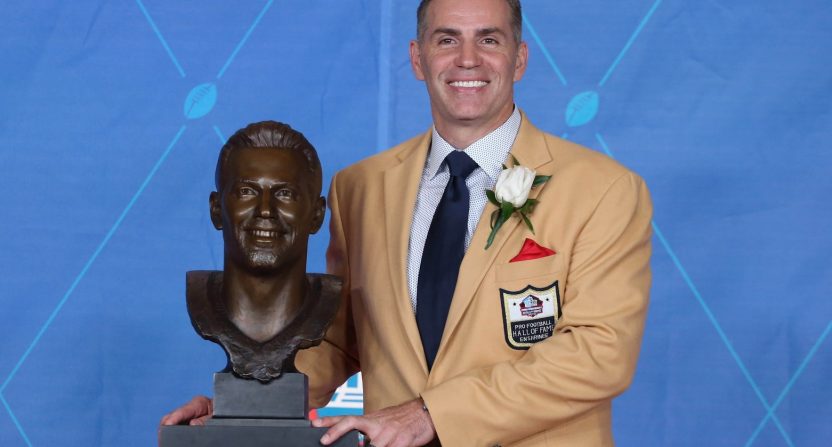 If you’ve always thought that Kurt Warner’s improbable story — going from grocery stock clerk to NFL quarterback to Super Bowl champion to Pro Football Hall of Famer — would make a great movie, you’re right!As reported by TheWrap’s Brian Welk, Lionsgate is fast-tracking the development of a film based on Warner’s life for a Dec. 18, 2020 release. American Underdog: The Kurt Warner Story is being written by David Aaron Cohen, who wrote the script for the Friday Night Lights movie, along with directors Jon Erwin and Andrew Erwin. The Erwin brothers’ film I Still Believe will hit theaters on March 13. Casting for Warner and his wife Brenda has not yet been announced.Warner began his NFL career as a no-name backup quarterback taking over for the injured Trent Green with the then-St. Louis Rams. However, Warner led the Rams to a 13-3 record and Super Bowl championship during that 1999 season. Two seasons later, the Rams had a 14-2 record behind Warner and lost Super Bowl XXXVI to the New England Patriots.https://twitter.com/RamsNFL/status/905512609188859905Being left open to a greater number of hits in Mike Martz’s wide-open offense, Warner wore down and was eventually released by the Rams in 2004. After a one-season stint with the New York Giants as Eli Manning’s presumed mentor, Warner revived his career with the Arizona Cardinals, battling Matt Leinart for the starting quarterback position through three seasons before winning the job outright and leading the team to its first Super Bowl. The Cardinals lost Super Bowl XLIII to the Pittsburgh Steelers, 27-23.Warner played one more season, earning a playoff victory over the Green Bay Packers, but hip injuries and concussions compelled him to retire after the 2009 campaign. During his 12-year NFL career, Warner passed for more than 32,000 yards and 208 touchdowns, completing nearly 66 percent of his passes, and won two NFL MVP awards. He jumped right into broadcasting after his playing career ended, providing analysis for NFL Network and later on Westwood One for radio broadcasts of Monday Night Football. Warner was inducted into the Pro Football Hall of Fame in 2017.Throughout his playing days and current career as a broadcaster, Warner’s strong religious faith has been a prominent part of his story. That will be the case for his movie biopic as well. The film will be based on interviews with Warner in addition to his memoir, All Things Possible: My Story Of Faith, Football and the First Miracle Season. Faith-based films such as Miracles From Heaven, God’s Not Dead, The Shack, and Heaven is For Real have found wider audiences in theaters and made hundreds of millions of box office dollars during recent years.Lionsgate has found success with faith-based movies partnering with Kingdom Story Company, which will include the aforementioned I Still Believe, based on the story of Christian pop star Jeremy Camp. Now the studio is hoping to reach sports fans by bringing Warner’s story to the screen.[TheWrap]