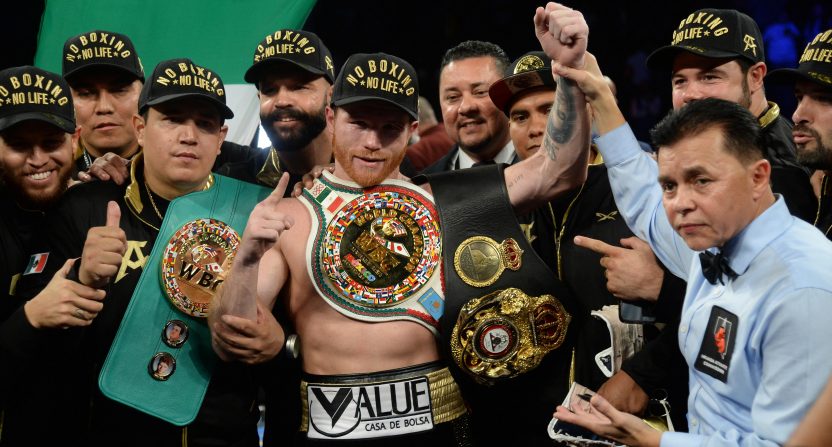 It’s no secret that DAZN has invested a lot of time, energy and money into boxing, and the May 4 middleweight title unification fight between Canelo Alvarez and Daniel Jacobs is one of the streaming service’s biggest events to date.

DAZN has the exclusive rights for Alvarez’s fights, paying $365 million for an 11 fight deal last fall. Naturally, DAZN will be promoting the hell out of Alvarez and his fights, and has added supplementary coverage for the Jacobs fight this week in the form of a docuseries.

The streaming service announced a partnership with LeBron James and Maverick Carter’s Uninterrupted production company to produce a new documentary series on the lead-up to the fight, entitled 40 Days.

We are pleased to announce that @UNINTERRUPTED is set to produce a new docu-series titled “40 DAYS” in lead up to #CaneloJacobs. ? pic.twitter.com/87HYlmizoN

The two-part series will take viewers behind-the-scenes of Alvarez’s training for the fight with Jacobs. Part 1 is set to premiere on Uninterrupted’s website and DAZN on April 23, with Part 2 following on April 30.

Similar prefight documentaries have been produced, most notably HBO’s 24/7 series that was also expanded into other sports. While neither DAZN nor Uninterrupted opened up the possibility of future collaborations, it’s easy to speculate that a variety of similar series could eventually come, with heavyweight champion Anthony Joshua’s first fight in the United States immediately coming to mind as a potential focus point.