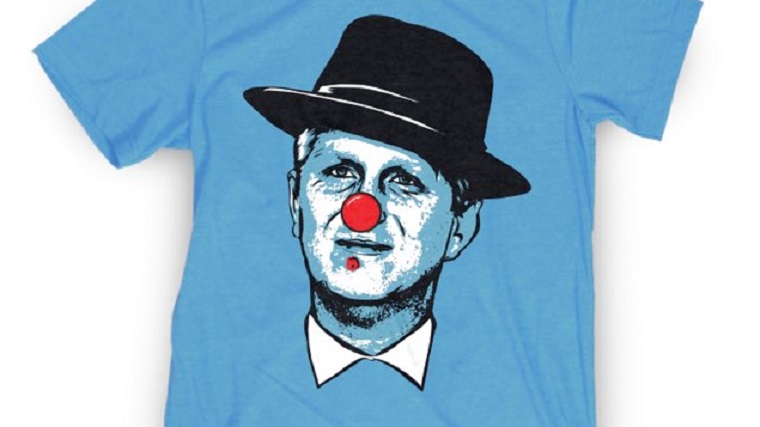 For those who prefer their sporting events to play out on Twitter, Barstool Sports provided more entertainment than NBA All-Star Weekend, the Winter Olympics or Daytona 500 by firing Michael Rapaport for criticizing the site’s loyal fans and supportings. The subsequent Twitter war between Barstool founder Dave Portnoy and Rapaport kept fans refreshing their Twitter feeds throughout the weekend.

Maybe the most amusing development from the Portnoy-Rapaport spat and the break with one of the site’s better known personalities (at least to a mainstream audience) was Barstool quickly designing a new t-shirt poking fun at Rapaport.

An image of him with a clown nose on his face resembled previous merchandise (beginning with rally towels) that Barstool made to slam NFL commissioner Roger Goodell. The site now features a line of apparel devoted to Goodell’s clown face. It’s basically become a signature image for the site.

If the Rapaport clown tee wasn’t the most amusing development (NFL Network reporter Ian Rapoport inadvertently being pulled into the fray might win that title), it was most certainly a very profitable one.

Whether being mocked by Portnoy irritates him more or his likeness being used for profit without his approval, Rapaport had his lawyer issue a cease and desist letter to Barstool on Monday. Portnoy shared the letter with readers later in the evening. Addressed to Barstool CEO Erika Nardini, the letter reads in part:

“We are writing to demand that Barstool Sports, Inc. (“Barstool”) immediately cease and desist from the sale of any merchandise that depicts an image, or the likeness, of Mr. Rapaport. This includes, but is not limited to, the t-shirt currently for sale at on Barstool’s website at the following URL, https://store.barstoolsports.com/products/rp-clown-tee?variant=2622389354517. Barstool has no legal or contractual right, without my Client’s consent, to sell any merchandise bearing his image and/or likeness.”

As you would expect, Portnoy was hardly intimidated by the cease and desist letter, choosing instead to mock Rapaport for lawyering up.

“BAHAHAHAHAAHAHAHAH! Look at internet tough guy Michael Rapaport go! All tough on twitter talking that shit! Just furiously sending tweets left and right about how everybody at Barstool is a pussy and how tough he is. How he was the “Ric Flair” of Barstool. Meanwhile behind the scenes he’s picking up his phone and calling his lawyers begging for their help to stop this bloodbath. I mean this is marshmellow soft. Honestly what a fucking horrible look for the self proclaimed king of shit talking. Now he’s getting his panties in a bunch over a tshirt.”

If Rapaport making this a legal matter was his attempt to be the adult in this conflict, Portnoy countered nicely with “I’m not mad. I’m just disappointed.” (Though that probably doesn’t help from a legal standpoint.)

Naturally, Portnoy doesn’t appear interested in taking the t-shirt off the virtual shelf and plenty more Barstool supporters have purchased the item to support their favorite site. Whether or not Rapaport has firm legal ground to stand on here or if the image would be protected as satire could be intriguing to follow if this matter develops further.

Several fans have questioned whether or not the feud between Portnoy and Rapaport is legitimate or the latest reality-show type of drama that Barstool’s fans enjoy so much from the personalities they follow. Portnoy told TMZ that this is indeed for real and Rapaport was fired. But this t-shirt dispute is only feeding more coal into the furnace. The Barstool-Rapaport conflict probably isn’t fading away anytime soon.