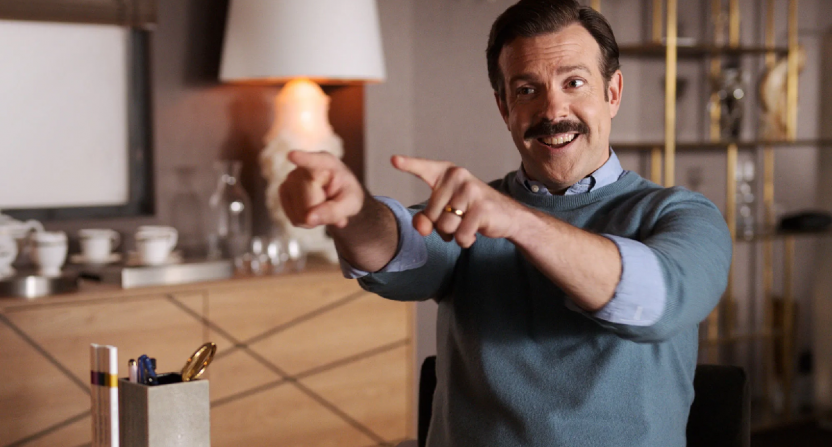 The Writers Guild of America handed out their annual awards last night, and as has been the case for most of the year-end awards circuit, Apple TV’s Ted Lasso took home multiple trophies, winning awards for Comedy Series and New Series.

Award recognition is a big deal for a new streaming service, even one backed by one of the most powerful companies on the planet. (Though the WGA ceremony came too late for Quibi, which also saw a show take a win.) It also helps secure additional seasons of production for a series, though last fall it was confirmed that Apple had already given Ted Lasso a three season order, somewhat rare for a show coming off just one season, but certainly well-deserved.

The show recently started production on Season 2, which is currently scheduled to be released this summer.

Recently, though, series co-creator Bill Lawrence (Scrubs, Cougar Town) reaffirmed that Ted Lasso is currently scheduled to end after its third season, a creative decision as unfortunate as it is understandable.

Via Kelsey Sutton at AdWeek:

“[We] had a clear three-season story—we know the story that we’re currently telling, we know the beginning and the middle and the end of it,” said Bill Lawrence, who co-created the series with Sudeikis, Joe Kelly and Brendan Hunt. “Is there more story for Ted Lasso beyond that? If you ask me, because I’m still part-producer and businessman at the end, I’m like, ‘Yeah! Ted Lasso is going to be a different coach of a different sport every year for the next 50 years. Is that OK?’”

The three-season arc they have planned is understandable. Being able to go into a project knowing the story you want to tell and then getting the production order to actually fulfill that vision is still not that common in television today. If anything it’s harder; streaming services want new content constantly, and that churn can lead to some good shows not being allowed to finish their creative arcs.

That said, Ted Lasso has taken off in  ways that even incredibly optimistic supporters of the show have to be surprised by. It’s possibly the best scripted sports show ever, and it manages to work on just about every possible level. It’s funny, sweet, sad, endearing, and hopeful. That we might only get thirty episodes feels a bit disappointing, even though more obviously isn’t always better. It’s a world that people have already been revisiting multiple times via rewatch, and it’s not one that anyone seems likely to want to leave any time soon.

To that end, Lawrence did leave the door open, albeit with one important caveat:

“We will probably keep going as long as Jason is having a fun time doing it.”

Sudeikis has already picked up a Golden Globe for playing the character, and he has to be the Emmy favorite, too, at this point. If he wants to find new ways to extend the character, there will certainly be an audience willing to travel that path. There’s also something to be said, though, for ending at the the natural point for the story. It’s a tough call for everyone involved, but if there’s one group of people worth trusting, it’s the Ted Lasso creative team.